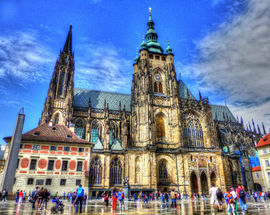 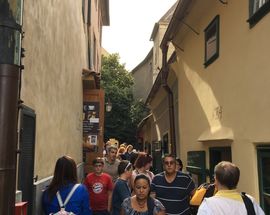 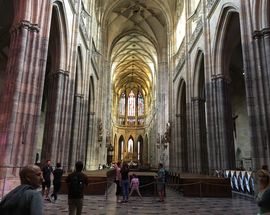 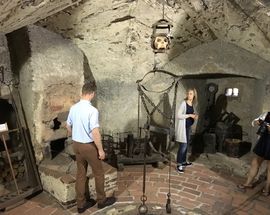 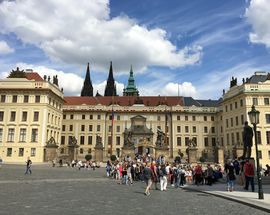 The defining monument on Prague’s picturesque skyline, Prague Castle today is the seat of the president and an important historical and cultural testament to the country.

There are four ways to approach the castle. By far the best way is to take tram N°22 to the Pohořelec stop, where you start with breathtaking views of Prague from Strahov Monastery; then walk down through the beautiful Hradčanská district along Loretánská towards the main castle entrance on Hradčanské náměstí. You can skip the Hradčanská walk by getting off the tram earlier, at the Pražský hrad stop, from where you enter the second courtyard. Alternatively, walk up Nerudova and the steep hill from Malostranské náměstí. The worst approach is up the Staré zámecké schody steps near Malostranská metro station; these are best kept for the way down.

Its current status dates way back and the complex in some form has experienced nearly all events of importance throughout the centuries. Research dates the founding to around the year 880 by Prince Bořivoj. This medieval structure was more of a fort with a moat and clay and stone ramparts. The Church of Virgin Mary was the first house of worship here with churches dedicated to St. George and St. Vitus coming along in the first half of the 10th century.

Already in the 10th century, Prague Castle was the representative governing site. Here you had the seat of the head of state, princes and later kings as well as the Prague bishop. The first convent in Bohemia was also founded on the grounds of Prague Castle, built for an order of Benedictine nuns next to St. George’s.

The towering St. Vitus is really what you are viewing when you gaze at Prague Castle from down below. Built on the site of the original rotunda, it was the main castle church beginning in the 11th century. Relics of Bohemia’s patron saints were kept here including St. Vitus, St. Wenceslas and St. Adalbert.

As with most of the rest of Prague, the Castle area flourished under King and later Emperor Charles IV in the middle of the 14th century. This was when it first became an imperial residence as the seat of the ruler of the Holy Roman Empire. The royal palace was magnificently rebuilt and the fortifications strengthened. Building began on the Gothic church of St. Vitus, modelled after French cathedrals.

Although the Castle’s prosperity continued during the reign of Charles's son, Wenceslas IV, the Hussite wars in the 15th century saw the Castle go uninhabited with its buildings and fortifications falling into disrepair. Towards the end of the century, new rule brought a revamping of the Castle with the Powder Tower, New White Tower and Daliborka built on the property’s northern side. This is also when the royal palace was rebuilt and the fabulous Vladislav Hall added.

When the Habsburgs moved in, they brought a renaissance flair to the place. Garden lovers, this is when the Royal Garden was designed and along with the Summer Palace, the Ball Game Hall, a shooting range and the Lion's Court.

After Charles IV, Rudolph II was probably the Castle’s most influential resident. During his rule in the second half of the 16th century, the emperor settled permanently here and began to turn it into a grand centre of his empire. He is responsible for the northern wing of the palace (today home to the Spanish Hall), built specifically for his artistic and scientific collections.

The last great rebuilding of the Castle was carried out in the second half of the 18th century, however by that time Prague had lost its European dominance to Vienna and was a pretty insubstantial town. Emperor Ferdinand V chose Prague Castle as his home in 1848 and had the Chapel of the Holy Cross rebuilt. The Spanish Hall and the Rudolph Gallery also got a makeover. There were also calls to finally finish St. Vitus, not by Ferdinand though but by the patriotic Union for Completing the Cathedral of St. Vitus. Despite their efforts, the Cathedral wasn’t completed until 1929.

After the declaration of an independent Czechoslovak Republic in 1918, Prague Castle again became the seat of the head of state. Under communism, many of the palaces were closed to the public, operating as various government institutions. This changed after 1989.

Still today, Prague Castle is of great importance to the city and country as a whole. The Crown Jewels are kept here, as are the relics of Bohemian kings, Christian relics, art treasures and historical documents. At the same time, significant events of national importance are still held at Prague Castle. The complex is truly a bridge from the past to the present.

Prague Castle
featured
/prague/st-vitus-cathedral_1137v
Moving into the third courtyard of the castle you’ll face one of Europe’s great Gothic cathedrals. St. Vitus is the spiritual heart of the nation as the …
see more
Featured
Castles & Palaces

Hradčanské nám. 16
/prague/archbishops-palace_1130v
The early Renaissance Archbishop's Palace is not open to the public, but if you look carefully at the heraldic device on the front of the building you can spot …
see more
Towers

Prague Castle
/prague/daliborka-tower_1704v
Built in 1496 and used as a prison till the end of 18th century, the tower stands on your left as you exit the Golden Lane. It is so named for its first …
see more
Places of Interest

Prague Castle
/prague/first-courtyard_1131v
Pause at the castle gates to admire the soldiers' uniforms (designed by the wardrobe designer of the film Amadeus), and hopefully see the changing of the …
see more
Streets & Squares

Prague Castle
featured
/prague/golden-lane_1124v
The phrase 'picturesque street' might have been invented to describe this tiny cobbled lane with its miniature workers' cottages. After a lengthy …
see more
Featured
Prague Castle

/prague/hradcany_1132v
The area known as Hradčany is actually all the buildings on the top of the hill. The first buildings date from around the year 880, but the castle's golden age …
see more
Castles & Palaces

Prague Castle
/prague/old-royal-palace_1526v
One of the oldest and most impressive parts of the castle, the Old Royal Palace dates from 1135 and was the seat of Bohemian princes. From the 13th to the 16th …
see more
Parks & Gardens

Valdštejnská 12-14
/prague/south-gardens_1133v
Also referred to as the Palace Gardens, these are actually three gardens built on the remains of the the bulwarks on the south side of the castle. As such they …
see more
Parks & Gardens

Prague Castle
/prague/royal-gardens-stag-moat_1139v
North of the castle walls are a succession of orderly and manicured gardens. They were first laid out in 1534 and are home to the Míčovna or Ball Game Hall, …
see more
Castles & Palaces

Hradčanské nám. 2
/prague/schwarzenberg-palace_1135v
The most distinctive and largest of the buildings on the cobbled square sweeping into the castle is this palace with decorated bricks - are they flat? Built …
see more
Places of Interest

Prague Castle
/prague/second-courtyard_1134v
Reconstructed by Empress Maria Theresa, this courtyard acts as an intersection point for two of the entrances into the castle. You can exit under the archway …
see more
Castles & Palaces

Hradčanské nám. 15
/prague/sternberg-palace_1138v
Sharing an entrance with the Archbishop's Palace is the Šternberský palác from 1698. It's part of the National Gallery and home to their collection of Old …
see more
Churches

Prague Castle
/prague/st-georges-basilica_1136v
The basilica is the Romanesque church lurking behind a Baroque facade in the courtyard behind St. Vitus. Now deconsecrated, it serves as a concert hall. In the …
see more
Castles & Palaces

Hradčanské nám. 185/2
/prague/salm-palace_145390v
This large classicist building sits just outside the main entrance to Prague Castle on Hradčanské náměstí. Its current look is courtesy of a radical …
see more
Museums

Prague Castle
/prague/treasury-of-st-vitus-cathedral_146155v
One of the newer permanent exhibitions at Prague Castle, the Treasury is the largest in the country and one of the most significant church treasuries in …
see more
Museums

Prague Castle
/prague/picture-gallery-at-prague-castle_146156v
Launched by Emperor Rudolf II, an intensive collector of art from artists across the Holy Roman Empire, the collection once amounted to 3000 pieces. The …
see more
Towers

Prague Castle
/prague/powder-tower_146151v
Originally built as a cannon tower, the Powder Tower unfortunately never got to showcase its prowess. It was put to use as the home of Tomáš Jaroš, best known …
see more
Museums

Jiřská 6
/prague/toy-museum_1165v
Probably better for the young at heart then the truly young, Prague’s Toy Museum is located in the Prague Castle complex and does indeed have a massive …
see more
Galleries

Prague Castle
/prague/story-of-prague-castle_151461v
The Old Royal Palace contains The Story of Prague Castle exhibition which offers a fascinating look into the history of this remarkable complex. Make sure to …
see more
Towers

Prague Castle
/prague/great-south-tower_151462v
In nice weather, test your legs with a climb of 287 steps to the top of St Vitus' south tower. Here you can become acquainted with Zikmund, the biggest bell in …
see more