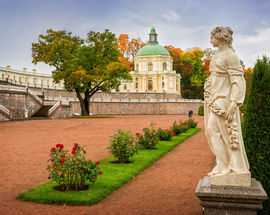 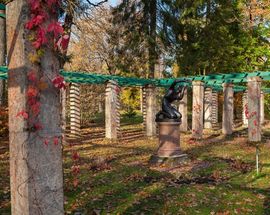 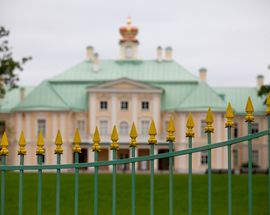 Oranienbaum (Orange Tree) isn’t quite as popular among tourists as other similar palaces, but it's nonetheless a lovely place for a picnic or for a walk through peaceful gardens and pine woods. Still commonly known by its post-war name of Lomonosov, the estate at Oranienbaum is the oldest of the Imperial Palaces around St. Petersburg. Prince Alexander Menshikov, one of Peter the Great’s best friends, started building the estate and its Grand Palace. The Palace is one of the most opulent examples of Petrine architecture to have survived to the present.

In 1743, some years following Menshikov’s death, Empress Elizabeth presented the estate to her nephew, the future Peter III, who made Oranienbaum his official summer residence. Antonio Rinaldi, the Italian-born architect who also designed the Grand Palace at Gatchina and the Marble Palace in St. Petersburg, was commissioned by Peter in 1758 to build a modest stone palace next to the fortress, and this has survived till this day.

After Peter III was deposed, Catherine the Great made it one of her holiday spots and commissioned Rinaldi to build a small Chinese palace in the Upper Park with baroque on the outside and rococo within. Unfortunately, Catherine spent little time at Oranienbaum and eventually even grew to hate it during her marriage to Peter, and by the end of the 18th century the estate had been turned into a Naval Cadet College. Oranienbaum once again became an Imperial residence during the reign of Alexander I, retaining this status all the way up until the Russian Revolution in 1917. After the Bolsheviks came to power, Oranienbaum was immediately transformed into a museum and opened to the public.

Although never captured by the Germans, Oranienbaum was bombarded during the war. While the Grand Menshikov Palace survived intact, its restoration was not as high on the agenda as the more famous estates at Peterhof and Tsarskoe Selo. Today, this elegant little park has been almost completely restored, giving a unique insight into the lives of Russia’s Imperial family virtually since the founding of St. Petersburg itself. The Palace ensemble is on the list of UNESCO World Heritage Sites.

Lomonosov, Dvortsovy pr. 1
featured
/st-petersburg-en/grand-menshikov-palace_9380v
Menshikov commissioned architects Giovanni Maria Fontana and Gottfried Schädel to build his residence from 1710 to 1727. The central part of the Palace is connected by two galleries with two domed Japanese and Church Pavilions. Facing the sea, with a two
see more
Featured

Lomonosov, Dvortsovy pr. 46
featured
/st-petersburg-en/oranienbaum-park_154211v
This park is an ideal place for a long stroll on a beautiful sunny day because it is not as popular among locals or tourists. Some parts of the parkland can still give a fair impression of the carefully planned landscaping carried out in the reign of Cat
see more
Featured

Lomonosov, Verkhny Park 2A
featured
/st-petersburg-en/palace-of-peter-iii_154208v
Built between 1758 and 1762 by Antonio Rinaldi, the small Palace of Peter III is, along with the nearby Gate of Honor, all that remains of Petershtadt, the model fortress that Peter III had built for himself. It is a simple but attractive example of earl
see more
Featured

Lomonosov, Verkhny Park 7
featured
/st-petersburg-en/the-chinese-palace_154210v
The name is deceiving – there is nothing overtly Chinese about this charming building in the southern corner of the park at Oranienbaum. In 1762, Empress Catherine II ordered the construction of the suburb residence called "My Own Countryside House". For
see more
Featured