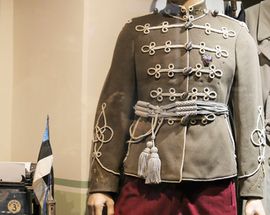 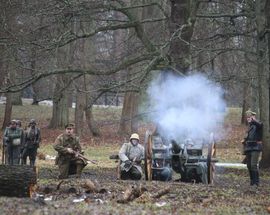 Housed in Viimsi Manor, the former summer residence of General Johan Laidoner who was the Commander‑in‑Chief of the Estonian Armed Forces before the WW II, the Estonian War Museum is a great place to start if you'd like to learn more about this country's history. Over hundreds of years, Estonia has had troops fighting on its soil from Denmark, Sweden, Germany, Poland, Russia and has even hosted a fair share of Viking battles. Inside you’ll find all sorts of displays and stories about the various wars Estonia and Estonians have been involved in.

The exhibition starts with a room dedicated to war history in Estonia since ancient times to the 20th century. The exhibition of WW I depicts the destiny of Estonians who either conscripted or drafted voluntarily to the Russian army during WW I, and later played a crucial part in the battles for gaining independence during the Estonian War of Independence (1918-1920), the story of which is told next.

The period of WW II in Estonia is is reflected through the story of three Estonian men who only had a choice between different foreign armies in this harsh period in occupied Estonia. The highlight of Cold War exhibition is a replica of a winter bunker of Estonian partisans (so-called Forest Brothers).

On the second floor the exhibition of uniforms of the Estonian Defence Forces from 1917-1940 displays 14 historical uniforms of which only two are copies. Display of around 130 firearms and cold arms from the mid-18th century to the 20th century can also be seen.

A display of artillery guns and military vehicles is located 300 m from the museum. The machine pool of the heavy artillery display mainly dates back to the period from 1930 to 1960, and the majority of the items formed part of the armament of various countries in World War II and during the Cold War. The exhibit also features a range of vehicles used by the Estonian Defence Forces in the 1990s and later. One of the highlights of the exhibit is a sauna built and used by the Estonian soldiers at the Camp Bastion base camp in Helmand Province in Afghanistan.

Getting there: Take bus N°1A to Viimsi from the Viru Centre’s underground bus terminal (C-4) and get off at Viimsi vallamaja stop (should be about a 25min ride). Walk back to the main road and turn right, another 50m and it will be the large yellow building on your left.