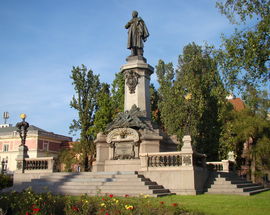 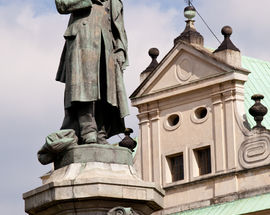 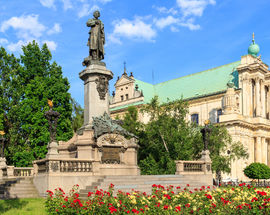 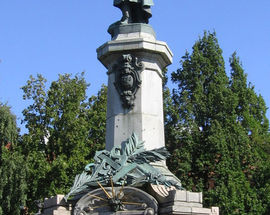 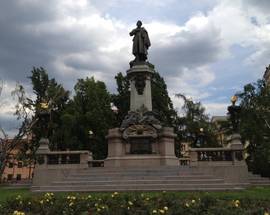 Patriot, poet and the man who inspired Romanticism in Poland, Mickiewicz stands out as Poland's greatest literary figure - as well as a figure of hope during a bleak age of Russian oppression. His involvement in politics saw him exiled east in 1824 by the ruling Russians, before finally heading to western Europe in 1829. A bid to return to his homeland in 1830 was thwarted at the border, and he never saw his native Poland again.

Much mystery surrounds his life; his role as a national cultural icon meaning that much of the seamier side of his life has been covered up, including his involvement in strange cults and alleged womanising. To this day, even his birthplace remains a hot source of argument. Some say Nowogródek (Lithuania), others say the nearby Zavosse (Zaosie). A champion of freedom, he died during a cholera outbreak in Turkey, 1855, while recruiting a Polish legion to fight the Russians in the Crimea. Originally buried in Paris, Mickiewicz's body now lies in Wawel Cathedral, Kraków.

His defining masterpiece, Pan Tadeusz, is a beautifully written epic portraying Polish society in the 19th century. To learn more about Mickiewicz you can visit the Adam Mickiewicz Museum of Literature on the Old Town Square.

Dominating Krakowskie Przedmieście, Mickiewicz's monument was first unveiled on the 100th anniversary of his birth in 1898. Sculpted by Cyprian Godebski and cast in Italy, the monument was ruthlessly destroyed by the Nazis after the Warsaw Uprising, however, after the war, Polish soldiers recovered Mickiewicz's head and other demolished parts in Hamburg, Germany. Sculptor Jan Szczepkowski was able to produce a copy of the original sculpture, which was unveiled, along with its restored surroundings, in 1950.

Rynek Starego Miasta 20
/warsaw/adam-mickiewicz-museum-of-literature_18414v
Widely regarded as Poland's greatest poet, Adam Mickiewicz is right up there with European heavies Byron and Goethe. A 'national bard' of not only Poland, but also Lithaunia and Belarus, he is responsible for inspiring Romanticism in Poland, and you c
see more

Church of the Assumption of the Virgin Mary and of St. Joseph

ul. Krakowskie Przedmieście 52/54
/warsaw/church-of-the-assumption-of-the-virgin-mary-and-of_120223v
Known more commonly as the Carmelite Church, this structure features a stunning neoclassical facade originally created in the 18th century. It features twin belfries and is most notable for being the site of
see more

The Royal Route in Warsaw feature
What Is A Plague Cross? feature
The November Uprising (1830-31) feature
see more