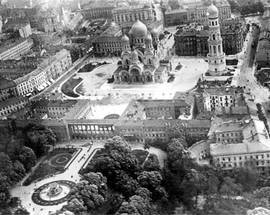 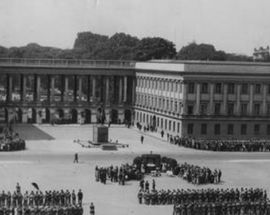 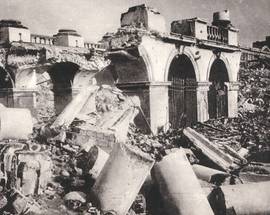 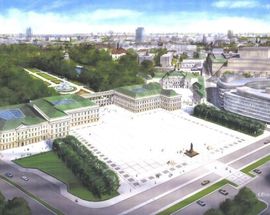 One piece of lost Warsaw that many hope will rise again is the Saski Palace, formerly located in the grounds of Saski Park. Originally the residence of the Morsztyn family the building was purchased by King Augustus II and substantially enlarged and used by both him and his successor, Augustus III. Off-topic, but nevertheless worth airing, amateur historians will delight in learning that Augustus II sired 12 children by different women, while his successor managed to match the number, only this time staying loyal to his wife in the process.

Back on track, when Augustus III passed away (shagged out most likely) the building fell into disuse before being rented out for accommodation. Between 1806-1816 the Prussians established Warsaw Lyceum on the premises, and conflicting evidence suggests that Chopin either lived there for a time, or that his father taught French in one of the outbuildings. Extensively remodelled in 1842, the Palace finally assumed its best known shape in 1925 when the Tomb of the Unknown Soldier was added to the series of colonnades used to link the two wings together. Serving as the seat of the Polish General Staff after WWI, it was here that the German Enigma Code was first cracked by local science boffins. WWII signalled the end of the Palace and it was flattened by retreating Nazi troops, with only the Tomb of the Unknown Soldier surviving the blasts.

But the story continues. In a rare act of foresight the city of Warsaw decided in 2006 to cover the cost of rebuilding Saski Palace. Budimex Dromex was awarded the tender to undertake the work and the façade - thanks to blueprints made available by the Central Military Archive - was planned to look just like it did in 1939. Completion was originally set for 2010, though building did not entirely go to plan. Although sappers failed to find any undetonated devices, builders came across over 10,000 rare archaeological finds including baroque sculptures, secret tunnels, ancient wells, German helmets and wine glasses bearing Augustus III’s monogram. No provision was made for discoveries of this scale, meaning that many of the treasures recovered corroded after being incorrectly stored. Due to the financial crisis of 2008, the rebuilding plans were put on hold. During the 100th anniversary of Poland's Independence on 11 November 2018, President Andrzej Duda symbolically announced that the palace will be rebuilt, to become a symbol of Poland's Independence and re-emergence onto the world stage. When we will see the final result is still to be decided, but the city hopes it will be ready by the 110th anniversary of Polish independence: 11.11.2028.