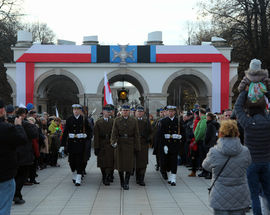 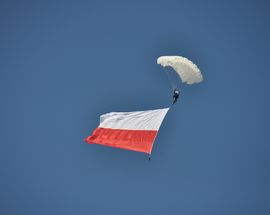 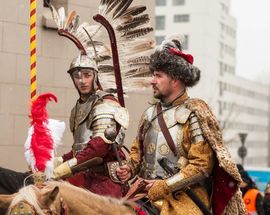 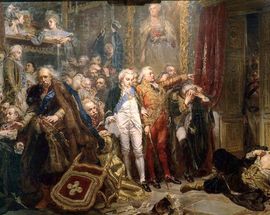 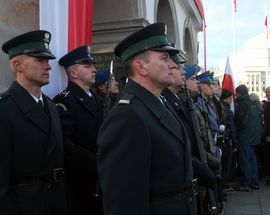 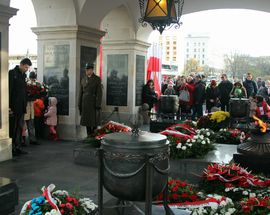 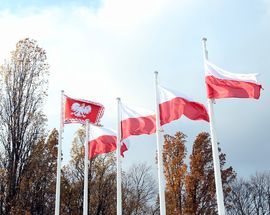 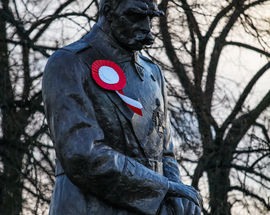 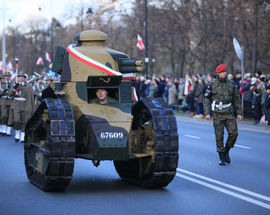 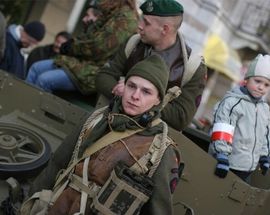 11 NOVEMBER 2018 marked a very important day in Poland's history. It was a time to commemorate not only the end of World War I, as is the case in western Europe on what is known as Armistice Day, but most importantly to Poles, their county's re-emergence on the map of the world, returning from an imposed status as a stateless nation - National Independence Day (Narodowe Święto Niepodległości). Prepare yourself for a turbulent read, for Poland's history, as you may already know, has certainly been topsy-turvy, bloody and violent!

It was way back in 1795, during the third partition of the Kingdom of Poland that the country effectively ceased to exist, split between three regional powers of the day: the Russian Empire, the Kingdom of Prussia and the Austrian Habsburg Monarchy. And so it was to remain until 1918.

But it was 23 years before that the first steps of the break-up of Poland began - a fraught process, ending the mini-empire of the Polish-Lithuanian Commonwealth (1569-1795), which prior to its dissolution consisted of an estimated 14 million people. It all officially started in 1772 with the 1st partition of Poland, but there were many factors leading up to this event. Poland had previously been weakened by external wars, invasions, civil war within the commonwealth, and as has been the case throughout its history, geography itself played a role against Poland as it lay in the middle of Europe, surrounded by expanding empires. Most notable was the Russian Empire, gaining strength following successful campaigns against the Ottomans in the Russo-Turkish War (1768-1774). The Habsburgs to the west were uneasy with the growing Russian threat and initially considered war, however, peaceful means were sought, with negotiations leading to the Polish-Lithuanian Commonwealth being carved up like a cake. Brutal for Poland, but from their points of view, effective.

Although military powers in western Europe were disinterested in the Commonwealth's pleas for help, there were notable individuals who sided with the Poles, one of the first being Swiss philosopher of the Enlightenment era, Jean Jacques Rousseau, who in the same year of partition offered some sincere advice:

'You may not prevent them from gobbling you up; see to it at least that they will not be able to digest you... if you see to it that no Pole can ever become a Russian, I guarantee that Russia will not subjugate Poland.'

Such an ethos would remain in the Polish psyche for the duration of Poland's gradual dissection – even after regaining independence, the nurturing of resistance, both intellectual and militaristic would remain a key feature of Polish struggles for freedom well into the 20th century.

Now, as history has shown, you cannot simply wipe away a collective consciousness, especially one of a kingdom which had existed for hundreds of years. What followed were inevitable wars and insurrections, all unsuccessful: The Polish-Russian War of 1792 began after attempts by the Polish Sejm (parliament) to reform their diminished state, adopting the Constitution of 3 May 1791 (the first in Europe and 2nd in the world), which was opposed by the Russian Empire and even some Polish nobility in the form of the Targowica Confederation, who wished to maintain their personal wealth and stature (gits, basically). The failed war led to the 2nd partition of Poland in 1793. Angered, the Poles began an insurrection with the Kościuszko Uprising of 1794, which ultimately failed, and resulted in the third and final partition of Poland. Ouch.

What would happen over the next 123 years, despite various forms of oppression and suppression (most notably in Russian-partitioned Poland, where a programme of 'Russification' prevented the use of the Polish language), was a formidable task, dangerous at times too, as the people of Poland passionately protected and nurtured the very concept of their cultural identity. Among themselves, within families, underground schooling, and the émigré groups, everyone learned to remain true to their national cause, and most importantly, be themselves. It was at this time the power of literature, poetry and music was employed by the likes of Fryderyk Chopin, Adam Mickiewicz and Henryk Sienkiewicz, to name a few, enthusing notions of a proud history through the power of Romanticism.

So powerful was the notion of regaining independence, each time there was opportunity, Poles joined causes en masse. Polish history is littered with failed military ventures and insurrections during the 123-year hiatus; the most notable ventures were the inclusion of Polish legions in the Napoleonic Wars (1803-1815), the November Uprising (1830-31) and the January Uprising (1863-64), all fought against the Russian Empire.

Finally, following the horrors of World War I (during which time Polish troops on all sides fought each other), on 11 November 1918, all the major powers controlling Poland were either severely weakened, or ceased to exist. Polish troops, legionnaires and young people in various organisations took advantage of this situation, mobilised and regained military and civil control of Poland in the days prior, and on 10 November 1918, Józef Piłsudski arrived in Warsaw - freshly released from German incarceration - where he was declared Commander-in-chief of the Polish forces. With the help of the then President of the Uniteds States, Woodrow Wilson, the country's position in the negotiations that lead to the Treaty of Versailles in 1919, the 13th of their 14 points stated the need for an independent Poland. It read:

'An independent Polish state should be erected which should include the territories inhabited by indisputably Polish populations, which should be assured a free and secure access to the sea, and whose political and economic independence and territorial integrity should be guaranteed by international covenant.'

And so it was to be, Poland regained its independence, but of course, this was not the end of the struggle, for there were now numerous territorial claims to deal with. The first of these conflicts - the Polish-Ukrainian War (1918-19) - actually started on 01 November, with the recently independent Ukrainian People's Republic over territories around current day Lviv (Polish: Lwów). The 2nd began at the end of 1918 with the Wielkopolska Uprising to control Poznań and the surrounding area. Both were successes. Territorial battles continued with Czechoslovakia, Lithuania, and a series of Silesian Uprisings, but Poland's very existence hung in the balance during the Russo-Polish War (1919-1920), the key point being the Battle of Warsaw (1920), also known as the 'Miracle on the Vistula' (Cud Nad Wisła) when Bolshevik Russia very nearly put an end to the reborn Polish state. Thanks in large part to a risky tactical flanking move by Józef Piłsudski and his cavalry, the invading Bolsheviks were routed and their plans to hook up with Bolsheviks in Germany failed.

Where from there? Well, we did say Poland's history certainly has been bloody! The interwar period was relatively calm, leading to a slow but steady growth, but sadly enough, National Independence Day, constituted in 1937 was only celebrated twice before World War II when Nazi Germany and the Soviet Union invaded Poland in September 1939. After the war, Poland would become a satellite state of the Soviet Union. In PRL (Polish People's Republic) times, Independence Day was moved to 22 July to honour the day the PKWN Manifesto (a document that basically asserted communist authority over Poland) was issued in 1944. In 1989 after communism fell, the holiday was restored to its original date.

To mark the occasion of Independence Day in Warsaw every year, in front of the Tomb of the Unknown Soldier on Pl. Piłsudskiego, there’s the official Changing of the Guard with all the big wigs, president, prime minister and top brass in attendance. Outside of the capital, cities all over the country hold their own parades as well. The official aspect of the day's proceedings tends to be quite celebratory with a slight sombre element, is well attended and passes without incident; however, in the last few years, there has unfortunately developed a trend for far-right groups to take advantage of the day's importance and gather for their own organised march through the city. This has come to a head on a number of occasions, leading to clashes with the police. Counter marches have also been organised in more recent years by centrist and left-wing groups - the police tend to try and keep them all apart as there is severe doubt as to whether they would all sit down together to have a nice cup of tea and a friendly chat...

Unfortunately, 2017's Independence Day celebrations in Warsaw made the international press for mostly all the wrong reasons with right-wing groups again marching with...umm...less than savoury banners! With the 100th anniversary being in 2018, the day's events were big! Fortunately, the day passed without major incident, with a lot of people on the streets from all political spectrums, celebrating, counter protesting each other, waving flags, setting off flares, and of course, most importantly, celebrating Poland's Independence Day!

Plac Piłsudskiego
/warsaw/plac-pilsudskiego_152011v
What is today Warsaw's largest square, used over the centuries for military parades and national celebrations, was a once a square in front of the now …
see more
Museums

pl. Marszałka Józefa Piłsudskiego
/warsaw/saski-palace_42033v
One piece of lost Warsaw that many hope will rise again is the Saski Palace, formerly located in the grounds of Saski Park. Originally the residence
see more
Monuments

Pl. Piłsudskiego
/warsaw/jozef-pilsudski-monument_18399v
Casting a steely gaze over the square named in his honour is a gloomy looking Field Marshal Piłsudski, a man many Poles hold responsible for winning the …
see more
Kraków's Mounds

Al. do Kopca (Wolski Forest)
/warsaw/Pilsudski-Mound_19975v
This massive man-made earthwork mound is the highest point in Wolski Forest, and probably the most rewarding destination i
see more
Monuments

Pl. Chrobrego
/warsaw/jozef-pilsudski-monument_32660v
The work of the Croatian sculptor Antun Augustinčić (1900-1979), most famously remembered for his Monument of Peace sculpture outside the UN headquarters in …
see more
Monuments

Al. Piłsudskiego, Gdynia
/warsaw/jozef-pilsudski-monument_127415v
A statue dedicated to the man who is widely recognised as having been the key figure in Poland regaining her independence after 123 years in 1918 and then …
see more
Monuments

ul. Garncarska 26
/warsaw/jozef-pilsudski-monument_148773v
You might notice a lot of Piłsudski in Kraków: between Piłsudski Street, Piłsudski Mound, the Piłsudski House and this Piłsudski monument you would be …
see more
Monuments

Pl. Piłsudskiego, Gdańsk
/warsaw/jozef-pilsudski-monument_40055v
Standing outside the city centre on the main road between Gdańsk and Sopot is this imposing statue of the inter-war leader of Poland, Marshall Józef Piłsudski. …
see more