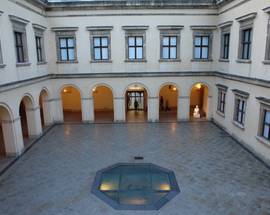 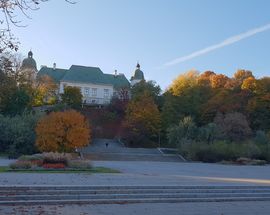 A castle of some description has been found on this site since the time of the Masovian Dukes (1300s), but the Ujazdowski Castle we see today was completed in a Baroque style in 1730 for Stanisław Herakliusz Lubomirski (it was his bathhouse that later became the Palace on the Island and gave Łazienki park its name). Ujazdowski survived two centuries before being gutted by fire during WWII, and was indeed lucky to escape total destruction: the retreating Nazis actually tried to blow it to pieces, as they did a number of Łazienki’s finest buildings. But - as is so often the case - what the Nazis couldn’t do the communists could, and though the original walls and foundations remained structurally sound in the 1950s Poland’s communist authorities decided to tear down the shell of the building and place a military theatre on the site. Common sense prevailed however, and the 1970s saw Ujazdowski rebuilt to its original plans. It today plays host to several large exhibition halls dedicated to showcasing rotating exhibitions of the very best contemporary art inside; find a wild mix of the good, the bad and the ugly, featuring the work of Poland’s leading contemporary artists here. Worthy and undoubtedly necessary, the gallery also houses a very good bookshop and reading room where you can freely peruse a huge collection of albums, magazines and books many of which are in English. There is also a fantastic cinema on site (U-jazdowski Kino) plus a top notch restaurant and café.

Admission 16/8zł to all exhibitions, for two exhibitions 12/6zł, for one exhibition 10/5zł, entrance to project room 5zł, students up to 26 years of age 1zł. Thu free.

ul. Agrykoli 1
featured
/warsaw/lazienki-park_77176v
The park and palace complex where half of Warsaw descends on a Sunday to take the traditional family stroll, the name Łazienki means baths and is derived from the park’s centrepiece and best-known attraction, the
see more
Featured

ul. Jazdów 2
featured
/warsaw/ujazdowski-castle-centre-for-contemporary-art_37644v
The Ujazdowski Castle Centre for Contemporary Art is a place for the creation and documentation of art in all its fo
see more
Featured

Ujazdowski Castle (Centrum Sztuki Współczesnej), ul. Jazdów 2
/warsaw/u-jazdowski-kino_17762v
Independent and alternative gallery and cinema. Very artsy, baby, and we wouldn't expect anything else, with U-Jazdowski Kino being located in the
see more

al. Ujazdowskie 6
/warsaw/ujazdowski-park_18435v
Not as grand as the nearby Łazienki Park, it's still a pleasant place to walk the dog and get up to other typical Sunday pastimes. There are plenty of benches to
see more

Very much enjoyed the museum but the service in the Qchnia Artystyczna was the worst we experienced over a three week visit to Poland.Our waiter was running around from table to table but typically carrying only 1 item while 3 other restaurant staff stood guard by the door platters in hand ready to clear tables that were slow to be served. We left without getting our food after 1.5 hours.
Take your guide with you Download a pdf