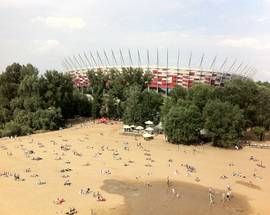 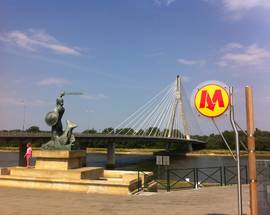 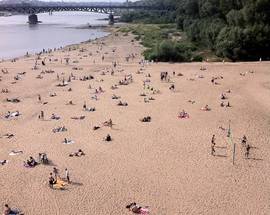 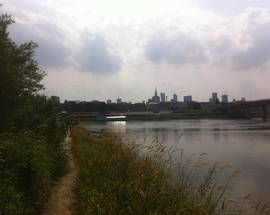 The secret's out that Warsaw is one of the most dynamic capital cities in all of Europe and it’s chock full of surprises. One of its best kept secrets is where half the city disappears to in the summer. No we’re not talking about the exodus of the vacationing masses nor the many families that head out of town to their summer cottages in the suburbs. From mid-May to early October, when the sun is shining and the weather is sweet Varsovians can be found beating the heat down by the river.

The Vistula or Wisła is Poland’s largest river and also one of the most unpredictable as well. The section that flows through Warsaw has carved a wide path through the capitol and left the modern metropolis with two ‘wildly’ different river banks. Over the last tumultuous century various Mayors have done their part to try and tame the left (West) bank with various land and boardwalk development projects, but the right (East) bank has been largely left alone to let mother nature take its course. The result is two totally different river banks each of which has a lot to offer locals and tourists alike in terms of rest, relaxation, exercise and entertainment. Let us take a walk through some of the highlights of the left bank first heading North to South.

Left (West) Bank of the Vistula

At the foot of the Royal Castle just North of the Śląsko-Dąbrowksi Bridge in the gardens just opposite the river bank you can catch a stunning Multimedia Fountain show every Friday and Saturday at 21:00 (21:30 from September). This is a great place to start or end an evening stroll along the river. Head South along the boardwalk and you’ll run right into Copernicus Science Center. While this groundbreaking and magnificent museum is worth spending a whole day exploring on it’s own, they also organize an outdoor Summer film series (Fridays at 21:00) as well as outdoor workshops and games for kids. This is also the main gateway to the river as the newly opened Metro stop next to the museum allows Varsovians to take the Metro right to the very edge of the river bank.

Continuing South and past the picturesque Świętokrzyska Bridge (selfies welcomed), you’re immediately confronted by the two-pronged attack of Barka and Plac Zabaw Nad Wisłą. By day and night these two cultural institutions make up perhaps the biggest overall adult playground, nightclub and floating bar complex on this side of the river, stretching from the edge of the grassy knoll on the riverbank down over the broad concrete steps, which serve as both an amphitheatre/dancefloor for concerts on Barka and a free-for-all urban picnic area, and onto the barge itself. Head a bit further south and pass several other boats and barges until you come to two barges that host a floating hostel and motel respectively. Perched above them on the riverbank is a food truck food court which features a rotating cast of rolling sandwich slingers. Whether you’re hungry or not we suggest queuing up for a burrito from Gringo’s, you won’t regret it.

Now pass under the Poniatowski Bridge and past the riverfront condos to the fastest growing area of the whole river. In the last few years, dozens of bars, barges, clubs and beach front complexes have popped up including Sen Pszczoły, Kurort, Sezon, Pomost 511 and Nurek. All are worth checking out any time of day.

Right (East) Bank of the Vistula

When it comes to exploring the wild right bank on the East side of the river, we strongly recommend heading there in the daylight hours. The best point of entry is to cross the Poniatowski Bridge by foot, bike, tram or bus. Once you get to the National Stadium, B-line it for the sand. You’ll first be greeted by the Plażowa beach bar complex which is the gateway to the largest urban Beach in Poland if not Europe. You can lounge here or continue a bit further on to the shipping container and street food mecca. Both places are great bases for a day of sun and fun. As you continue towards the river the vast expanse of beach opens up in front of you and on a warm day it is filled with Beach volleyballers, frisbee throwers, sun tanning beauty queens and every manor of beach bum and hipster one could possibly imagine. This side of the river also offers stunning views of downtown Warsaw. Lounging on a beach towel, sipping a cold drink in the middle of a huge city is a sublimely surreal experience that we highly recommend.

If the sun gets too strong, or you want to get back to the center you can always catch a free water tram across the Vistula. For the more ambitious and active among you we recommend heading North and exploring a bit of the wild and untamed right bank (the South is even wilder!). There are bike and walking trails not to mention all sorts of minor peninsulas and jetties to explore. If you happen to have a fishing pole with you then there are lots of great spots to drop a line. Continue past the Świętokrzyska Bridge as the paths wind around and back up to the main road where you briefly have to cross a small bridge before getting back off the beaten track. Continue following the forest walk and make sure to look out for all sorts of birds and other critters making their home on the riverbank. Head under the Śląsko-Dąbrowksi Bridge and continue winding your way North until you hear salsa music and see the bright specks of sand that mean you’ve reached La Playa, the northernmost beach club, nightclub and sports complex on the river. This is the perfect spot to enjoy a cocktail and watch the sun set over the city.

Skwer im. Tadeusza Kahla
/warsaw/barka_116476v
​Brainwave for the heatwave from the alternative guys responsible for the Plac Zbawiciela mayhem of Plan B. Barka is basically a fla
see more
Seasonal Bars & Clubs

Wał Miedzeszyński 407
/warsaw/wal-miedzeszynski-407_167921v
Some may call this pool complex 'Spartan', and it is, but it's an old classic in Warsaw found right next to the Vistula River in the Saską Kępa area
see more
Clubs

/warsaw/po-wisle_143652v
This brand new Vistula river boat tour company has daily cruises on offer (dependent on weather). Each cruise lasts around 1 hour and departs from a dock on …
see more