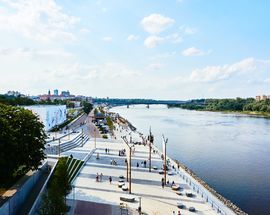 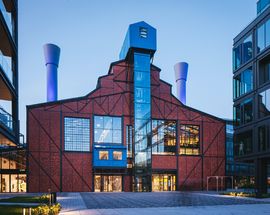 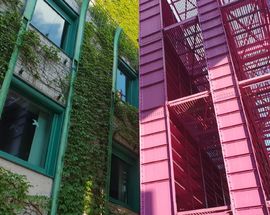 It might seem like quite a stretch to refer to any part of Warsaw as a hot spot, but the city's riverside Powiśle district has been blipping on the radar for quite some time, however, in more recent years it's gone through quite a rapid transformation which hasn't gone unnoticed by eager travel writers searching for the next best urban gem! The Powiśle of today is a far cry from what it once was - a fairly mundane area nestled between the Royal Route and the Vistula River, full of apartment blocks, factories/warehouses and workshops (often dilapidated), avoided by locals as there was simply nothing interesting to see or do here that warranted rolling down the hill to explore. Fast-forward to today and this is one of the most intriguing parts of Warsaw, containing some fantastic museums, the modernised riverside boulevards, a revamped power station (we'll get to that later), photo-friendly uni gardens, an iconic train station bar (what?) unique shops, and of course, a gastro and social scene hotbed!


A Quick Recent History of Powiśle

It's time for an explanation for this mish-mash through a brief history lesson (don't yawn, it's worth it!). Warsaw University got the ball rolling by relocating its library to its current location on ul. Dobra 56/66 in 1999 and subsequently adding the now popular gardens (including rooftop garden with viewing platform) in 2002. The intelligentsia had officially moved in. But Powiśle was still seen as an area of little interest, the most interesting point being the left-bank riverside boulevards, which were merely cracked concrete slabs covered in weeds, the remnants of a pre-war effort to build a promenade, and subsequently became a favourite haunt of local drunks. Oh, dear. But once city centre rents began sky rocketing, the vanquished found their new home here. Local artists, small cafe and restaurant owners, shop owners, even activists, looking for a near-the-centre area to relocate saw the potential in the leafy riverside district.

And so things plodded along for a while, the blips on the radar getting louder with some outstanding gastro venues and nightlife spots popping up; one of the most iconic bars in Warsaw opened here in 2009, the former ticket office of the still functioning train station Warszawa Powiśle - the distinctive modernist shape and its more than Spartan approach to drink/food struck a chord with locals and its popularity continues to this day. And then exciting new plans to build the Copernicus Science Center were announced, resulting in an official opening in 2010. This was followed by the opening of the new east-west M2 Metro line in 2015, which plonked a stop in the heart of the district next to the museum - Centrum Nauki Kopernik! All good and done, but arguably the biggest boost to the area's accessibility was the project to revamp the Vistulan Boulevards - the 1st section nearest the Old Town was completed in 2015, with the Powiśle section opened in 2017. It was at this same time the Museum of Modern Art on the Vistula moved in to its new location on the river! Now the area was no longer a little known place to stumble into, but a unique destination in its own right, easily accessible by metro, full of world class museums, and leisurely opportunities on the boulevards for walkers, cyclists, runners and families with kids. What more could be needed? A power station. Yup.

The district had enough energy to power its popularity, but with all up-and-coming districts, there is always the threat of gentrification, and plans were set in motion to revamp the former power station Elektrownia Powiśle. The 100+ year old building functioned right up until its closure in 2001, lying in a sorry state until it was bought up by investor Tristan Capital Partners with a plan to turn it into a multifunctional centre with shops, gastro points and event space, to name a few. The big opening occurred in May 2020 and is settling in nicely into the district's unique atmosphere. Whereas the alternative Praga district across the river is also slowly being gentrified, there are enough local shops and initiatives in both districts to maintain a truly local vibe, despite being coupled next to luxury apartments and investments. The hope is the cultural venues, the public spaces and unique gastro and nightlife venues will hopefully continue to provide an organic atmosphere to the area.


What to See & Do in Powiśle

It's easy to walk around Warsaw, and although visitors to the city often stick to the Royal Route, going from the Old Town to Łazienki Park, it's quite easy to walk down from the Old Town through the overlooked Mariensztat estate (the beginning of the Powiśle district) and down to the Boulevards, walking south towards the heart of Powiśle and taking in the Warsaw University Library & Gardens, the Museum of Modern Art on the Vistula, the Copernicus Science Centre and Elektrownia Powiśle all on the way! You can choose to continue to walk to Łazienki and see the 2nd most famous Syrenka (mermaid) statue in Warsaw or simply use public transport (metro or bus) to get back to the more familiar climes of the Royal Route and city centre - alternatively, you can walk up ul. Tamka to get to the Fryderyk Chopin Museum before getting back to the Royal Route. Along the way you can even spot some street art murals and scars on buildings from the Warsaw Uprising.

Where to Eat & Drink in Powiśle

Now this is where your taste buds will get excited. There are tonnes of venues to choose from on and around ul. Solec, one of the main streets in the area. Some of our favourites include The Cool Cat with its international menu, LAS dealing with a modern take on Polish cuisine, cafes such as Kawiarnia Kafka, to bars with a wide range of craft beer options like Kufle i Kapsle and the rooftop restaurant/bar SEN with its awesome panoramic views of the river. Of course, there is also the iconic dive bar Warszawa Powiśle. Sticking to the river, there are numerous barges moored up to the boulevards, and street food trucks make an appearance near the ever popular Plac Zabaw (actually a bar/restaurant translated as 'Play Park'). Elektrownia Powiśle has  a unique 'food hall' lower level, resembling street food stalls, but also stand alone restaurants and bars. You'll love them all.

Places Worth Discovering in Powiśle

Bulwar Bohdana Grzymały-Siedleckiego (near Most Świętokrzyski)
/warsaw/syrenka-powisle-warsaw-mermaid_149093v
Possibly the second most famous statue of the city's symbol. This 2.75m tall bronze monument was created by sculptor Ludwika Nitschowa and unveiled on June 29, …
see more
Outdoor Attractions

ul. Dobra 42
/warsaw/elektrownia-powisle_168077v
When plans for the new Elektrownia Powiśle all-in-one complex were announced in 2017, we were slightly cynical that this wouldn't be another copy+paste effort. …
see more
Museums

ul. Wybrzeże Kościuszkowskie 20
featured
/warsaw/copernicus-science-centre_72408v
A rare example of European Union funding being used in a genuinely visionary way, the CSC is many things, including the very best science centre in Europe, one …
see more
Featured
Museums

ul. Wybrzeże Kościuszkowskie 22
EDITOR'S PICK
/warsaw/museum-on-the-vistula_151325v
The Museum on the Vistula is a branch of the Warsaw Museum of Modern Art, and the current site of all the institution's exhibitions while their new …
see more
Editor's pick
Outdoor Attractions

ul. Wybrzeże Kościuszkowskie 20
EDITOR'S PICK
/warsaw/planetarium-of-the-copernicus-science-centre_87059v
A trip to outer space is made simple at the Planetarium of the Copernicus Science Centre, which is tucked behind the giant Copernicu
see more
Editor's pick
Places of Interest

ul. Mariensztat
/warsaw/mariensztat_168076v
Cut off from the rest of the Old Town by the intersecting Trasa W-Z, the Mariensztat area - the northern-most part of Powiśle, has its orig
see more
Clubs

ul. Solec 44
/warsaw/las_158149v
Walk off the street and into what feels like the side kitchen to the secret garden, with its swing, outside seating, leafy surroundings, ahhh, it's nice... …
see more
Bars & Pubs

ul. Kruczkowskiego 3B
/warsaw/warszawa-powisle_55774v
Set in a former ticket hall this PRL-era concrete rotunda is a bit of a gathering ground for those enjoying post-
see more
Asian

ul. Oboźna 3
/warsaw/Kawiarnia-Kafka_81011v
This popular standout café is a favorite of students with good reason. Outside are scattered beach chairs that are often packed with lazing twentysomethings, …
see more
Bars & Pubs

Skwer im. Tadeusza Kahla
/warsaw/barka_116476v
​Brainwave for the heatwave from the alternative guys responsible for the Plac Zbawiciela mayhem of Plan B. Barka is basically a flat-topped barge, pimped up …
see more
Bars & Pubs