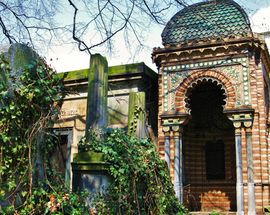 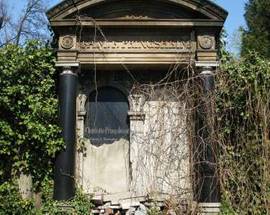 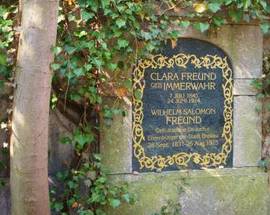 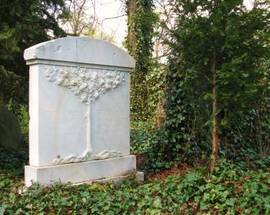 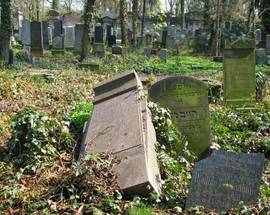 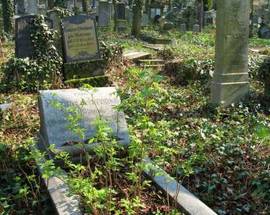 Established in 1856, this 4.6 hectare cemetery is perhaps the most well-preserved testament to the former strength of Breslau’s pre-war Jewish community, with over 1200 gravestones. Closed in 1942, the cemetery quickly fell into deep neglect: in 1945 it was turned into a fortress by the Nazis and saw fierce fighting as evidenced by the eerie bullet holes in many of the gravestones. Preservation began in the 1970s and in 1991 it was opened as the Museum of Jewish Cemetery Art in tribute to the craftsmanship of its sepulchral art. Indeed the beauty and diversity of styles and symbols on display is perhaps unmatched anywhere. Many noteworthy figures are buried here, including the renowned biologist Ferdinand Cohn, the historian Heinrich Graetz (author of the first complete history of the Jews), Clara Immerwahl (first female PhD student at the University of Breslau, and wife of Fritz Haber, who committed suicide in objection to her husband’s work developing chemical warfare), Ferdinand Lassalle (founder and leader of the first labour party in Germany, killed in a duel), and the parents of Edith Stein; using old records some of their tombstones are slowly being restored. However, despite these modest efforts the Ślężna Street Cemetery remains a completely mysterious and evocative sanctuary of decaying vine-covered monuments, the broken pieces of which are stacked against each other, giving shelter to stray cats and shade to wildflowers. Well worth a visit, a highly informative accompanying booklet (in Polish, English or German) makes it even more so, despite being overpriced at 15zł.

09.08.2017
Prof. Michael Leschziner
London, UK
I cannot understand why it is so hard to get a response from the management of this cemetry, merely to cross-check a name of an ancestor buried in Cozel against records held by the authorities. Frustrating!
22.06.2017
Dr Ruth ravid
wrozlaw
my family want to visit the cemetery on 28.7.2017 please tell me what do I have to do to arrange the visit/ thanks in dvance,ruth
15.05.2014
Editor IYP
Wroc&#322;aw
It&#39;s not that the site itself is over&#045;priced, but the only information (aside from in IYP) comes in the form of a brochure that you have to pay an additional 15z&#322; (on top of the 10z&#322; admission fee) to read. At one time this brochure was free, you just had to return it when you left, but that&#39;s no longer the case. The cemetery is absolutely worth visiting; is the brochure worth 15z&#322;? For the average tourist, no, not really. For those who have come here to do research or trace their roots, sure.
15.05.2014
carolyn
US
I don&#39;t think the visit to the Jewish cemetery is overpriced. It needs a lot of work to be maintained, cleaned and improved. $5 isn&#39;t too much to ask to preserve a special part of history. Not many Jewish cemeteries survived WWII.
Take your guide with you Download a pdf