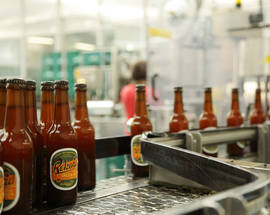 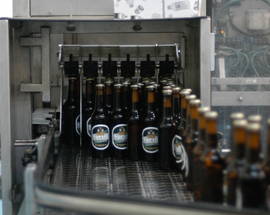 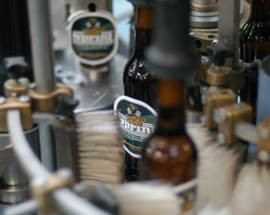 When you think beer, you probably don’t immediately think Switzerland. And indeed we do not produce one of the big-brand beers nor are we the world’s top beer drinkers: with an average consumption of 57 litres per citizen and year, we are far behind Europe’s top nations like the Czech Republic (160 litres), Germany (114 litres) or the United Kingdom (101 litres). But that doesn’t mean Swiss breweries don’t brew some fine beers. The most common beer here is lager, with a taste that is in general a bit milder than you may be used to. Most brands feature a so-called special brew (spezli), usually brewed with extra hops which gives it a bitterer taste. You can also get unfiltered and cold-filtered Swiss beers and wheat beer is usually on the menu too, but often imported from Germany.

Globalization has put many mid-scale breweries out of business in the last decade or so. Many of them are now owned by Europe’s biggest players on the beer market Carlsberg and Heineken. Many brands still exist, but are brewed centrally and no longer in their cities of origin. Zurich’s traditional brewery for example, Hürlimann, merged with the biggest Swiss brewery Feldschlösschen in 1996 and stopped brewing beer in Zurich, before both were taken over by giant Carlsberg. These mergers gave rise to a new phenomenon on the beer market: local brewers unhappy with their beer being brewed outside their city started to brew their own beer, so that today we have a handful of small but successful breweries in Zurich. In many of Zurich’s restaurants you’ll still be served the solid lagers Feldschlösschen or Hürlimann on tap - but we recommend giving the new Zurich beers a try as well. You find them in an increasing numbers of venues, be it bottled or on tap:

Established after the closing of the Hürlimann brewery, Turbinenbräu quickly became the biggest brewery in the city. Try their Sprint, full-bodied and very drinkable special beer with a bitter note. Start is their wheat beer, while Rekord is a special brew with a touch more malt.

Brewed by Ralf Paul, master brewer from Zurich, this beer clearly has Zurich roots, though technically it’s brewed outside the city (actually in the countryside of neighbouring canton Aargau which Zürcher love to hate). The beer Paul 01 is a classy, tangy special beer, a bit bitterer than a Lager, but definitely for everyday use. Paul 02 is dark, unfiltered and malty. They have different specialities according to the season.

Amboss comes in four different tastes: Blonde (lager), Spez (bitter), Weizen (wheat) and Amber (mild and sweet). Established in 1991, Amboss has a large and ever-growing fan group. Even though at least part of it is now produced in the canton of Zug, this is a fine regional beer.

Universitätstrasse 23
EDITOR'S PICK
/zurich/the-alehouse_151901v
With up to 21 different craft beers on draught and on the hand pump, Alehouse is one of the best-stocked bars of its genre in town. You're guaranteed to find a …
see more
Editor's pick
Craft Beer Bars

Heinrichstrasse 267
/zurich/steinfels_163545v
This microbrewery received a complete make-over in 2019 and its brick and stone walls, rustic wooden tables and unique lamps dangling from long cables over …
see more
Casual bars

Heinrichstrasse 267
/zurich/Steinfels_112286v
We could also list the Steinfels in the restaurant section, but as we particularly like the Steinfels beers, we recommend it for a pint or two. They brew their …
see more
Craft Beer Bars

Grüngasse 7
/zurich/bierlab_158767v
Zurich's Bear'n'Stein craft brewery has made this snug bar in a former district tavern its new home. They decided not to sell their beer in bottles, but rather …
see more
Craft Beer Bars

Luisenstrasse 7
/zurich/the-international_134366v
This bar is dedicated to craft beers from small breweries. They have a great choice of around 50 different ones from all around Switzerland on offer, and …
see more
Craft Beer Bars

Limmatstrasse 109
/zurich/eldorado_112285v
This eldorado is one for beer experts. At this cool joint they have 101 different beers on offer, many of them craft beers from small breweries from …
see more