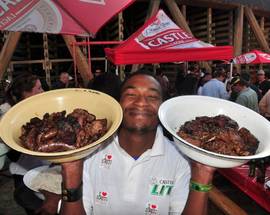 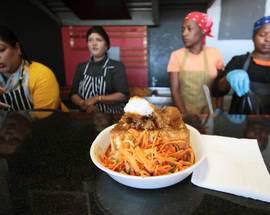 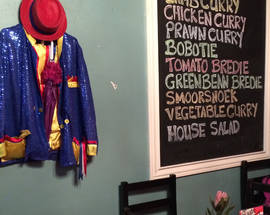 Forget your food allergies, aversions and intolerance and open your palate to the tastes of South Africa. We called in food expert Anna Trapido to make sure you know your koeksister from your walkie talkies.

A
​Amadombolo Zulu-style steamed dumpling breads served as an accompaniment to stews.
Amagwinya Known as vetkoek in Afrikaans, these fried dough balls are similar in size and shape to a doughnut. Often sold by street hawkers and roadside vendors.
Amasi isiXhosa and isiZulu term for the soured milk commonly used as a drink or accompaniment to maize porridge. See also ingqaka.
Biltong Coriander-marinated dried meat, Afrikaans in origin but consumed widely by all South Africans.

D
​Denningvleis Cape Malay-style lamb, tamarind, onion and clove mélange. ‘Denning’ is the Javanese word for ‘buffalo’.
Droëwors Literally ‘dry sausage’ in Afrikaans. A snack food, based on the traditional boerewors but usually made in a thinner casing.

G
Gatsby Cape Town-style sandwich made from bread stuffed with any combination of meat, melted cheese, fried eggs, chips and pickled chillies. The name is thought to refer to the flat cap worn by Robert Redford in the film of F. Scott Fitzgerald’s book, The Great Gatsby.

I
Ingqaka Xhosa-style amasi curds with the whey drained off. Similar to ricotta in taste and texture.
Ingelegde vis Afrikaans term for Cape-style pickled fish (marinated in onion, turmeric, masala and allspice).
Inhloko isiZulu term for a slow-braised cow’s head. Not to be confused with a smiley.

P
Pap Refers to maize porridge of various sorts.
Potchestroom Soweto term for flat, biscuit-like baked treats served at large gatherings, especially funerals. So called because the Chris Hani Baragwanath Hospital is on the Old Potch Road in Soweto, and it is believed that those who enter the hospital leave ready for their funeral biscuits
Piri-piri Mozambican and Angolan olive oil, garlic and chilli marinade. Peri-peri is South African emulsified chilli sauce.
Potjiekos Afrikaans term for stews made in a cast iron, three-legged pot (known as a ‘potjie’) over an open fire.

Anna Trapido is the author of ‘Hunger For Freedom, The Story of Food in the Life of Nelson Mandela’, and ‘To the Banqueting House: African Cuisine, An Epic Journey’. She is also the former editor of ‘Rossouw’s by Diners Club South African Restaurant Guide 2015’.