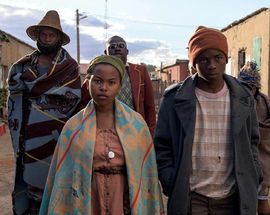 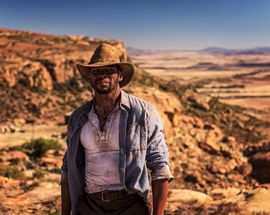 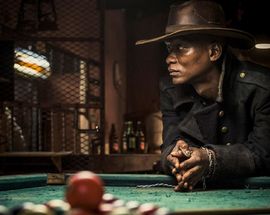 Five Fingers For Marseilles has all the classic hallmarks of a Western - revenge, cowboys, dastardly sheriffs and outlaws - but is set in a distinctly South African landscape.

In the fictional remote town of Marseilles, the apartheid police rule over the township of Railway with impunity and terror. To defend themselves, a group of five teenage self-styled outlaws (the Five Fingers) rise up to challenge the police brutality. When Tau, one of their members, kills two policemen he flees the community leaving his friends to bear the brunt of the consequences.

Long after the end of apartheid, the embittered 'Lion of Marseilles' who has been in and out of prison leading a life of crime since his self-imposed exile from Railway, finally returns to his hometown seeking a peaceful retirement. There he finds his old comrades have now become prominent community members, but a sinister band of evil gangsters is terrorising the township, threatening the community's safety and happiness. Facing deadly threats against himself and his childhood love Lerato, Tau once again takes up arms for a final showdown with the Five Fingers against old allies and new enemies.

How to cook a French tarte tatin by Chef Garth Bedford and Institut Français SA Lockdown in Joburg
Halaal Joburg – our pick of the best halal restaurants and cafes feature
Ask a Local: #MyJoburg by Geraldine Fenn and Eric Loubser  Ask a Local: #MyJoburg
see more
Put our app in your pocket