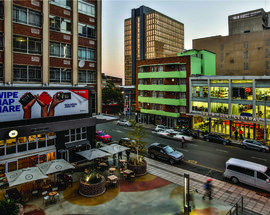 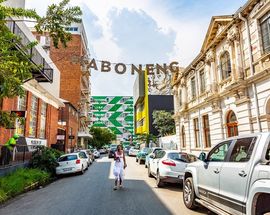 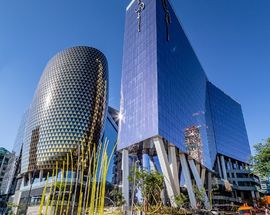 Johannesburg (more popularly known as Joburg) is a city where extreme wealth and dire poverty live side by side in many neighbourhoods. The affluent northern suburb of Sandton and its neighbour, the township of Alexandra, remind visitors of how apartheid once shaped the city, and how that legacy still persists. However, Johannesburg today is a more integrated city than it has ever been since its birth. There are visible signs of an emerging black middle class and a shift away from the simple equation of white privilege and black disempowerment. Still, if this process of a city returning to normal after years of oppression and division is compared to a race, we are in the starting blocks rather than at the finish.


More than twenty years after embracing democracy, the city is still trying to define what its future might look like. But there are many bright spots on the map already, among them the big residential developments that are breathing life into the once failing central business district. New neighbourhoods have sprung up in formerly deserted districts, and there is always something new and shiny to look at, be it a new must-visit restaurant, venue, gallery or shop.

The districts highlighted here each have a distinctive feel and something unique to offer the visitor.

ALEXANDRA
Apartheid’s legacy bequeathed the township of Alexandra to its wealthy sister, Sandton, and the two couldn't be more contrasting. Alex, as it is known, may be a historical anomaly but it’s also home to thousands of people and expresses the city’s diversity and income gap in a few square kilometres. Here you’ll find informal shacks precipitously clinging to the Jukskei River banks, housing entire families in a single room, adjacent to the modest East Bank suburban housing developments. Culturally in the shadow of Soweto, Alex is starting to wake up to its potential as a tourist destination. To visit the area it is best to arrange a tour with an experienced guide.

BRAAMFONTEIN
Bordering the city centre and joined to Newtown by the Nelson Mandela Bridge – Johannesburg’s landmark equivalent of Cape Town’s Table Mountain – Braamfontein is fast becoming the hipster capital. An area that caters to students and is home to the world-renowned University of the Witwatersrand, or Wits, ‘Braam’ is home to museums, theatres, the Neighbourgoods Saturday market, restaurants, coffee shops, galleries, quirky design stores and the city's most energetic nightlife.

BRYANSTON AND FOURWAYS
The northern stretches of the city host security suburbs, outdoor-lifestyle centres, plant nurseries and equestrian and golfing estates. Here suburban life is punctuated by malls that replicate each other and by Montecasino, a major casino and theatre complex that is a popular nightlife destination. It is home to three hotels, a multitude of restaurants, an exceptional bird park, Montecasino Bird Garden, and two of the city's best theatres; Teatro and Pieter Toerien Theatre.

CHINATOWN
The original Chinatown along Commissioner Street still hosts a slap-up Chinese New Year celebration and has a handful of restaurants as well as the Sui Hing Hong Supermarket, a must-see store that sells everything from frozen dim sum to sex toys. Its considerably bigger and brasher rival is New Chinatown on Derrick Avenue in Cyrildene, a suburb east of the city centre. With a massive new gateway announcing the district, Cyrildene’s Chinatown feels a lot more like visiting an exotic international travel destination, with very little English spoken, an incredible array of vegetables sold on the street, supermarkets, tech stores and restaurants.

CITY CENTRE
The City Centre – or simply 'town' as many locals call it – is the victim of a poor reputation but holds many amazing Joburg secrets. After years of dire neglect the area is certainly on the up again. While its residential life has grown immensely over the past few years, most of the city centre's offerings are best enjoyed in daylight. These include the quirky Fashion Kapitol in Joburg's historic garment district; the pedestrianised Main Street, soaked in mining history; the 50-storey Carlton Centre, a skyscraper with a panoramic view; the Ethiopian district known as Little Addis; traditional medicine markets; the grand Rand Club and neighbouring restored heritage buildings like Cornerhouse. The City Centre also has a rich collection of public art. One of the best ways to explore the City Centre is on a walking tour, see Tours for our recommendations.

FORDSBURG
Historic Fordsburg, on the western fringe of the City Centre, is the heart of Joburg's Indian and Pakistani communities, with vibrant city streets, a weekend night market, spice shops, traditional sweetmeat stores and Middle Eastern grill restaurants. Its shopping hub is the Oriental Plaza, which has 360 stores that stock everything from jewellery to household goods, fabrics to haberdashery, contemporary and traditional fashion to the best takeaway samoosas at World of Samoosas and great curries from the Golden Peacock. With plenty of halal restaurants and takeout places, it’s an area that is busy day and night, especially Friday and Saturday evenings.

HYDE PARK
Hyde Park is one of the most expensive suburbs in Johannesburg, and has some exceptionally high walls surrounding its residential properties. Much of the area’s activity is located in Hyde Park Corner, the swankiest shopping centre filled with international designer stores, ladies who lunch, and the rest of the cappuccino-sipping, Porsche Cayenne four-wheel-drive-owning, groomed and manicured Joburg set. Practice not gasping at R15 000 price tags for a dress and you’ll fit in just fine.

MABONENG
The work of a single property-development company, this inner-city district (also known as City and Suburban) has been converted from industrial warehouses and factories to a happening lifestyle playground. Street art is a big feature here, along with an eclectic selection of restaurants and stores. The pioneerING development is Arts on Main, where one of South Africa's most famous contemporary artists, William Kentridge, has his studios. Maboneng is also has lots of lively restaurants, coffee shops and bars and one of Joburg's best backpackers hostels Curiocity Backpackers. The list just keeps on growing. Maboneng is a Sotho word meaning 'place of light'.

MELVILLE AND AUCKLAND PARK
The areas adjacent to Braamfontein are the city’s student capital. Auckland Park is home to the University of Johannesburg campus and the small adjoining suburb of Milpark hosts 44 Stanley, a great lifestyle hub filled with local designer stores and restaurants. Melville is a celebrated nightspot that is steadily shaking off its reputation for slightly grungy people and venues with an eclectic mix of dive bars and sophisticated cocktail bars and fancy bistros.

THE PARKS AND GREENSIDE
Often referred to as the ‘leafy suburbs’, the Parks include the wealthy suburbs of Parkview, Parkwood, Parktown North, Craighall Park, Greenside and Parkhurst. Throw in the Johannesburg Zoo, Zoo Lake and the nearby Emmarentia Dam and you have some of the city’s major outdoor attractions amid pretty, well-manicured tree-lined suburban streets. Parkview and Parkhurst have their own high streets: Parkview’s has the ambience of a modest village, while in Parkhurst you are likely to spot a Ferrari or two parked outside one of the many popular restaurants on the 4th Avenue strip. Life in Parktown North is dominated by eateries and a grocery story, while Parkwood has many of the city’s finest art galleries collected in two or three blocks along Jan Smuts Avenue as well as a cool collection of restaurants and bars clustered around the corner of Bolton Road. Greenside is a leafy old suburb with a lovely strip of quirky restaurants and bars stretched out along Gleneagles Road.

ROSEBANK, ILLOVO AND MELROSE
Rosebank is a business and shopping district along Oxford Road, halfway between the City Centre and Sandton. It houses a series of malls that have all been integrated into a vast retail space, criss-crossed by pedestrianised streets and walkways. With hundreds of shops to choose from, as well as restaurants, cinemas and an African craft market, it is a popular destination for visitors and locals alike. Neighbouring Rosebank, Illovo is a small restaurant district also well known as the home of Joburg's main cricket ground, The Wanderers. Nearby Melrose Arch, off Corlett Drive, is favoured for its sanitised street life and designer-label shopping.

SANDTON
Just a few decades ago this area was nothing but vast tracts of farmland. Nowadays Sandton is Joburg’s (and Africa's) richest business district housing the headquarters of many of the country’s top companies, the Sandton Convention Centre and the Johannesburg Stock Exchange. Sandton is easily accessed by the Gautrain as well as public and private transport. It is without doubt the shopping capital of the African continent, with Sandton City and Nelson Mandela Square its crown jewels. The area is also home to many of the city’s big-name international hotels.

SOWETO
South Africa’s most famous township was once home to two Nobel Peace Prize winners, Nelson Mandela and Desmond Tutu, and is steeped in history. But it’s not only history that makes this vast neighbourhood tick. With many renovation projects now completed and an upgraded transport network linking it to the city centre, Soweto is constructing a contemporary identity with the help of a new generation of entrepreneurs who want to offer the world everything – from anti-apartheid landmarks like Vilakazi Street and the Hector Pieterson Museum to bungee-jumping and bird-watching – in this very famous part of the city.