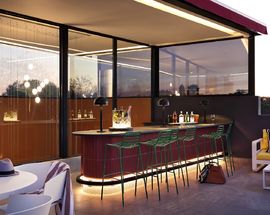 In our monthly hotel blog we take a look at the latest Joburg hotel trends, new venues and enticing specials that you don't want to miss. Catch up on February hotel news round-up here and our March hotel news here.

Work on the new Radisson RED Rosebank hotel in the Oxford Parks precinct is well underway and this cool new addition to the Rosebank landscape is preparing to open to the public in June, 2021. We recently took a behind-the-scenes tour of the new hotel and can confirm it looks fantastic - the much-anticipated 7th floor rooftop bar is going to knock your socks off.

Reflecting the Radisson RED brand's focus on youthful creativity the hotel put out a 'casting call' in March to recruit new staff for the hotel, with applicants being asked to submit a creative one-minute video about themselves. From more than 1,000 entries, a shortlist of final applicants were invited to a fun casting day, complete with food trucks and other activations, where the final 40 new staff members will be chosen.

High Tea is returning to the Saxon Hotel, Villas & Spa

The luxurious Saxon Hotel in Sandhurst reopens its doors on May 1, 2021. High Tea fans will be delighted to know that the hotel will be bringing back its High Tea offering, with High Tea available daily in the hotel's Piano Lounge. The High Tea costs R550 per person and must be booked in advance. You can make reservations online here.

Recognising the continuing prominence of hybrid digital conferencing, Protea Hotel Balalaika in Sandton Central has developed its own high-tech live streaming studio designed especially for professional digital conferencing and other live-streamed events such as awards ceremonies. Not dissimilar to your average TV set, the studio has a stage with multiple large screens for hosts to view teleprompters and Zoom rooms as well as green screen backdrops, and a full set of HD cameras and other audio-visual equipment for ensuring the highest quality streaming. The studio can be combined with the use of the hotel's other conferencing facilities allowing for truly hybrid conferencing. Find out more about hiring the venue here.

In addition to launching its new live streaming studio, the whole Balalaika property has also recently had a major  makeover with newly refurbished rooms, a fresh new look for the hotel's The Conservatory dining venue, and a new coffee bar, Coffee on Twenty, specialising in latte art.

Closed since the March 2020 lockdown, the landmark Hyatt Regency hotel in Rosebank has announced that it will only reopen to the public in 2022. According to the Hyatt Regency website the hotel will only be accepting bookings for the hotel, spa, restaurant and bar from April 2022, with some estimates indicating that the hotel may only finally reopen as late as September 2022.

35% off your next getaway at Home Suite Hotels

Home Suite Hotels is embracing the weekend staycation with special couples weekend rates and 35% off rooms for two. Treat yourself to a getaway at their Rosebank hotel at the corner of Bristol and Oxford Roads from R1,620 a night for two (including breakfast) and spend your weekend enjoying the view from their rooftop pool deck with its awesome view of the Joburg skyline. The Home Suite group also recently launched a new hotel in the trendy De Waterkant neighbourhood in Cape Town, suites start at R1,400 per night per couple.
Book online via homesuitehotels.com to get these special reduced rates.


Subscribe to our free weekly newsletter for all the latest news and reviews about what's new in Joburg!