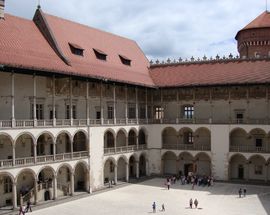 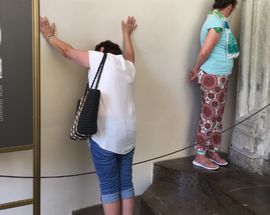 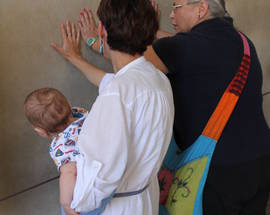 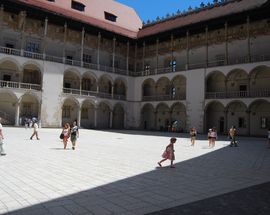 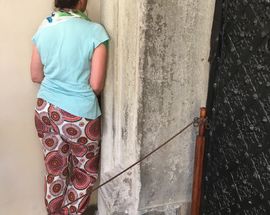 One of Wawel’s most well-known, but officially unendorsed legends is that of the fabled chakra stone. A chakra, fyi, is a natural energy point or centre of consciousness found in every living being, as believed in the religious, spiritual and yogic traditions of India, China, and some new age groups in the West. According to chakra doctrine, there are many chakra points in the human body, but seven are considered to be the most important, and these correspond with the seven sacred stones the Hindu deity Shiva flung across the earth as a gift to mankind. Those seven stones just so happened to land in what are today some of the most important spiritual centres on earth, namely Rome, Mecca, Delhi, Delphi, Jerusalem, Velehrad (Czech Republic? - must have been bad aim) and – oh, what do you know? – Wawel Hill, specifically, beneath the Chapel of St. Gereon.

CLICK 'READ MORE' TO SEE THE EXACT PLACE WHERE THE CHAKRA IS.

At least that’s where believers claimed to have felt its cosmic energy the strongest, before the chapel was closed and the area around it made inaccessible. Nevertheless, you’ll still find some believers and curious tourists in the northwest corner of Wawel’s Renaissance courtyard (directly left of the courtyard entrance), trying to get near the energy source and absorb its good vibes by placing their hands or entire backs against the wall. Doing such won’t earn you much sympathy from the Castle staff who consider the legend a nuisance and have done everything they can to deflect attention away from Wawel’s famous corner, including putting up a sign asking people to refrain from touching it (not working, fellas), roping it off, putting museum exhibits over top of it and having a guard stand nearby - as was the case during our last visit. Some people credit the chakra with protecting the city through its tumultuous history, but Wawel tour guides are stricken from speaking about the chakra stone, as you’ll quickly learn if you broach the topic with one. The Catholic Church and its firm followers also dismiss the legend of the chakra, despite the fact that its location at the most important spiritual site in the country (Wawel Cathedral), could just as easily be seen as a compliment. Whatever the case, there are indeed strange and powerful forces at work on Wawel Hill.

/krakow/Niepolomice-Chakra_89848v
Commonly known throughout history as the ‘Second Wawel,’ it shouldn’t come as surprise that the Royal Castle in Niepołomice shares (steals?) …
see more