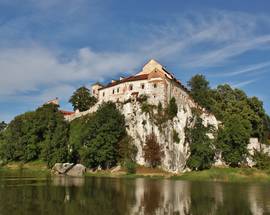 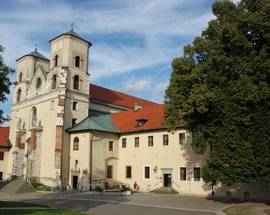 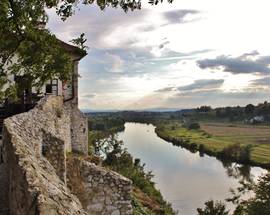 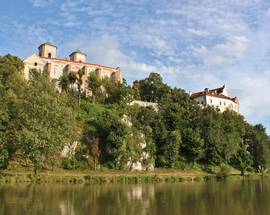 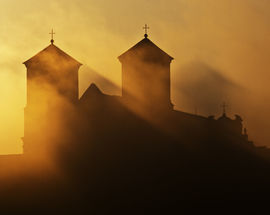 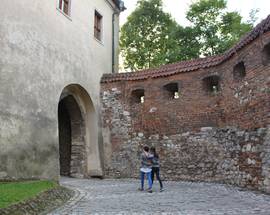 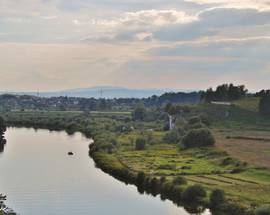 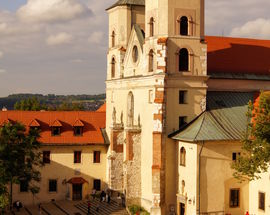 Monastic orders apparently each have their own personality and the Benedictine order based in the Kraków suburb of Tyniec is roughly the equivalent of a happy-go-lucky type that loves to shoot the breeze and have a microbrew or two over dinner. If you are expecting sombre stares, vows of silence, lives of restraint and a general sense of withdrawal from the outside world, then you’ve definitely come to the wrong abbey. You were thinking of the Camaldolese order from just across the river. But, the only thing the Camaldolese have on the boys at Tyniec is a better view of the Tyniec Abbey and church grounds, majestically perched on a white limestone ridge with a commanding view of the Wisła River (and their ‘rivals,’ the Camaldolese). Life is much easier and far more social for the Benedictine monks, and they’ll gladly tell you all about it if you bother to ask. Throughout the entire Abbey complex the monks are visible, social and surprisingly accessible and interactive. When you head down to the restaurant for a traditional meal or up to the coffee house for the best view of the area, you may well find a monk or two sitting right alongside you, enjoying the same view and the very same beverage. It is hard to imagine a more gregarious religious order, especially so close to the tourist capital of Poland.

The Benedictine order has been around for quite a while – nearly 1000 years in fact – originally founded by Kazimierz the Restorer in 1044. They’ve lasted through centuries of foreign domination and suffered the relocation of Poland’s capital to Warsaw from Kraków, but managed to keep the Abbey functioning throughout most of their history. The era of Poland’s partition (1795-1918) was particularly daunting, and featured time periods where the monastic order largely abandoned their location. Ironically, it was in 1939 that the order rebounded for good in tandem with the Nazi invasion and annexation of most of Poland, including the Kraków region. As you can imagine, the monks believe it was due to divine intervention that they avoided the lethal wrath of the Nazi authorities during the years of German occupation and emerged relatively unscathed from the Second World War.

The order then thrived, even under forty years of a Communist regime that was clearly uncomfortable with - and occasionally threatened by - organised religion in general and the Roman Catholic Church in particular. The town of Tyniec was incorporated into the Krakow municipality in 1973, and is now just another distant (albeit uniquely charming) suburb. The city’s bus-lines and bike paths have now extended out to this ancient development, making it a cinch to get to. Rain or shine a half-day trip out to Tyniec is rewarding and is a surprisingly serene and charming setting just outside the heavily-touristed areas of Kraków. Even if you could find another place to hang out with amiable monks and snap scenic shots of Poland’s historic heartland, why would you skip this one?

Places to Visit at Tyniec

/krakow/getting-to-tyniec_137712v
Getting to Tyniec is half the fun. It’s only about ten kilometres from the city-centre and is easily accessible by car, bus, bike, or even on foot (if you have …
see more
Tyniec

The Benedictine Abbey in Tyniec

ul. Benedyktyńska 37
EDITOR'S PICK
/krakow/the-benedictine-abbey-in-tyniec_74602v
Beyond the imposing archway entrance - which reflects the partially defensive design of the complex – the pathway widens and becomes a cloister (an open …
see more
Editor's pick
Tyniec

ul. Benedyktyńska 37
/krakow/SS-Peter-and-Paul-Church_85520v
The Saints Peter & Paul Church itself is impressive, and does finally remind you that you are visiting a devout monastic order rather than some cheesy …
see more
Tyniec

ul. Benedyktyńska 37
/krakow/tyniec-abbey-museum_85521v
Toward the back of the main courtyard, just beyond the coffee shop in conjunction with the information centre, lies the museum. The museum highlights the …
see more
Tyniec

ul. Benedyktyńska 37
/krakow/tyniec-cafe_85524v
Once you’ve arrived, especially if you’ve chosen to try the home-cooking rather than bringing your own picnic, you should plan to take advantage both of the …
see more
Tyniec

ul. Benedyktyńska 37
/krakow/Tyniec-Guest-House_85525v
As final proof of the unrivalled openness of this monastic order, they surprisingly offer modern and quite affordable housing in their Guest House right there …
see more
Tyniec

ul. Benedyktyńska 37
/krakow/produkty-benedyktynskie_85522v
Before you go, it’s practically mandatory to visit the Delikatesy where the Benedictines really show off their entrepreneurial skills. Although not all the …
see more
Tyniec

ul. Benedyktyńska 37
/krakow/tyniec-bookshop_85541v
The bookshop is rather modest and also offers a few Benedictine religious items and accessories. Unless you're specifically hunting for a good history of the …
see more
Tyniec

ul. Benedyktyńska 37
/krakow/mnisze-co-nieco-tyniec-abbey-restaurant_85523v
The restaurant is simple and modest, but we know you didn’t come to a monastic order in search of four-star cuisine. The food is home-cooked, of course, and …
see more