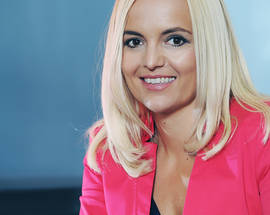 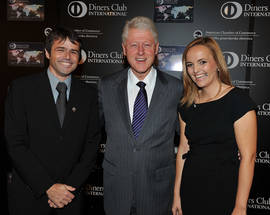 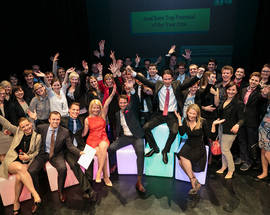 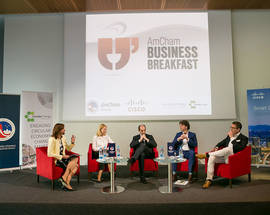 Ms Vodnik worked in media for 14 years, first as a journalist, then as editor-at-large and TV host, and went on to launch the Slovene TV station Paprika when she was just 29. As an entrepreneur and leader she realized how very important is to lead people with positive energy. At its peak Paprika employed more than 50 people, after five successful years Ajša decided to sell her stake in the company and leave the field of media. During her time there she hosted more than 300 interviews with top Slovene and international businesspeople, leaders and opinion makers, including such notable names as American President Bill Clinton and General Colin Powell.
​
Ajša holds a master degree in communication, and from 2007 she has worked as consultant for strategic communication, consultant for business communication and communication coach for managers of the biggest Slovene companies. She is currently the Executive Director of the American Chamber of Commerce in Slovenia - or AmCham Slovenia as it is colloquially known. She also serves as one of six elected Ex-Co Members of the European AmCham network, which represents 42 AmChams throughout the continent. She is a co-author of the AmCham Young Professionals ProgramTM, which aims to transfer the best experience from business leaders and professionals to future generations, and sees some 130 young people between the ages 25 to 35 participate annually. Ajša is also one of the organisors of Corporate Volunteering Week - Giving Back to Community and the Initiative Partnership for Change. Additionally, she is an active mentor to entrepreneurs and sits on the strategic council for the ABC Accelerator in Slovenia. She lives in Ljubljana with her husband and three children, who are her best coaches for recognizing the most important values of life.

What are the top 3 must visit destinations in Slovenia?
The usual suspects would be lake Bled, with its small island in the middle where many happy couples promise they will love each other for eternity; Postojna Cave, with more than 24km of passages, galleries, hallways and unique subterranean experiences; and the capital city Ljubljana. My personal top three choices would definitely be Ljubljana, guarded by dragons, with its romantic little streets, all its greenery and rainbow of opportunities for doing sports and having fun; Bohinj, with almost zen-like peacefulness and mystical energy; and Lipica with its magnificent white horses whose movements reflect the invincible power of life. Nevertheless, sLOVEnia can surprise you in so many ways; you just need to follow your heart.

What off-the-beaten-path destinations in Slovenia do you recommend visiting?
Planina Pri Jezeru, where you need to put on your hiking shoes and head to the Slovenian mountains. The trail is suitable for beginners and children and the atmosphere here is excellent. You get transported to the past, meeting mountaineers with only happy faces. Then there's Idrija, a little town with big artists who almost do magic as they transform thread into lace. Štanjel with its delicious food and genuine people. The Soča Valley with the amazing emerald Soča River, where you can also indulge in adrenaline sports. And finally, with the soaring Alps as a backdrop, the Logar Valley is one of the most beautiful places you will ever see! The location is quite remote, but if you want to get away from it all, breathe in the fresh air and go for long, glorious walks followed by traditionally cooked dinners, this is a great place to go.

What are your favourite Slovenian souvenirs to bring as gifts when you travel abroad?
Original Slovenian salt produced in the old-fashioned way. The Piran Salt Pans are among those rare salt pans in the world where salt is still produced using centuries-old processes, involving entirely natural crystallisation, working by hand and employing tools and procedures used by our ancestors. It shows the old tradition that goes back some 700 years of natural cohabitation between humans and nature and the importance of the preservation of the Salina landscape. Idrija Lace is also something that reminds me of tradition, and these masterpieces made by diligent lace makers astonish everyone. Gingerbread cookies, or so-called 'lectarstvo' in Slovene, is an old and renowned traditional handicraft of Slovenia. The decorated pastry is made from honey dough and shaped either with a wooden or a tin mould, or by hand. However, Slovenia is not only about tradition it is also about young artists and innovation and in this is something worth exploring too.

If a visitor only had one meal on their trip to Slovenia, what and where should it be?
Ajdovi žganci, a sort of 'buckwheat spoonbread' with sour milk. It is one of Slovenia's national dishes. The oldest preparation method explains the word žganci, which is comes from the Slovenian verb 'žgati', meaning 'to burn'. Ajdovi žganci are usually served together with meat sauces called 'obara' and various sausages, but my favourite version is with sour milk. The ingredients may vary in different regions. For me, this dish brings back memories of my favourite dish cooked by my grandma, and for tourists it can be reminder of simplicity and originality.

Any favourite Slovenian wines?
Rebula with its golden to amber colour, which gains all its potential and richness by help of strong Bora wind that blows through the Slovenia's coastal regions. Ribolla is one of the grape varieties native to western Europe, originating in Greece and thriving in the hilly landscapes there. Medieval records from the 13th century mention that the territory of Goriška Brda already had this type of Ribolla variety planted in its vineyards back then. It is a perfect match for white meat dishes as well as vegetables and fish.

What surprises your foreigner visitors most about Slovenia?
The exquisite beauty and diversity of nature, as well as the hopeful kindness of sLOVEnes.

Do Americans in particular have any stereotypes about Slovenia and Slovenians?
One of my American friends once said: “Slovenes are like coconuts, it is hard to enter to their hearts, but once you are in it is incredibly soft and pleasant.” In business circles you can find stereotypes such as Slovenes are stuck up, melancholic bureaucrats, with no sense of humour and impeccable sense of frugality. However, I seriously oppose all this nonsense and stereotypes, except for the one about how 'green' we are and working towards the preservation of nature.

What are the biggest cultural differences between Slovenia and the United States?
Americans always think that they are simply the best, while on the contrary Slovenes hardly believe that we are a great nation.

What makes Slovenia a great place for foreigners to live and work in?
The high quality of life. Let me offer just a few examples: you can ski in the high Alps and swim in the sea within two hours; the tap water quality is among highest in Europe; Slovenia is one of the safest countries in the world and also among the five most green countries. The quality of infrastructure is great, and it boasts a perfect geo-strategic position. The workforce is also highly educated and hard-working. On top of all that, there is a very special energy because of the mixture of mindsets of Latin, Germanic and Slavic cultures. And last but not least Slovenia is just the right size to live happy life.