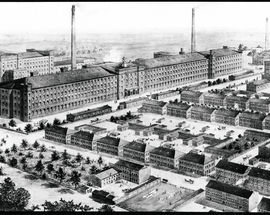 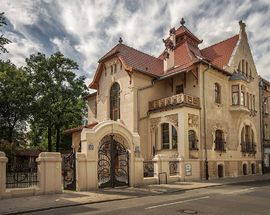 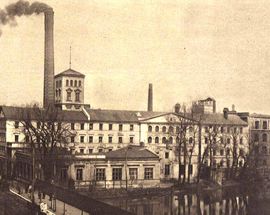 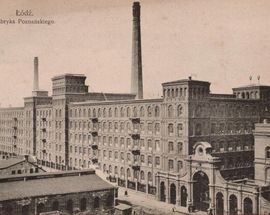 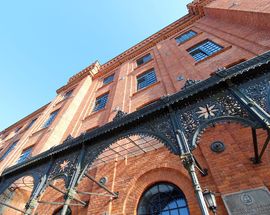 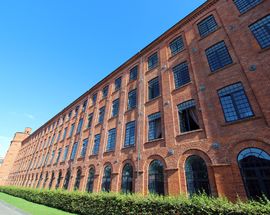 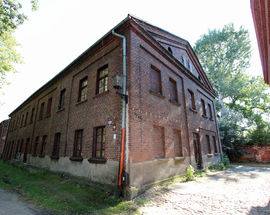 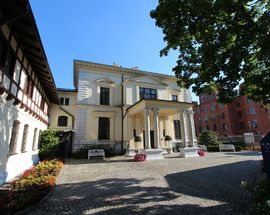 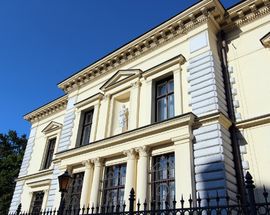 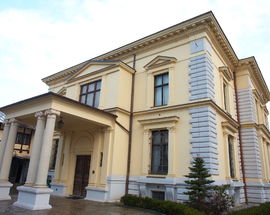 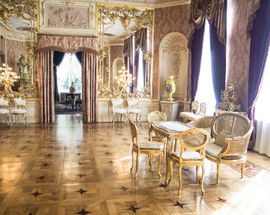 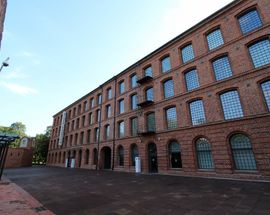 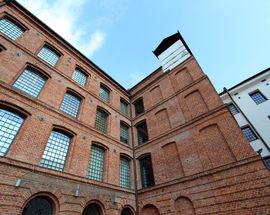 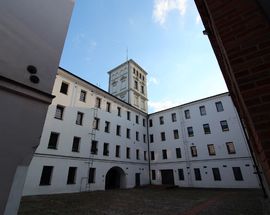 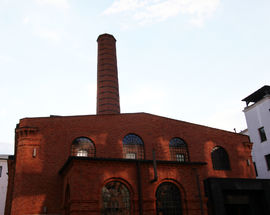 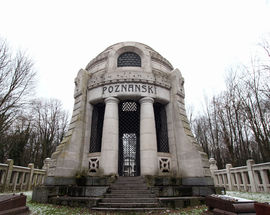 If you're a first-time visitor to Łódź, you've come at a truly interesting time. It's not that Łódź hasn't been worth visiting up until now, but the last decade has seen the city going through a major transformation, modernising at a quick pace, while focusing on the ace up its sleeve – its industrial heritage. This knack for change is nothing new in Łódź's history; in fact, it's pretty much the reason it exists as an important city in the first place. The Industrial Revolution sparked Łódź's initial rapid development, and it's now post-industrial urban redevelopment that is making the city an exciting and dynamic destination once again.

So how did this once small village turn into one of the most important industrial cities in Europe? It's time for a history lesson!

The first written record of a settlement here dates back to 1332, under the name Łódzia; 10 years later it was granted city rights by King Władysław Jagiello. Łodź essentially remained a small country backwater with a population of only about 800 through various political upheavals Poland experienced throughout the centuries - changing hands between the Prussians, Russians, and even being caught up in the Napoleonic Wars in the Duchy of Warsaw - before real change finally began in the 19th century.

In 1815, following Napoleon's retreat from Russia, Łódź was incorporated into the Russian-controlled Congress Poland. Although this far from pleased local Poles, economically it turned out to be a game changer. In 1820, state official Rajmund Rembieliński, who was interested in economic and urban expansion, set about redesigning the city's layout (which has since remained almost unchanged to this day), and crucially included transportation arteries. The city's cause was further aided when in 1825, statesman, philosopher and writer Stanisław Staszic started a campaign to turn Łódź into a centre of manufacturing. He drew the conclusion that Łódź was the perfect location to become a manufacturing hub, not least due to the numerous rivers and streams, which would provide water for the factories, but also for the abundance of timber from nearby forests.

The first cotton mill opened in 1825 and in 1839 the first steam-powered factory in Poland and Russia officially opened. A massive influx of workers from as far afield as Portugal, England and France came to the city, though the mainstay of the town’s population was made up of Poles and Germans, including many Jews. Those who lived in the surrounding rural areas saw Łódź as a means to move away from the tough settings they were accustomed to, so much so that Łódź became known as a land of milk and honey. Polish author and Nobel laureate Władysław Reymont put it thusly in his famous late-19th century Łódź-based novel Ziemia Obiecana (The Promised Land): "For that 'promised land' – for that tumour – villages were deserted, forests died out, the land was depleted of its treasures, the rivers dried up, people were born. And it sucked everything into itself. And in its powerful jaws it crushed and chewed up people and things, sky and earth, in return giving useless millions to a handful of people, and hunger and hardship to the whole throng."

Despite the tough conditions encountered by workers in Łódź, many still preferred their new lives in the city to working on farms. Within a matter of decades the city grew into the biggest textile production centre in the Russian Empire. In 1850, the customs barrier between Congress Poland and Russia was abolished, a move which saw Łódź’s economic influence grow further - the city enjoyed its most intense industrial growth between 1870-1890, during which time vast fortunes were made by the major industrialists. By the end of the 19th century, Łódź's population reached 300,000, and with it, not only did the city see prosperity, but growing inequality and dissatisfaction amongst the working classes, which came to a head in 1905 when the city's residents rose up in open revolt. Over 300 workers and protestors were killed as the Tsarist police force regained control of the city. By the outbreak of WWI Łódź was one of the most densely populated cities on the planet with a population of approximately 13,000 people per square kilometre. By 1915, the city came under German occupation though three years later the end of the war heralded Polish independence. The city lost nearly 40% of its population owing to the post-war influenza epidemic and a huge social migration of its German inhabitants. Łódź’s textile trade faced collapse after losing both Russian and German markets, with strikes and civil unrest becoming a feature of inter-war Łódź. The city's 'golden age' was well and truly over.

Following another World War and decades of stagnation during the Communist era, the ghosts of Łódź's industrial past are now being gradually revived and recalibrated to the needs of a modern 21st century metropolis. Today the third-largest city in Poland, it should come as no surprise that Łódź's top attractions are all directly tied to the old days of industry.

So what to see? The most obvious choice is Manufaktura, however, the city is full of post-industrial sites such as OFF Piotrkowska, Piotrkowska 217, EC1, the Central Museum of Textiles, Museum of Cinematography and the former vodka distillery Monopolis, to name a few. Something altogether different - the former villas of the industrialists have been turned into museums, schools, or used by local authorities. The most famous examples are the Neo-Baroque palace of Manufaktura's owner, Israeł Poznański, which is now home to the Museum of the City of Łódź. To gauge how rich Poznański was not only in finances, but in family, you need to also see his lavish Poznański mausoleum in the Jewish cemetery – not exactly modest! Another of the city's most outstanding architectural monuments is the Herbst Palace, once home to the Herbst and Scheiber industrial families, located at the former Księży Młyn factory (which once accounted for 15% of the total area of the city). Leopold Kindermann's Art Nouveau villa on ul. Wolczańska 31/33 (J-6) is also worth seeing.

You can easily contrast such extravagance with the very modest former worker tenements (still lived in today), which can be found across from the main entrances to Manufaktura at ul. Ogrodowa 24/26 and the former Księży Młyn factory complex on ul. Tymienieckiego 25A. This is a city littered with post-industrial sites just waiting to be explored. We hope to show you the main sights throughout our guide.

Museum of the City of Łódź

ul. Drewnowska 58
EDITOR'S PICK
/lodz/manufaktura_144205v
The Manufaktura complex today is the direct result of Poland’s largest renovation project since the reconstruction of Warsaw’s Old Town in the 1950s (something …
see more
Editor's pick
Places of Interest

ul. Piotrkowska 217
EDITOR'S PICK
/lodz/piotrkowska-217_157879v
Piotrkowska 217, which is conveniently also the address to tell your friendly rickshaw/taxi driver if you don’t feel up to a brisk walk or bike south, is a …
see more
Editor's pick
Museums

ul. Piotrkowska 282
featured
/lodz/central-museum-of-textiles-in-lodz_20755v
To understand exactly what Łódź is all about, and to really get under the city’s skin, a visit to the largest textile museum in Europe is a good place to …
see more
Featured
Museums

ul. Przędzalniana 72
/lodz/herbst-palace_20758v
The Herbst Palace is inseparably linked to the history of the Herbst and the Scheibler families, considered the wealthiest and most influential industrialist …
see more
Cultural Centres

ul. Tymienieckiego 3
/lodz/art-factory_157601v
This is a cultural centre that packs a punch. Not only is it a former industrial site, once part of Karol Scheibler's Księży Młyn complex (yes, it was that …
see more
Places of Interest

ul. Tymienieckiego 25A
/lodz/ksiezy-mlyn-herbst-palace_157882v
Księży Młyn (Priest's Mill) was first mentioned in 1484 in reference to a mill built on the Jasien River in 1387. The original complex was burnt to the ground …
see more
Art Galleries

ul. Wólczańska 31/33
/lodz/Villa-Gallery-Chimera-Gallery_21073v
Villa Gallery, otherwise known as 'Kindermann’s Villa' is one part of the City Art Gallery which has a long history dating back to 1924 - the oldest cultural …
see more