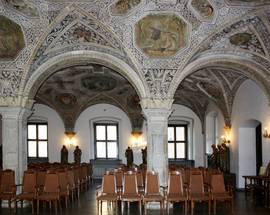 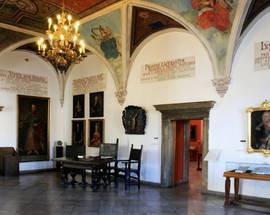 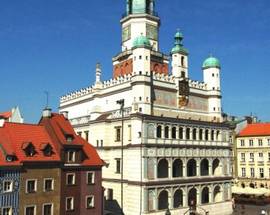 Closed for renovations. The show-stealing Town Hall proves a fitting venue for a museum of this stature. The gothic cellars – originally the municipal prison - hold exhibits dating back to the earliest times of settlement in the 10th century. On the ground floor, rooms built in the 16th century hold exhibits covering the city's urban and economic development during that time. The Renaissance Hall, Royal Hall and Court Hall on the first floor hold the most valuable documents and artefacts, and the opulent vaulted ceilings – depicting griffins, lions and eagles - are worth the photography surcharge alone. Exhibits include a 13th century crosier from Limoges, a table clock with the Poznań coat of arms from 1575 and a globe from 1688 – resist the temptation to give it a spin lest you wish to incur the wrath of hawkish curators. Much of the second floor is dedicated to the 19th century when the city was under Prussian rule, and features everyday objects and portraits of prominent citizens. The final part of the museum depicts the history of 20th century Poznań, and exhibits include the disturbing photograph of a swastika fluttering from the Town Hall.

Góra Przemysła
/poznan/royal-castle_125851v
Every European city worth its salt has a castle, and Poznań actually has two. Indeed, the 20th-century 'Zamek' wes
see more

14.03.2018
dori jungmann
Har Adar&#39; Israel
Dear madam, dear sir. i am looking for any avidance of my ansestors: the Jungmann family who where in Posnan at the 19th and 20th centuries. they had family in Breslau today Wroalaw. i will be very please to get any halp from you. thank you very much dori jungmann Israel
Take your guide with you Download a pdf