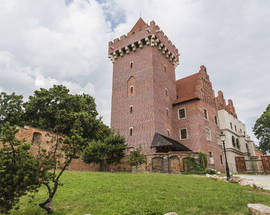 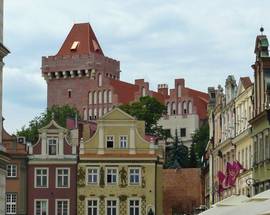 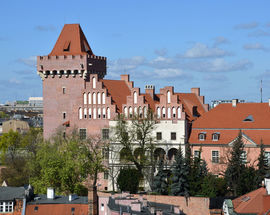 Every European city worth its salt has a castle, and Poznań actually has two. Indeed, the 20th-century 'Zamek' west of the Old Town is neither Poznań's oldest, nor most important castle. Wander just one block west of the market square and you’ll find yourself at the foot of Góra Przemysła, crowned by Poznań’s former Royal Castle.

Once the pride of Poznań, the original construction was begun approximately 1249 by Przemysł I - Duke of the Piast dynasty who had chosen Poz as his capital. Work on the royal residence was continued by his son, then expanded upon and updated in the architectural styles of the times over the years by subsequent rulers until its fortunes took a serious turn for the worse in early 18th century, from which it only recently recovered. Sacked several times in quick succession by the Swedes, the Russians, and then disgruntled nobles, the castle was never properly rebuilt, although Governor General Kazimierz Raczyński did rebuild the medieval ruins into a state archive in 1783 - a function it served until WWII. During the Siege of 1945, the castle had the misfortune of being in the line of fire with the Nazi stronghold on Citadel Hill and that was that.

In 1959 the decision was taken to rebuild Raczyński’s contribution to the hill, which became the home of the Applied Arts Museum. Until recently, the Castle’s rich historical value was undervalued, perhaps due to the untenable prospect of faithfully restoring it. Nonetheless, between 2010 and 2016, the castle was completely reconstructed and now once again overlooks the city. In addition to the Applied Art exhibits, the museum hosts a historical exhibit about the castle and Przemysł II on the ground floor, and the 43m tower can be climbed for fine views of the Old Town.

Exhibition tickets can be bought no later than 30 minutes before closing time.

Góra Przemysła 1
/poznan/applied-arts-museum_17455v
Housed in the Royal Castle of Poznań, this museum has recently undergone huge changes which shifted the focus from medieval craftwork and princely decorations exclusively to applied arts, rolling out a 2000-piece exhibition of furniture, fabrics, cera
see more

ul. Mostowa 7
/poznan/ethnographic-museum_17480v
Closed for renovations. Once one of Europe's greatest Masonic lodges, this 19th century building used to house an impressive collection of Wielkopolska folk culture but is now down to a small two-room rotating exhibit space that is cu
see more

Stary Rynek 1
/poznan/historical-museum-of-poznan_17456v
Closed for renovations. The show-stealing Town Hall proves a fitting venue for a museum of this stature. The gothic cellars – originally the municipal prison - hold exhibits dating back to the earliest times of settlement in the 10th
see more

Stary Rynek 45-47
/poznan/musical-instruments-museum_17471v
The only Polish museum of professional and folk instruments, with over 2000 items from Poland and around the world. Combining music, history, and ethnography, it’s more interesting than it sounds. Three floors of exhibits include lutes dating back to
see more

Stary Rynek 9
/poznan/wielkopolska-military-museum_17454v
Situated inside a brutal communist-era pavilion, the Military Museum documents the history of the Polish military from the 11th century onwards. Starting with scythes and halberds the collection includes the armour of winged hussars, sabres, muskets a
see more