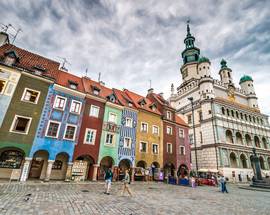 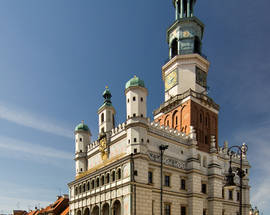 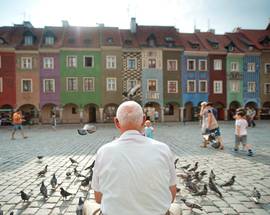 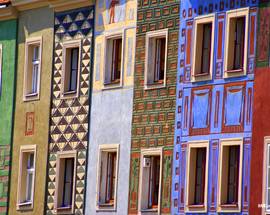 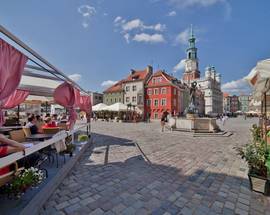 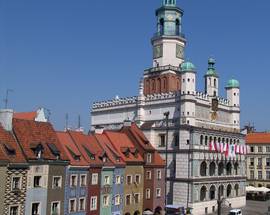 So here we are, right in the middle of this gorgeous historical city, Poznań. You're in the right place - as it happens, this lovely square isn't just a looker. Packed with monuments, landmarks, museums, and mementos from the city's rich history, it warrants more than a passing glance and smartphone pic. Faithfully reconstructed after the immense damage of WWII, the Main Square can easily take a few hours to properly explore and enjoy.

The most impressive structure on the Main Square has to be the deliciously elaborate Town Hall at its centre. First erected in the early 14th century, it truly flowered in mid-1500s when Italian architect Giovanni Quadro of Lugano added the Renaissance loggia, attic, and classical tower, earning the structure acclaim as “the most beautiful Renaissance town hall north of the Alps”. Unfortunately, a catalogue of historic disasters - including a 1675 fire, 1725 hurricane, and WWII bomb damage - have resulted in the sad reality that today little of the original structure actually remains, though it has been faithfully rebuilt to retain its status as the city's showpiece.

Today the Old Town Hall houses the Historical Museum of Poznań, whose collection encompasses exhibits from the 10th century till the present day. The biggest draw is the Great Entrance Hall with its elaborately decorated vault, supported by two huge pillars. The tableaux are inspired by Biblical and mythological figures. Similar decorations, including four pairs of female allegories of virtues, can be seen gracing the building’s facade.

Crowds gather outside the Town Hall each day to witness two mechanical billy goats emerge from a door above the clock at precisely noon and proceed to butt heads twelve times. Simultaneously, a trumpeter plays the town’s traditional bugle call from a balcony. The bugle call (hejnał) dates back at least to the 15th century, and the goats have been ramming heads since 1551. Replaced and restored over the years, the present pair have been at it since 1954. Of course there’s a half-baked legend to go along with them: when the clock was completed in 1511, the governor of the Poznań province was invited for the unveiling. The hapless cook preparing the celebratory feast burnt the venison, so he went out and managed to steal a pair of goats to serve instead. Alas, the goats escaped and traipsed up to the top of City Hall, where they began butting heads, amusing the collected crowd and the governor himself, who decreed they be added to the clock.

Just outside the Town Hall, near its southeast corner, you’ll find the proudly protruding Pranger, a 16th-century punishment device funded by fines placed on servant women, wet-nurses, and barmaids who dressed up too frilly or wore jewellery deemed inappropriate for their social standing (the outrage!). Topped with a severe statue of a sword-wielding executioner in a Crusader’s outfit, unlucky criminals would be chained to this octagonal column and whipped, or - if the executioner was feeling fancy or the crime warranted it - have his ears or fingers chopped off. Sadly, the contraption no longer elicits deserved fear, as evidenced by repeated vandalism by drunken students and football hooligans - an offence which would surely be more creatively punished in the Pranger’s heyday than in our current times. Luckily, the original isn’t actually in any danger, as it has long been moved to the Historical Museum and replaced with a copy.

To the left of the Town Hall is perhaps the most recognisable Poznań sight: the picture-book-worthy, technicolor row of townhouses planted right in the middle of the Main Square. Originally called “herring shops” (budy śledziowe), they were home to merchants, and their arcades held fish, candle, torch, and salt stands. They were later renamed to Budnicy Houses (domki budnicze) in honour of a class of merchants known as Budnicy, whose headquarters used to operate at no. 117. Look closely and you’ll see their coat of arms on the facade: three palm trees and a herring.

Moving clockwise around the centre of the Main Square, we come across two sad concrete carbuncles haunted by the ghost of the beautiful Cloth Hall that stood in their place before World War II. The one closer to the merchant houses is now the Wielkopolska Military Museum, while the one on the left houses Arsenał, a contemporary art gallery originally known as the Central Exhibition Bureau.

Continue clockwise, and the 18th-century police guardhouse will come into view. Originally haphazardly constructed using wood, it was redone in classicist style by Jan Chrystian Kamsetzer in 1783-1787. In the inter-war period, it served as a garrison jailhouse. Like much of the Old Town, this structure was all but levelled in the Battle of Poznań in 1945, and the building had to be reconstructed in later years, serving as the Workers’ Movement Museum during communism. It currently houses the 1818-1819 Wielkopolska Uprising Museum.

A few steps away is the cute, freestanding Municipal Scales building, which almost looks like something out of Hansel and Gretel. Originally constructed in 1534, it once housed hardware for weighing merchandise on its way to the market. The little that remains of the original furnishings are now located in the Historical Museum, and the building itself is used by the city’s civil registry to issue marriage certificates. Right next to this charmer you’ll find a small statue of a traditionally-dressed Bamber peasant girl carrying jugs used in wine-making. Who were the Bambers? These poor Catholic farmers from Bavaria came to Poznań around 300 years ago at the invitation of the city authorities to help rebuild villages devastated by war and plague. They assimilated quickly into Polish society, playing an important part in the history and culture of Poznań. You can find out more about this unique group by visiting the Poznań Bamber Museum (ul. Mostowa 7/9). The statue, completed in 1915, doubles as a well, originally meant to provide drinking water for horses.

Speaking of water-spouting sculptures, you’ll find four mythological fountains guarding the four corners of the square: they depict Neptune, Mars, Apollo, and - perhaps in order to combat the under-representation of the fairer sex - Proserpina. Of the four, only Proserpina is the original, dating back to 1766; it depicts the goddess of grain and agriculture being abducted by the God of the Underworld. The other three fountains were revealed between 2002 and 2005 and placed in their correct historical spots. Between Apollo and Neptune there’s one more monument worth admiring - the 1724 figure of John of Nepomuk (Jan Nepomucen), a Bohemian martyr saint who was tortured and drowned in the Vltava River after refusing to divulge the Queen of Bohemia’s secrets of the confessional to her jealous husband Wenceslaus. It was hoped that the saint would be able to protect the city from repeated, disastrous floods, but ultimately the 1960’s re-routing of the Warta River did a far better job of that.

For the last leg of our brief walking tour, let’s move to the townhouses circling the square. Though it may not look like it at first or even second glance, among them stand no less than three palaces. The baroque Działyński Palace at no. 78 and the classicist Mielżyński Palace at no. 91 have had very similar fates. Erected in the late 18th century, they were completely destroyed during WWII, and reconstructed in the 1950’s (in the case of the former, sans eastern wing and French garden, which were deemed too lavish by the communist authorities). An older, luckier, and perhaps more relevant structure stands at the southeast corner. The beautiful Renaissance-style Górka Palace (ul. Wodna 27), currently painted cotton-candy pink, was constructed in the 16th century by the wealthy Górka family and currently houses the Archeological Museum, which owns the most extensive collection of ancient Egyptian artefacts in Poland.

Stary Rynek
/poznan/budnicy-houses_151722v
To the left of the Town Hall is perhaps the most recognisable Poznań sight: the picture-book-worthy, technicolor row of townhouses planted right in the middle …
see more
Museums

Stary Rynek 9
/poznan/wielkopolska-military-museum_17454v
Situated inside a brutal communist-era pavilion, the Military Museum documents the history of the Polish military from the 11th century onwards. Starting with …
see more
Monuments

ul. Paderewskiego 2
/poznan/odzysk_151747v
The weirdest spot on the Old Market Square, this former squat is a testament to the city’s large anarchist presence. The late 19th century building on the …
see more
Places of Interest

Stary Rynek
/poznan/municipal-scales-building_151723v
This cute, freestanding building on the Main Square almost looks like something out of Hansel and Gretel. Originally constructed in 1534, it once housed …
see more
Monuments

Stary Rynek 84
/poznan/literary-museum-of-henryk-sienkiewicz_17481v
Winner of the Nobel Prize in 1905, and once one of the world's most popular authors, Sienkiewicz is best known internationally as the author of Quo Vadis, a …
see more
Museums

Stary Rynek 45-47
/poznan/musical-instruments-museum_17471v
The only Polish museum of professional and folk instruments, with over 2000 items from Poland and around the world. Combining music, history, and ethnography, …
see more
Museums

Stary Rynek
/poznan/proserpina-fountain_150468v
One of four fountains in each corner of the market square depicting characters from Roman mythology, only ​Proserpina is the 'real McCoy' (to use a …
see more
Monuments

Stary Rynek
/poznan/mars-fountain_150469v
One of four fountains on the Old Town Square, Mars was sculpted by Rafał Nowak and unveiled in 2005 to replace the long-lost original.
see more
Monuments

Stary Rynek
/poznan/apollo-fountain_150470v
One of four fountains on the Old Town Square, Apollo was sculpted by Marian Konieczny and unveiled in 2002 to replace the long-lost original.
see more