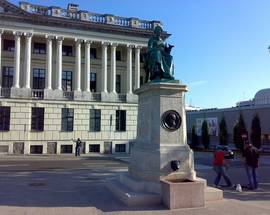 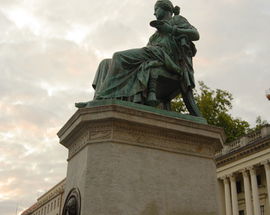 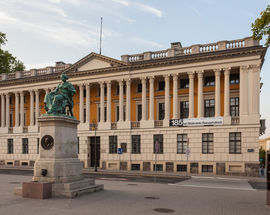 The Greek goddess Hygieia can be seen sitting serenely upon a water well on Plac Wolności. The story begins in 1841 when Edward Raczyński co-founded the city Waterworks, choosing to place a well, decorated with intricate reliefs, between Marcinkowskiego and 23 Lutego streets. Raczyński intended the well to be further embellished with the goddess of good health, cleanliness, and hygiene, and he commissioned a statue from sculptor Albert Wolff, designed to have the features of Raczyński's wife Konstancja. However, due to personal and professional issues involving accusations of fraud during a project to reconstruct the Golden Chapel, Raczyński committed suicide in 1945, never picking up the completed statue. It was eventually placed on his grave by Konstancja, but the well would remain bare until 1908, when it was moved down to ul. Podgórna and finally adorned with a re-cast of Hygieia to mark the expansion of the city waterworks. In 1971 the well was moved to its (quite fitting) current spot, right outside the Raczyński Library.

Plac Wolności
featured
/poznan/plac-wolnosci_152037v
Though it is difficult to imagine now, Poznań’s large and typically empty 'Freedom Square' was once the heart of the city - a favourite spot of the upper classes for strolls and coffee. Originally named Wilhelmsplatz (William’s Square) in honour of Ki
see more
Featured