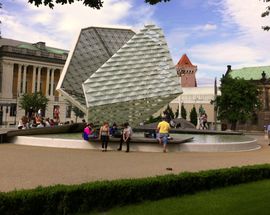 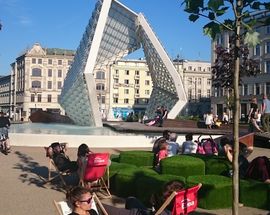 Though it is difficult to imagine now, Poznań’s large and typically empty 'Freedom Square' was once the heart of the city - a favourite spot of the upper classes for strolls and coffee. Originally named Wilhelmsplatz (William’s Square) in honour of King Frederick William III of Prussia, it was demarcated by the city’s new Prussian authorities at the very end of the 18th century, soon after Poland was wiped off the map by the three partitioning forces of Prussia, Russia, and Austria-Hungary. The main reason for a square this large? Big-headed higher-ups needed a representative space capable of containing an entire infantry regiment during military parades. A fire in 1803 helped to “clean up” the area, and a Jewish cemetery was liquidated to make more space, while a new theatre was built to give the square a touch of class (today the renovated building, known as Arkadia, houses an Empik bookstore and tourist information centre). For a brief period between the 1806 Wielkopolska Uprising (and subsequent invasion of Prussia by Napoleonic forces) and the 1815 downfall of the semi-independent Duchy of Warsaw, the square was renamed in honour of Napoleon, and things were looking up for Poznań’s Polish populace; then it was back to Wilhelmsplatz and Prussian parades.

In the years leading up to the Great War the square underwent numerous changes, as Polish and Prussian institutions vied for space and influence, encircling the space with buildings designed according to the latest architectural fashion; those included St. Adalbert’s Publishing House (now St. Adalbert’s Bookstore aka Księgarnia Św. Wojciecha, no. 1), the Haase Department Store (no. 4), the Brandt Department Store (no. 8), the Raczyński Library (no. 19), the Provincial Museum in Posen (now a National Museum building, Al. Marcinkowskiego 9), and Bazar Hotel (Al. Marcinkowskiego 10). A monument to the 1866 Prusso-Austrian Battle of Nachod popped up, as did a figure of war hero General Steinmetz, and, finally, King Wilhelm III; all three were torn down triumphantly when Poznań returned to Polish hands following WWI, and the square was given its current name. It wouldn’t last; after a blissful 20 interwar years, during which the square functioned as the cultural centre of Poznań, the square was dug open with trenches in preparation for WWII, and soon German forces once again marched in, renaming the square - you guessed it - Wilhelmsplatz. After the war (and another name change), Plac Wolności was rebuilt according to the concept of Witold Milewski and Zygmunt Skupniewicz, with trees cut down and a Hygieia statue (which had been placed on the square in 1908 to commemorate the expansion of the city waterworks) moved in front of the Raczyński Library. In 2005 a large underground parking lot was added, and in 2012 Freedom Square’s most recognizable landmark was unveiled - the Freedom Fountain (Fontanna Wolności), a geometric structure with two 10-metre wings (or sails) made out of glass. Nowadays the square is the go-to for holding protests and demonstrations.

Al. Marcinkowskiego 10
/poznan/bazar-hotel_78743v
So what of the hotel at the centre of the Wielkopolska Uprising? Its history goes back to 1838, a time when Poznań was under Prussian occupation, and Polish institution
see more

Plac Wolności 18
/poznan/freedom-fountain_155397v
Back in 2005 plans were made to revitalise the run-down Freedom Square, and the city authorities decided to go for a 'statement piece' - a large fountain to bring some interest to th
see more

Pl. Wolności
/poznan/hygieia-monument_56052v
The Greek goddess Hygieia can be seen sitting serenely upon a water well on Plac Wolności. The story begins in 1841 when Edward Raczyński co-founded the city Water
see more

Pl. Wolności 19
/poznan/raczynski-library_152049v
Founded in 1929 by Count Henryk Raczyński (the man responsible for the Poznań Waterworks), this institution was the first public library in Prussian-occupied Poland. The original collection was amassed by Raczyński himself mostly from dissolved monast
see more