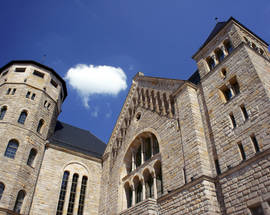 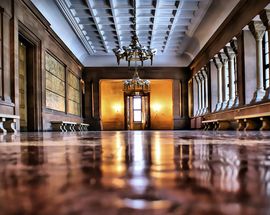 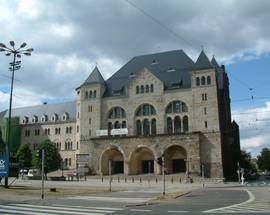 More a palace than a 'castle,' work began on Poznań's fearsome 'Zamek' in 1905 to serve as the provincial residence of Kaiser Wilhelm II. Designed in the neo-Romanesque style by Franz Schwechten, the west wing held Wilhelm's living quarters, the east wing his immaculate throne room, with the northern part of the complex consisting of service rooms and beautiful gardens based on the Alhambra's Courtyard of the Lions. The Kaiser got the keys in 1910 but didn't stay long before WWI and the following Wielkopolska Uprising resulted in a Polish Poznań once again. Between the wars the Zamek became the seat of Poznań University, before the Third Reich swooped in and Albert Speer, Hitler’s pet architect, transformed the tower chapel into the Fuehrer’s office (though Hitler would never step foot in Poz), and the second floor into the residence of Arthur Greiser (Nazi governor of the district). The castle was badly damaged during the Soviet liberation and there was even a post-war campaign to have the structure bulldozed. In the end the drastic measures stopped with reducing the principal tower to a third of its original height.

Used by the University in the two years following the war, and then as the seat of local government, the Zamek has operated as a cultural centre since 1962, hosting hundreds of theatre performances, concerts, film screenings and other events in its palatial halls each year. The basement houses the 1956 Uprising Museum, and throughout the large complex visitors will find several restaurants, cafes and bars, including the popular Dubliner Irish Pub. If you're interested in a proper guided experience, audioguides and app guides can be rented for 20/17zł.

ul. Św. Marcin 80/82
/poznan/1956-uprising-museum_21731v
The Zamek is an impressive building alright, but pride of place goes to the 1956 Uprising exhibition, honouring the first armed resistance the communist regime faced. Hidden down a side entrance, this basement masterpiece features a tank, stretchers u
see more

ul. Św. Marcin 80/82 (entrance from Al. Niepodległości)
/poznan/dubliner_17249v
The most venerable of the city’s Irish pubs, the Dubliner is on an upswing of late with live music acts at 21:30 on Thursdays, Fridays, and Saturdays, and a Mon-Fri 13:00-18:00 (plus all-day Sunday) special that knocks 50% off the food prices. Tucked
see more

ul. Św. Marcin 80/82
/poznan/zamek-culture-centre_19163v
Built originally as a royal residence (see 'what to see') at the turn of the 20th century by Franz Schwechten to a design ordered by Kaiser Wilhelm II, today this is one of Poland's biggest cultural institutions. Hosting over 2 500 events annually in
see more