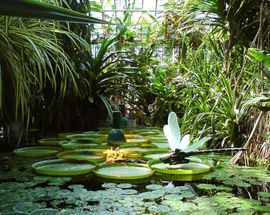 Built in waves beginning in 1910, the Palm House in Wilson Park began as a small showcase for palm trees and cacti and is now one of the largest of its kind in Europe. After the Red Army liberated Poznań in 1945 the heavily damaged Palm House lost almost all of its tropical plants, though quickly restocked and reopened again in 1946. Today the interior is filled with 1100 species of plants from all over the globe and 170 species of fish - including some of the largest goldfish we’ve ever seen. While all of the minimal signage is in Polish and Latin, it doesn’t inhibit your visit if the goal is awe. The soaring greenhouses include plants from savannahs, deserts, and tropical climates (and the temperature reflects that; be prepared to shed some layers when visiting this humid site) interspersed with tanks that host creatures like iguanas and giant snakes. Located just west of the train station, the easiest way to get there is catch the number 13 tram south of the market square ('Wrocławska' or 'Marcinkowskiego') and get off at 'Matejki,' from which it's only a short walk south.

between ul. Głogowska, ul. Matejki and ul. Berwińskiego
/poznan/wilson-park_17477v
Łazarz's most popular park originated in 1834 as a tree nursery supplying plants for local streets and squares during the district's rapid expansion. In 1902 the land was handed over to city authorities, who soon used it to create Poznań's first botanica
see more