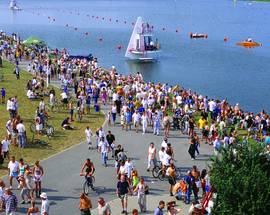 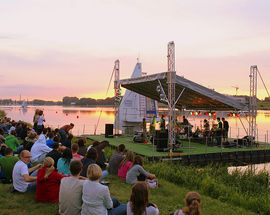 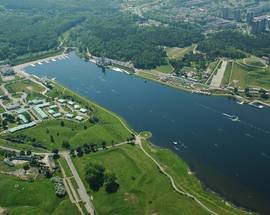 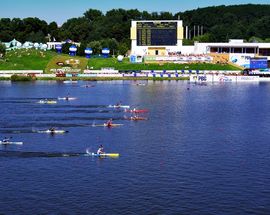 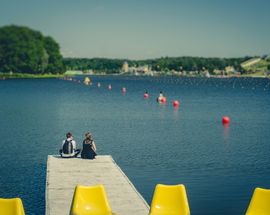 Of Poznań’s many lakes it’s Malta - to the east - that is the best known, and its surroundings are well worth further investigation. Formed in 1952 as a result of damming the Cybina, this 2.2km long lake is the largest man-made lake in the city, with an average depth of 3.1 metres. Surrounded by parks and woodland, it is today one of the principal recreation areas in the region - in both summer and winter - with an ice-rink, ski slope (the first in former communist Europe), a world-class regatta course, zoo, water park, and dozens of other attractions, including several historical sights. Just east of the centre, but miles from the madness of the market square, if you’re in town to decompress, head to Malta.

What you see before you wasn’t always a lake, but rather more of a river running by Poznań. In 1178 Prince Mieszko invited representatives of the Knights Hospitaller to the region, and they in turn built St. John of Jerusalem Church - now regarded as the oldest brick place of worship in the country. By 1530 the West European branch of the Knights had resettled on Malta, and so their order found itself renamed The Knights of Malta. The chaps who had come to Poland followed suit, and soon the locals were also referring to the area they decamped to as ‘Malta.’

For the next few hundred years Malta went largely unnoticed, and it was only in the 19th century that the people of Poznań suddenly realised they had a great place to head for a weekend stroll, or wobble around on a newfangled contraption called a bicycle. Adding to Malta’s appeal was its dense greenery and relative isolation from prying eyes, making it popular with frisky couples. After WWI numerous ideas for Malta came to the fore, but all eventually hit a wall with the exception of Adam Ballenstaedt’s ‘Freedom Mound.’

Not ones to faff around and wait for planning permission it was the Nazis who actually changed Malta to the Malta we know today. It was on their initiation that thousands of slave workers were drafted in and began damming the river to create a lake, and while they never saw their plans realised, the communists who took over did. The job was finished in 1952, and the results you can see for yourself.
Between 1980 and 1989 the lake was completely drained, and the surrounding area given a facilities facelift in time for the World Canoeing Championship in 1990. Today it’s still regarded as a top-quality course, as proven during the 2009 Rowing World Championships and the 2015 European Championships, both hosted here. An enormously popular leisure destination for people throughout the region, new attractions and facilities are constantly being added as the area’s allure continues to grow; keep scrolling to see the top activities to do at Lake Malta...

If there’s one highlight on the local cultural calendar then it has to be the Malta Festival, staged each summer, typically over multiple weeks in June. A Poz cultural institution since its inception back in 1991 as the 'International Theatre Festival,' past years have seen musical performances by Nine Inch Nails, Goran Bregovic, Jan Kaczmarek, Elvis Costello, Sinead O’Connor and the Buena Vista Social Club. Strangely, however, the musical focus is something of a recent trend. When it started the festival focused on theatre alone, and was promoted as something of a Polish version of the Edinburgh Festival – full of fringe acts performing abstract plays. Fortunately, and in spite of the growing pull towards the mainstream, alternative theatre still plays a huge part in the Malta Festival. On top of that, there are plenty of film screenings, workshops and exhibitions, both at Lake Malta and other venues across town. To keep up with all the plans for the festival each year, check the official website - www.malta-festival.pl.

Getting to Lake Malta

Lake Malta is situated just to the east of Poznań's city centre, and Rondo Śródka - at the lake's northwest corner, is the best place to access it. Below are the public transport options from three main points in the centre. Alternatively, a taxi from the centre to the north shore will cost about 30-35zł.

From the Main Train Station: Take tram number 6 from the 'Poznań Główny' stop (walk just past the Avenida shopping centre going east) directly to 'Baraniaka'. The journey takes about 14 minutes.

From the Old Town Square: Take tram number 3, 4, or 17 from either 'Pl. Wielkopolski' or 'Małe Garbary' to 'Rondo Śródka'.

ul. Termalna 5
/poznan/novotel-poznan-malta_17215v
A cost-effective, stout hotel on the edges of Lake Malta. You know what you’re getting with Novotel, and all codes of Western practise are tightly observed. It …
see more
Shopping Malls

ul. Maltańska 1
/poznan/galeria-malta_53584v
Located right next to Poznań's Lake Malta, Galeria Malta is the largest retail and entertainment centre in western Poland with over 162,000 square metres of …
see more
Churches

St. John of Jerusalem Church Outside the Wall

ul. Świętojańska 1
/poznan/st-john-of-jerusalem-church-outside-the-wall_17478v
'Outside the wall'? A strange but accurate name that refers to St. John’s location outside the medieval defensive wall that once surrounded the city. This is …
see more
Lake Malta

between ul. Warszawska and Lake Malta
/poznan/Park-Tysiaclecia_73696v
A park located on the bank of Lake Malta covering 26 hectares where, in the warmer months, you'll find the residents of Poznań taking walks. Completed by the …
see more
Places of Interest

ul. Wiankowa
/poznan/freedom-mound_36986v
Walk along ul. Majakowskiego until you reach Freedom Mound. Work on this man-made hillock began on May 3, 1919 with workers from across Poland volunteering to …
see more
Lake Malta

ul. Wiankowa 2
/poznan/malta-ski_55936v
Open until April 17th. Two ski slopes, one 150 metres in length, the other over 30 metres. Hours depend heavily on the weather. Private lessons with an …
see more
Monuments

ul. Wiankowa (Nowe Miasto)
/poznan/wielkopolska-uprising-scouts-monument_73771v
A short walk on from the Freedom Mound, the Scouts Monument was designed by Wawrzyniec Kaim to honour those scouts who died in the
see more
Lake Malta

/poznan/maltanka-mini-railway_59940v
Pleasing the paying public since 1956, this is one of the last 600mm narrow gauge railways in PL, faithfully pulled by 'Borsuk' (Badger) - a steam engine with …
see more
Lake Malta

ul. Jana Pawła II (corner of ul. Abpa A. Baraniaka)
/poznan/malta-skating-rink_59935v
A seasonal (Nov-Mar) indoor rink at Lake Malta with skate rental. For something a bit different visit on Fridays and Saturdays between 19:00 and 23:00, when …
see more
Camping

ul. Krańcowa 98 (Nowe Miasto)
/poznan/camping-hotel-malta-n155_17201v
A good site that won the Polish Camping and Caravanning Federation ‘Mister Camping’ crown back in 2006. Well-lit and secure with a cluster of lakeside …
see more
Lake Malta

Lake Malta
/poznan/malta-fountain_73716v
The largest floating fountain in Poland was unveiled on June 29, 2003 to mark the 750th anniversary of the founding of Poznań. Designed by Roman Ćwiertnia it …
see more
Lake Malta

ul. Wiankowa 2
/poznan/toboggan-run-pepsi_53462v
Hit speeds of 50km on this summer toboggan run, a daredevil experience that twists and turns the foolish and the brave over the course of a 530 metre track. …
see more