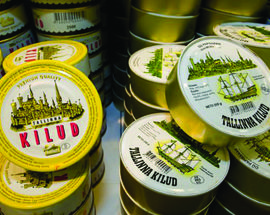 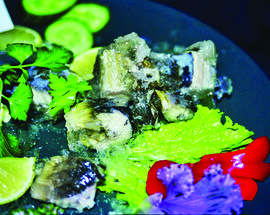 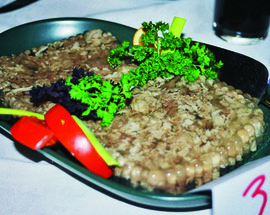 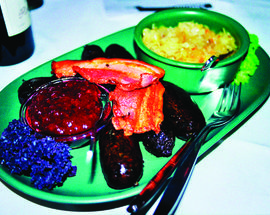 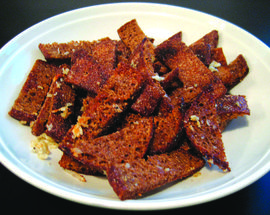 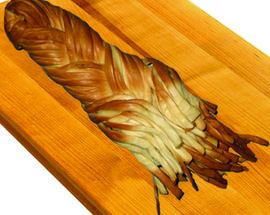 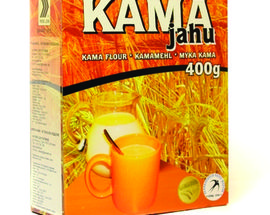 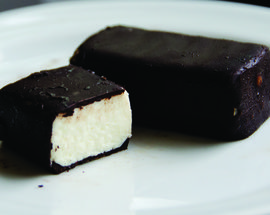 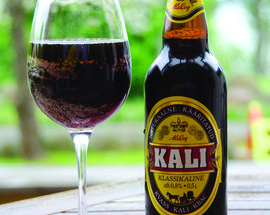 Traditional Estonian cuisine is, for the most part, a mix of whatever peasants could scratch together on the farm and whatever fishermen hauled in from the Baltic. You may notice a heavy Germanic influence – not surprising given the region’s cultural history. Taverns catering to local tastes will typically offer plates of pork schnitzel with heavy doses of potatoes or cabbage on the side. For those in search of something more exotic and uniquely Estonian though, we’ve put together this handy list of what to try and buy when you’re out dining or shopping. Terviseks!

Tallinna kilud
Spiced Tallinn sprats, sold in decorative tins, have been a mainstay souvenir of the city since as far back as the 1920s. These silvery little fish
often appear on kilu võilevad, snack-sized, dark bread sandwiches made with butter, onion and dill. Look for them in the salad and pastry counter of your nearest café.

Marineeritud angerjas
Marinated eel, served cold, is a true Estonian favourite. Sometimes it comes smoked (suitsutatud) rather than marinated, but either way, don’t be surprised to find it cut into small chunks and ready to spoon out at your hotel’s breakfast buffet. It’s also commonly served as part of a sour cream and vegetable salad.

Sült
Some foreigners are understandably too squeamish to try sült, a jellied meat dish made from boiled pork and pork bones. Still, locals love it, especially served cold with a spot of mustard on the side. It’s often made in large batches, so many Estonian families have stories of jars and jars of solidifying all over the house.

Verivorst
Estonia’s famous blood sausage is not nearly as macabre as it sounds and biting into it won’t leave you looking like an extra in a zombie film. It’s heavy on the barley and similar to what the English diplomatically call ‘black pudding’ due to its colour. You probably won’t see it on menus outside of November and December though, since it’s considered a traditional Christmas dish. It’s usually served with a tangy, red berry jam.

Küüslauguleivad
The ultimate Estonian beer/ bar snack is the local take on garlic bread. In this case, the bread in question is the real Estonian black rye bread, must leib, itself a must-try. The bread – either full slices, strips or cubes – is toasted to crunchiness and buttered. Then massive quantities of the pungent stuff is applied. Some pubs serve the garlic on the side, leaving the customer the option to rub it on and thereby regulate the strength.

Suitsujuustu pats
Resembling a braided rope or a peasant girl’s hair (albeit one who has been standing a little too close to the village bonfire), Estonian smoked string cheese is a surprisingly addictive snack. It’s harder and chewier than its counterparts in other countries, so it may take getting used to. Find it in the supermarket.

Kama
This oh-so-Estonian dessert is near and dear to the hearts of locals and really has no equivalent in most other traditions. Basically it’s a mixture of ground grains - rye, oat, barley, and pea flour - blended together with sour milk (keefir) to make a sweet, cold porridge. Just try it. If it’s not on your restaurant’s dessert menu, you can pick up the dried mixture at a food shop and make it at home.

Kohuke
Another much loved treat that’s hard to find outside the country is kohuke, which roughly translates to ‘little curd’. It’s essentially a bitesized chunk of cold, sweet curd covered in a candy glaze, most reminiscent of cheesecake. Various flavours are available but the traditional one is the chocolate-covered vanilla one. Kohuke is sold in individually wrapped, foil packages and can be found in the refrigerated dairy section of food shops.

Kali
Referred to as ‘the Estonian Coca-Cola’, Kali is a kind of low-alcoholic (up to 0.5%), fermented young beer. It’s sweet and has a very light fizz to it, making it a popular refreshment for generations of Estonian kids. Though it may look like root beer, it’s definitely not. Try it for yourself and test your Estonianness!