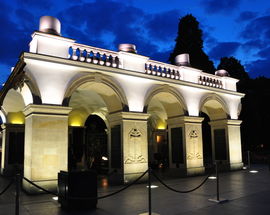 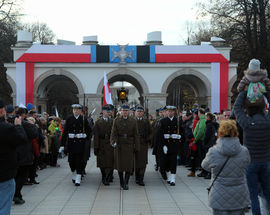 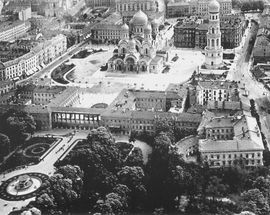 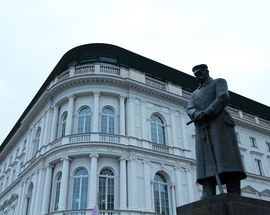 What is today Warsaw's largest square, used over the centuries for military parades and national celebrations, was a once a square in front of the now non-existent Saski Palace, destroyed during World War II. The only part of the palace that remains today is used to shelter the eternal flame and Tomb of the Unknown Soldier. The square is named after the legendary inter-war Polish leader, Marshal Józef Piłsudski; you'll find his statue at the far end facing the tomb with a sombre gaze. The square itself has undergone many name changes thanks to the altering political landscape, including during occupation when it was called Adolf Hitler Platz. Renamed Plac Saski following occupation, it was eventually given the communist title Victory Square (Plac Zwycięstwa) in 1946, until it was again changed in 1990 to what we know it as today. On this spot once stood the huge orthodox St. Nevsky Cathedral; considered a symbol of Russian oppression, it was destroyed after Poland regained its independence. It was here too that in June 1979, the newly appointed Polish Pope John Paul II, the first Pope to visit a communist country, gave an open-air holy mass to an estimated 500,000 people, instilling hope in the struggle against the oppressive communist system. On 10 April 2018, eight years after the Smoleńsk air disaster, a new monument to the victims, representing the gangway stairs of a plane, was unveiled in the square. A monument to late president Lech Kaczyński, who died in the crash, was added seven months later.

Pl. Piłsudskiego
/warsaw/jozef-pilsudski-monument_18399v
Casting a steely gaze over the square named in his honour is a gloomy looking Field Marshal Piłsudski, a man many Poles hold responsible for winning the country its independence in 1918. Regarded as a political and military hero this man did more than
see more

Pl. Piłsudskiego
/warsaw/lech-kaczynski-monument_157513v
A long time in the planning, the monument to the late President of Poland, Lech Kaczyński, was unveiled on 10 November 2018, just one day before Independence Day - this b
see more

Pl. Piłsudskiego
/warsaw/papal-cross_52901v
Nine metres high and made of white granite June 6, 2009 saw the unveiling of giant cross on pl. Piłsudskiego. It was here that Pope John Paul II returned to Warsaw for the first time after being made Pope, and it was also on this spot a candlelit vigi
see more

pl. Marszałka Józefa Piłsudskiego
/warsaw/saski-palace_42033v
One piece of lost Warsaw that many hope will rise again is the Saski Palace, formerly located in the grounds of Saski Park. Originally the residence
see more

Between ul. Marszałkowska and Plac Piłsudskiego
/warsaw/saxon-garden_21137v
Opened to the public in 1727 Saski Park ranks as one of the oldest public parks in the world, and was originally designed in a ‘French style’, before being changed to follow English aesthetics in the 19th century. Originally part of the
see more

Pl. Piłsudskiego
/warsaw/smolensk-air-disaster-monument_154766v
On 10 April 2018, exactly eight years after the 2010 Smoleńsk air disaster in which 96 people died, including the then President of
see more

Tomb of the Unknown Soldier

Pl. Piłsudskiego 1-3
/warsaw/tomb-of-the-unknown-soldier_18434v
The only surviving part of the destroyed Saxon Palace. The palace was constructed during the 17th century though the tomb was not added to the complex until 1925. E
see more