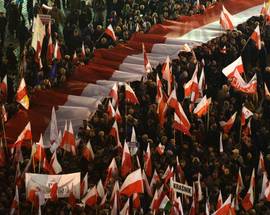 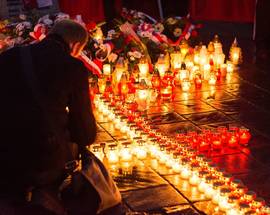 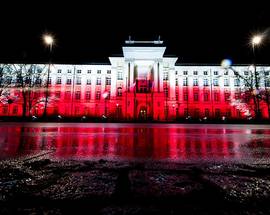 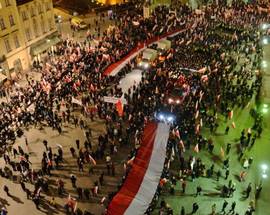 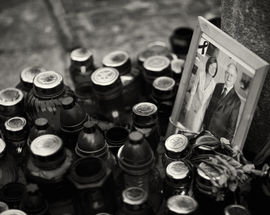 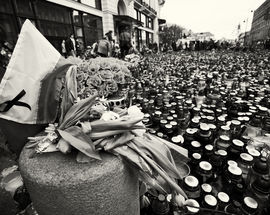 Poland hit world headlines on April 10th, 2010 when a government plane carrying President Lech Kaczyński, his wife and ninety-four other passengers crashed by the Russian city of Smoleńsk immediately killing all on board. Attempting to land at a former military airbase in heavy fog, the plane missed the runway, struck trees in its descent, flipped over and plunged to the ground in the middle of the forest. The president and his diplomatic entourage had been flying in to mark the 70th anniversary of the Katyń Massacre, a notorious episode in which Stalin ordered the execution of approximately 22,000 Polish military officers. For decades Russia had denied responsibility (blaming the Nazis instead), and only recently had official diplomatic steps been taken to mend bridges.

Surprisingly, the tragedy initially served to bring these two ancient political foes closer together, as many Poles were impressed by the sympathetic reaction of Putin's government at the time of the catastrophe. As with all high profile disasters, however, speculation as to the cause continues to be rife today. The official Russian air authority report into the incident laid the blame squarely on the pilots who they claim ignored instructions to land elsewhere because of the poor visibility and weather conditions. They also suggested the presence and distraction of unauthorised personnel in the cockpit as the key to the tragedy. At first this had been thought to have been the president himself – a man who once notoriously insisted his pilots fly against their judgement and land in war torn Tbilisi – though black box evidence now points to the intrusion at members of his entourage.

While Kaczyński had been widely forecast to lose heavily in elections due for the autumn of 2010, the episode had wider implications. Also on board were the first lady, the head of the national bank, leading politicians and the heads of the army, navy and air force; in a stroke of terrifying irony given the circumstances, Poland lost its political, military and economic elite in the crash. Despite Kaczyński’s unpopularity, the outpouring of grief was unmatched since the death of Pope John Paul II, and churches packed out as mourners paid their respects. In Warsaw, thousands lined the streets when the bodies of Mr. and Mrs. Kaczyński were returned to PL, and for the next week the streets outside the Presidential Palace were turned into a giant shrine as people converged to lay flowers and light candles – on April 17th alone, over 100,000 mourners gathered in Piłsudski Square to listen to a state service.

But even in death (/martyrdom, as it was portrayed by his party) Kaczyński remained a divisive and controversial figure. The decision to bury him in Kraków’s Wawel Cathedral, the ancient resting site of monarchs and saints, split Poles down the middle, with many protesting the decision with the slogan ‘Warsaw for Presidents, Kraków for Kings.’ Held on April 18th 2010, the funeral was marked with a service in Kraków’s St. Mary’s Basilica, before the coffins were transported with military escort to the crypt of Wawel.

Today the matter of what happened in Smolensk has not entirely been resolved in the Polish national consciousness. Though both the official Polish and Russian investigations into the crash concluded that the there were no technical problems with the aircraft and that pilot error was to blame, various conspiracy theories have circulated ever since, some of them actively promoted by senior politcal figures in PL, including the former president's twin brother Jarosław Kaczyński (and everyone in his right-wing conservative political party). A 2013 survey revealed that one-third of Poles believe that the Smolensk disaster may have been an assassination.

In 2015, following the political victory of Jarosław Kaczyński's Law & Order party (PiS), official national policy on the disaster changed to reflect that the investigation is not yet/no longer complete, and in February 2016 the matter was officially reopened. Party officials have openly accused the former government of negligence ever since the disaster, and even demanded that former Prime Minister Donald Tusk be put on trial for his handling of the catastrophe's aftermath. Relations between Poland and Russia have also been strained by what the Poles see as a total whitewash of any Russian blame in their official report. Much of the failure to conclusively determine beyond any doubt and then accept what happened in Smoleńsk in 2010 can be attributed to the fact that the Russian government is in still possession of the accident wreckage and the plane's black boxes, refusing repeated requests from the Polish government to hand over the items. The disaster which initially united political parties and international communities in grief, has ultimately proven divisive in Polish domestic politics and foreign relations between Russia and Poland, only further fuelling conspiracy theories.

In November 2016 the bodies of former President Kaczyński and his wife were controversially exhumed from the crypts at Wawel and examined to determine if they were indeed identified correctly and whether or not they displayed evidence that would lead credence to theories that there was an explosion on-board the plane. The PiS government will in fact exhume all of the victims of the disaster, despite protest from many of the families.

On 10 April 2018, eight years after the tragedy, a monument to the victims was unveiled in Warsaw's Piłsudski Square.
Wawel

Wawel 3
/warsaw/royal-crypts_58762v
While all Poland's pre-16th kings were buried beneath or within their hulking sarcophagi still on view in the Cathedral today, that trend stopped in 1533 when …
see more