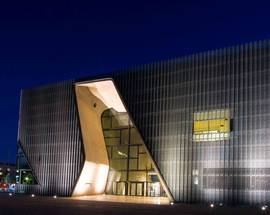 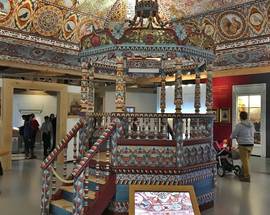 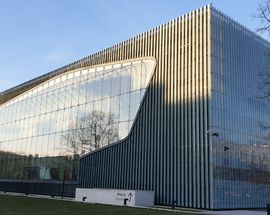 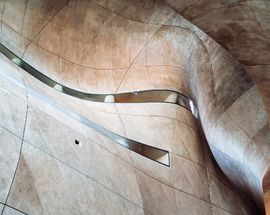 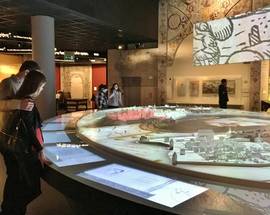 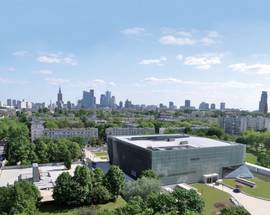 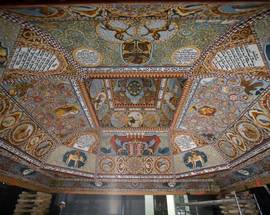 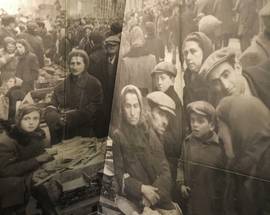 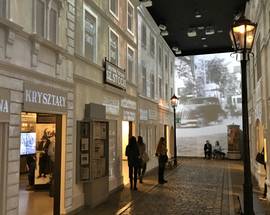 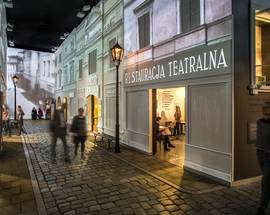 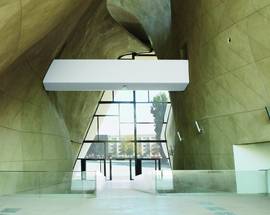 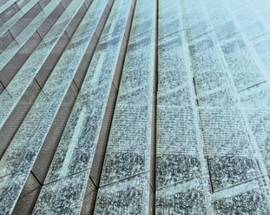 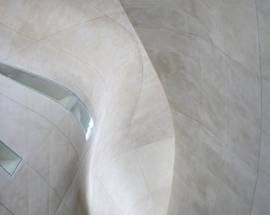 A millennium of Polish Jewish history is explained in this excellent museum which opened on 28th October, 2014 following many years of planning. The grand opening ceremony was headed by the President of Israel, Reuwen Riwlin and the then Polish President Bronisław Komorowski. In less then a year and a half POLIN won the prestigious award for European Museum of the Year in April 2016!

The idea for the museum was originally conceived in 1993 at the Jewish Historical Institute but initially struggled to attract investors for what was widely seen as just an idea. Prior to World War II Poland was home to 3.3 million Jews (one of the largest Jewish populations in the world at the time), and a third of Warsaw’s population was Jewish. The systematic annihilation of the Jews by the occupying Nazis saw more than 90 percent perish during World War II and many of the small number that survived left in the decades following the end of that war. Today just a small community remains.

Plans for the museum took a step forward in 1997, when the City of Warsaw offered an area of land in the Muranów district of Warsaw at no cost. This bold move by the city council certainly made the prospect of finding investors for the project a more attractive proposition, although a three-way agreement between the Ministry of Culture, the City of Warsaw and the Association of the Jewish Historical Institute of Poland wasn’t signed until 2005. In the end, the total amount raised for the project came to over 405 million PLN (approx. $130 million). Around $50 million USD came from foreign and local businessmen and companies (including Polish businessman Jan Kulczyk (1950-2015) who donated 20 million PLN), with the remaining $80 million pledged from Polish government funds. The resulting POLIN Museum of the History of Polish Jews is the most expensive museum/cultural venue Poland has yet seen, costing more than the extravagant and immensely popular Copernicus Science Centre.

The location of the museum is particularly relevant as the Muranów district was mainly occupied by the Jewish community in the interwar period and during World War II it became the site of the Warsaw Ghetto. After the war, housing estates were built directly onto the rubble of the ghetto, with materials being salvaged and used in the construction of new housing blocks in the area. Note the almost total absence of any pre-war buildings in the surrounding district.

The museum stands in the middle of a large, attractive square overlooking the Monument to the Ghetto Heroes which commemorates the Warsaw Ghetto Uprising of 1943. It was designed by Leon Suzin and sculpted by Nathan Rapaport in 1948. Interestingly, stone used in the monument had been brought to Warsaw by the Nazis and was to be used in architectural projects planned for a new Warsaw by Hitler's architect, Albert Speer. Close by stands an earlier memorial tablet to the Ghetto Heroes, also by Suzin, which was unveiled in 1946. In the square, you'll also find a statue of Jan Karski, a Polish resistance fighter famed for informing the allies about the existence of Nazi death camps and the systematic destruction of the Warsaw Ghetto. Don't miss out on having a wander around the square before heading into the museum.

The building itself is a stunning new copper and glass structure designed by Finnish architect Rainer Mahlamäki. It functions as both a centre for Jewish culture and as a means to educate with its centrepiece being the very impressive permanent exhibition which you will find spread over eight galleries (more than 120 international scholars were consulted to create the various historical features).

Each gallery addresses a different era in the long history of the Jewish people beginning in the forests of the Poland of King Mieszko (960-992), where legend has it that the first Jews decided to settle. Fleeing persecution from the east, Jews arrived in a forest where they heard the word Polin, which sounded like the Hebrew for ‘Rest here’. ‘Polin’ is today the Hebrew word for Poland and thus inspired the name of the museum. The exhibition goes on to chart the arrival of the first Jewish diplomats and traders through periods where Jews enjoyed social and religious freedoms and protection not bestowed upon them elsewhere in Europe to the calamitous events of the 20th century which saw the Jewish people in Poland nearly wiped out. The centrepiece of the exhibition is a remarkable reconstruction of the roof, painted ceiling and celestial canopy of a lost synagogue in Gwoździec in what was eastern Poland (now Ukraine). The hand-painted panels that you see were produced by students from eight Polish towns using traditional materials and techniques and show the signs of the zodiac and messianic animals.

Covering over 4,000 square metres, the exhibition is well laid out and includes clear English language descriptions. You can choose to visit the exhibition at your leisure, in which case we recommend taking one of the audio guides available at the ticket desk, or you can join one of the regular tours with a guide. The exhibition is truly enlightening, both about the history of the Jewish people and also that of their Christian neighbours in a country that has grown, expanded thousands of kilometres to the east, shrunk again and then disappeared completely for 123 years from the end of the 18th to the beginning of the 20th centuries. Naturally, the Holocaust is a major part of the exhibition. In particular, keep an eye out for the large reproductions of photos taken in the Ghetto by members of a Nazi propaganda unit claiming to show life continuing as normal set against excerpts from the diary of Adam Czerniaków, the chairman of the Judenrat, which are displayed alongside and give a completely different picture than the propaganda images suggest. While this tragic period is described very well and will leave you shocked regardless of your prior knowledge of the subject, do not think for a moment that this might be an exhibition dedicated to the topic. For the most part the exhibition is a celebration of a thousand years of Jewish life in the Kingdom and later Republic of Poland. Give yourself a few hours to be able to fully explore the various galleries.

The museum is also home to a canteen-style restaurant (kosher dishes available), a café and a Resource Centre that features a specialist library dedicated to the history, culture and religion of Polish Jews plus a collection of historical maps of the Second Polish Republic, including street plans. POLIN is extremely active with a rich cultural program, including temporary exhibitions, concerts, debates, films, lectures and workshops and is helping to promote a new positive dialogue in Poland.

The building is really impressive. The openning is planned for early 2014, however it launches its educational and cultural programme on the 19th of April 2013 - the 70th anniversary of the Warsaw Ghetto Uprising.
04.01.2012
Editor

Has this museum opened? This is Dec 2011.Thank you
Take your guide with you Download a pdf