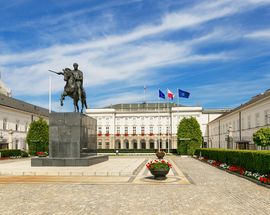 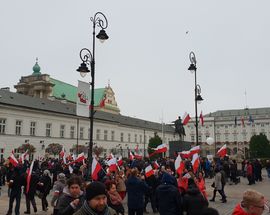 If pre-war Warsaw was considered the Paris of the East, then Krakowskie Przedmieście would have been its Champs Elysees - its importance recognised by the number of palaces, institutions, monuments and churches that line it. Of those none is more important than the Presidential Palace at number 46/48, that mysterious fenced-off building guarded by stone lions and stern-looking soldiers. Construction on it started in 1643 at the behest of Stanisław Koniecpolski, though was only completed after his death. It passed into the hands of various aristocratic families and in the 18th century became famed for its banquets - the most extravagant being held to commemorate the coronation of Stanisław II August Poniatowski in 1789; over 2 million złoty was spent entertaining the 4,000 guests.

Poniatowski proved to be one of the nation’s most controversial monarchs - and also its last. He certainly had his successes, however; the Constitution of May 3, 1791, signed on these very grounds, is recognised as Europe’s first such document, and only the second in the world. Not to be confused with the king himself, the large monument in front of the Palace is of the king's nephew, Józef Poniatowski. A Polish general, he defended Warsaw during the Kościuszko Uprising and eventually died in the service of Napoleon.

After 1818 the Palace became the seat of the Viceroy of the Polish Kingdom, and its halls entertained many a visiting Tsar. It was at this time that its residence was taken up by the eccentric Józef Zajączek - a one-legged Duke who was carried around in his armchair by a team of simpering servants.

In 1852 calamity struck and the palace was burned to the ground. Reconstructed by Alfons Kropiwnicki, the structure served as a home to the Agricultural Society, and in 1879 Jan Matejko’s epic painting ‘The Battle of Grunwald’ was put on display to an appreciative Warsaw public. Extensively remodelled throughout the course of history one of its biggest revamps came at the beginning of the 20th century when one wing was demolished to make way for the Hotel Bristol. When Poland regained its independence in 1918 it was commandeered to serve as home of the Prime Minister and his Council of Ministers. Amazingly it survived both the 1939 Siege of Warsaw and the Warsaw Uprising five years later, though that did little to stop the authorities employing Antoni Brusche and Antoni Jawornicki to give it a further facelift. It saw more momentous events in 1955, this time when the Warsaw Pact - the Soviet Union’s answer to NATO - was ratified within its walls. Since 1994 it has served as the official home of the Polish president, which is exactly why you’ll find streams of limos heading in and out, and square-jawed soldiers pointing their weapons at anyone who strays too close. Polish President Andrzej Duda, elected in spring 2015 and re-elected in 2020, currently resides in the Palace with his family.

ul. Krakowskie Przedmieście 68
/warsaw/the-presidential-cross_71061v
Who would have thought two planks of wood could cause so much trouble? A story that dominated the news here for much of summer 2010 concerned an improvised cross put up outside the Presidential Palace by scouts following the death of Preside
see more