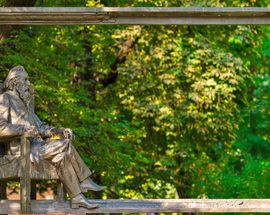 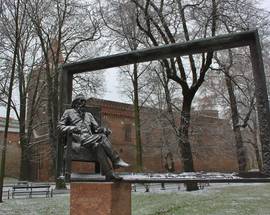 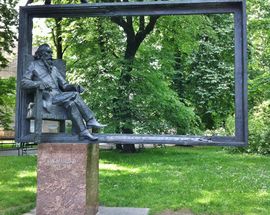 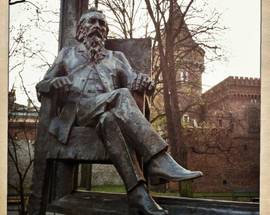 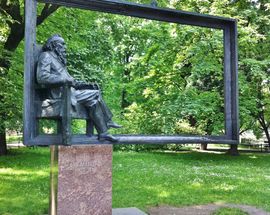 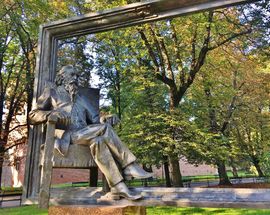 Unveiled in November 2013, this monument pays homage to one of Poland's greatest painters, and one of Kraków's most beloved sons: Jan Matejko (1838-1893). 2013 was not only the 175th anniversary of Matejko's birth in Kraków, but also the 120th anniversary of his death here. Famous for his epic and outsized historical paintings, which have been reproduced enough to become imprinted within the national psyche, Matejko's work can be seen throughout Kraków from the Czartoryski Museum to the 19th Century Polish Art Gallery in the Cloth Hall, to the monumental polychrome he did inside St. Mary's Basilica in his final years. Educated in Kraków and later principal of the Academy of Fine Arts, Matejko also trained an entire generation of great Polish painters, including Wyspiański, Mehoffer and Malczewski. This impressive monument, which depicts the artist seated within a large picture-frame, is the work of Jan Tutaj, and located beside the Barbican along what was Matejko's daily walk from his home to the Fine Arts Academy which now bears his name on nearby Plac Matejki (also named in his honour). To learn more about Matejko, visit his home and museum at ul. Floriańska 41; die-hards can also visit his manor house in Nowa Huta.

ul. Basztowa
/krakow/barbican_57336v
The showpiece of the city's medieval defences, the Barbican was built at the end of the 15th century to protect Kraków's main entrance and was connected to the Floria
see more

ul. Floriańska 41
/krakow/jan-matejko-house_17099v
Jan Matejko was Poland's greatest historical painter whose work and life is honoured in the house where he was born, lived and would eventually die in the 1890s. As well as some witty imaginings of Kraków medieval life, studies for gargoyles, and coll
see more

/krakow/planty_60717v
Once the site of the city’s 13th century defensive fortifications, the moats were filled, the walls razed and the towers demolished - with the notable exceptions of the grand
see more

25.01.2023
Shuggie
Krakow
I wonder what the artist who created the monument thinks of its placement. It's a great concept with the artist seated in front of an empty frame, which could potentially allow passersby to create interesting photos inside the monument's frame. Except it's placed facing an empty part of the Planty, where nothing is really inside that frame except trees and leaves; it would be better if there was some iconic building (which Krakow has plenty of) or scene in the background. It is also placed on a tall pedestal so that people can't insert themselves in the work. Seems like a missed opportunity and I wonder if the artist feels the same.
Take your guide with you Download a pdf