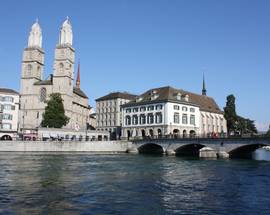 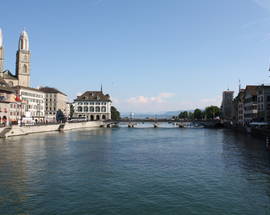 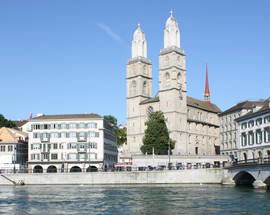 The two towers of the originally Romanesque Grossmünster are Zurich’s landmark and they also offer a great view over Zurich, if you make it up the 187 narrow steps (5/2Sfr admission for the tower, open 10:00 - 17:30 (16:30 in winter), Sun 12:30 - 17:30 (16:30 in winter)). According to legend, Felix and Regula, Zurich’s patron saints, were beheaded at the site of the Wasserkirche and then walked up to where the Grossmünster stands, taking their heads with them. Centuries later the emperor Charlemagne was passing through Zurich and decided to found a church in honour of the martyrs - after a hint from his horse. Since the Reformation the church has a barren feel, alleviated only by the windows. German artist Sigmar Polke finished 12 simply beautiful windows in 2009, partly made of semi-precious stones. Crypt and cloister with a museum on the Reformation are also accessible. Audioguide in different languages available (5Sfr plus 5Sfr deposit).