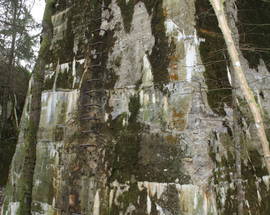 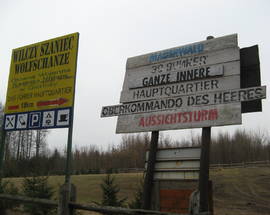 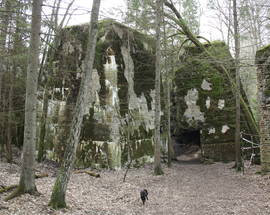 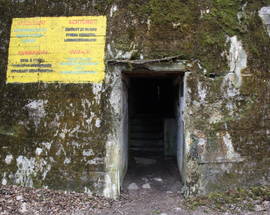 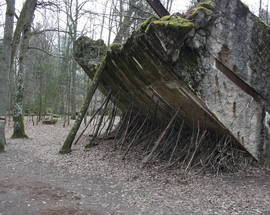 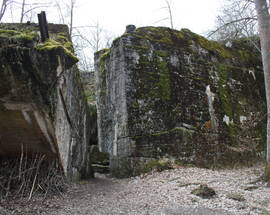 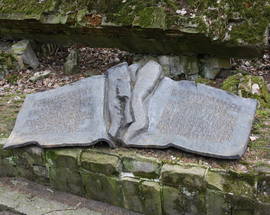 The 1939 Ribbentrop-Molotov Pact saw Poland carved up between Germany and the Soviet Union, yet even this failed to satisfy Hitler’s growing megalomania. His core ideology demanded further expansion eastwards and hence it was in the summer of 1940 construction of an eastern HQ was initiated. The forests of what was then the Eastern Prussian region of Gorlitz (today Polish Gierłoż) were identified as ideal for this end; lakes and swamps surrounded the proposed site, while the nearby Boyen fortress lent added protection from capture. Over the following 12 months Organization Todt sealed the area off and set about constructing what the locals of Rastenburg (today Kętrzyn) thought to be a chemical works. In reality a series of wooden barracks were erected, as well as string of concrete bunkers up to three metres in thickness. Camouflage netting of Bakelite leaves were hung over forest clearings to confuse aerial reconnaissance and the area was heavily fortified with mines and fences. Finally, with Operation Barbarossa two days away, Hitler arrived abroad his private train on June 24, 1941.

The planned blitzkrieg against the Russians stalled at the gates of Moscow, and when it became apparent the Soviet Union would not crumble so easily the decision was taken to fortify the Wolf’s Lair further. Existing wooden barracks were encased in concrete half a metre in thickness, and more structures sprung up around them. Yet even this was deemed ineffectual, and on Hitler’s orders a final phase of construction was undertaken between February and October of 1944 – this saw bunkers built on top of bunkers, as well as the addition of a thirteen metre tall bunker for Hermann Goring.

To all intents and purposes the Wolf’s Lair became a world within world, complete with two airfields, railway station, central heating, power generators, sewage system, sauna, casino and even a cinema – though it’s unknown if Hitler ever used it to watch the complete set of Mickey Mouse films allegedly gifted to him by Goebbels. Over 2,000 people worked there, including a detachment of 1,500 guards, and in spite of the confidentiality surrounding the complex it soon became an open secret amongst the locals that this was Hitler’s base; one anecdote tells how Hitler received local children on his birthday, entertaining the budding young fascists with biscuits and Fanta. In fact, it’s probable the secret spread and that the Allies knew of the location of Wolf’s Lair by late 1943 – why they didn’t bomb it remains a source of hot debate amongst historians. Some claim Western spies must have been working at the base, others that the Allies wanted nothing but Germany’s complete and unconditional surrender; killing Hitler would have forced peace negotiations and scuppered the chances of this.

Despite the comprehensive facilities, life at Wolf’s Lair was tough, with General Jodl concluding it was ‘half monastery, half concentration camp’. The nearby swamplands – one just a hundred metres from Hitler’s bunker – meant the complex’s residents were constantly plagued by mosquitoes, and period photographs show guards resorting to wearing ridiculous bee-keeper style hats to stave off this menace. In the words of historian Heinrich Hoffman, ‘the army – in an attempt to kill all the mosquitoes – poured oil on the lakes, thus destroying all the frogs with the insects. Hitler was upset because he enjoyed hearing the frogs croak as he fell asleep, so more had to be brought in for this purpose’.

If Hitler was upset about the frog palaver, then one can only imagine his reaction to the plot to assassinate him. On July 20, 1944, Claus von Stuaffenberg undertook the mission to kill the Führer by leaving a time bomb in the situation room. Hitler’s anticipated death would then see Operation Valkyrie come into effect, a coup that would overthrow the Nazi hierarchy and force peace negotiations. As we know, however, the assassination attempt failed. Stauffenberg, in spite of being equipped with two bombs, only set one – possibly because his dastardly preparations were interrupted. The conference he was to attend was originally to be held in Hitler’s bunker, though this was switched at the last moment to the lightly reinforced bunker number three. Unperturbed Stauffenberg placed the bomb under a heavy oak table close to Hitler, before making his exit on the premise of a phone call. It’s known the briefcase containing the bomb was moved slightly, and when it detonated Hitler was saved by a table leg which bore the brunt of the blast. Had Stauffenberg used both bombs as originally intended then there can be no doubt, Hitler would have been killed outright. The switch of venue cannot also be underestimated – in a heavier bunker the explosion would have been fearsome, but in the light bunker number three the open windows provided an immediate outlet for gases. Stauffenberg was executed later that night, and in the purge that followed over five thousand more plotters were rounded up and killed, their deaths recorded on film for Hitler’s pleasure.

(You can read a BBC interview with von Stauffenburg's son from 2014 here).

And so the poisoned Austrian remained in power, and the war rumbled on towards its bitter conclusion. With the Soviet Union poised for their decisive offensive Hitler finally took leave of his HQ on November 20, 1944. His favourite yes-man, Field Marshal Keitel, immediately ordered Operation Inselsprung into effect; the complete destruction of the Wolf’s Lair complex. Tonnes of explosives were brought in from Fort Boyen, though in the event the demolition charges were only detonated on January 24, 1945, just three days before the Russian’s rolled in. Approximately eight tonnes of TNT were used in each bunker, with the ensuing blasts sending thick slabs of concrete flying through the air like scattered dominoes.
Sightseeing

Gierłoż
/gdansk/wilcze-gniazdo_134283v
For the full immersion experience sleep in a former SS barracks right on-site. Lodgings are spartan, but each room comes with ensuite facilities and a price …
see more
Sightseeing

Wilczy Szaniec (Wolfsschanze), Gierłoż.
/gdansk/sztabowoz_146178v
There are remains beyond the camp perimeter which you can visit although some are a few thousand metres from the main camp. One way you can take a look at …
see more
Sightseeing

Wilczy Szaniec (Wolfsschanze), Gierłoż.
/gdansk/jadwiga-korowaj_146179v
It's well worth hiring the services of one of the authorised guides. You'll usually find them on the camp but it is advisable to call ahead to book to save …
see more