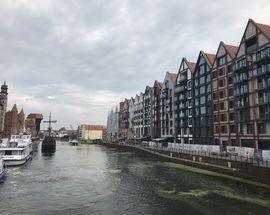 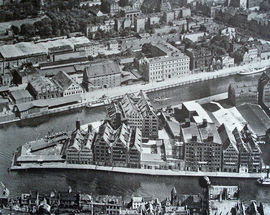 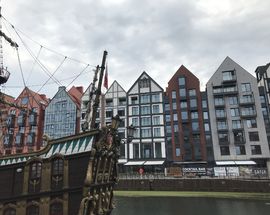 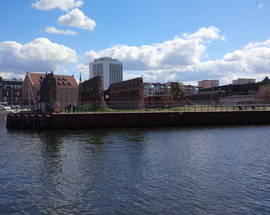 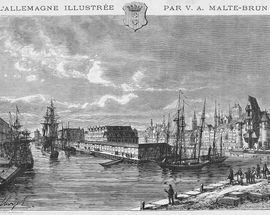 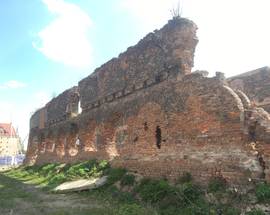 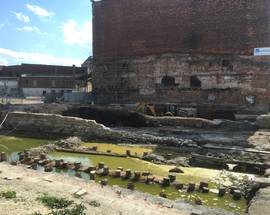 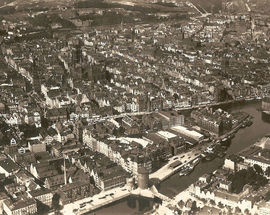 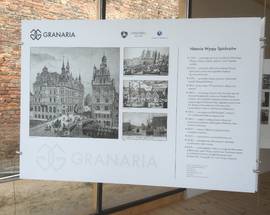 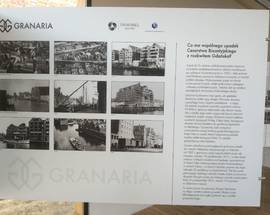 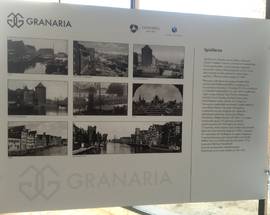 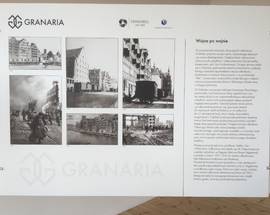 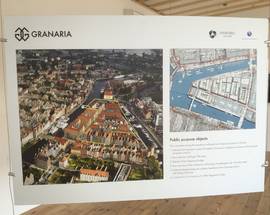 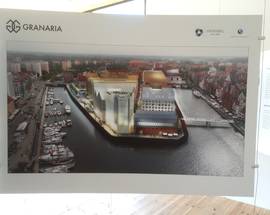 One of the most visible recent changes to this ever-changing city can be seen right in the heart of the old town where, following decades of decay, Granary Island (Polish: Spichlerze / German: Spicherstetten) is being brought back into public use, thanks to a series of huge construction projects. 2019 is currently seeing the next phase of the development opened to the public.

First a bit of background: Granary Island was the centre of Danzig/Gdańsk trade for centuries and a major source of the city’s historic wealth. The first building to be established on the island was a slaughterhouse in the first half of the 14th century, close to the junction between ul. Chmielna and Podwale Przedmiejskie and these were joined over the next century by buildings such as Ash Manor (Polish: Dwór Popielny / German: Aschhof) and Tar Manor (Polish: Dwór Smolny / German: Teerhof). Carpentry workshops, timber yards and quality control points for products such as hops, flax, hemp and tar grew up on the island as business developed.

In the early 16th century, increased exposure to attacks and fire saw the construction of earth and wooden fortifications on the eastern side. These defences were supplemented by dog patrols, earning them the name Dog Ramparts (Polish: Psi Wał) and were located near what is today ul. Motławska.

The New Motława canal was built in 1576, which separated the area from the mainland, making it an actual island for the first time. By 1643, there were 315 granaries on the island capable of storing up to 250,000 tons of grain and servicing over 200 ships, which helped make Gdańsk the largest harbour on the Baltic and one of Europe’s richest cities.

Some of the granaries had their own names with such colourful titles as Deo Gloria and Bear Dance. Some of these names lasted longer than the buildings themselves as, by the 19th century, warehousing had replaced some of these granaries, however, the historic names were kept on.
The island was virtually destroyed during WWII, with just three of the buildings surviving. Of these three, Steffen, Deo Gloria and Wisłoujście, a building which had originally been called Blue Lamb (Polish: Błękitny Baranek) and had been dated as far back as 1776. Most of the island remained a skeletal set of brick remains, although various developments have so far seen 36 restored.

For years, plans to restore the ruined granaries repeatedly stalled. Finally, plans were accepted to develop the area and, as work progressed, the area has since been converted into a 180-room hotel, 560 apartments, underground parking, restaurants, retail outlets, offices and a square. The development will also see new bridges built, including one linking the waterfront opposite close to the Crane.

Those who remember the skeletal remains of the granaries, which stood largely untouched for 70 years following World War II, may remember a single, towering brick granary, which was one of the few buildings on the island to survive relatively intact. That was the Deo Gloria and the neglect of the intervening years left it looking as a surviving broken tooth on the derelict island. It was difficult to imagine that it was even a survivor of the pre-war island, such was its utilitarian appearance but it appears a chequered history was probably the reason it survived.

Granaries bearing the name Soli Deo Gloria (English: Glory to God Alone) can be traced to the 17th century, but the building you see today was built in 1930 following a huge fire, which claimed the life of one of the many Danzig firemen fighting it. The construction of the more sturdy and fire-resilient Deo and Gloria granaries in the 1930s is probably the reason they survived enough to be salvaged in the years following the war.

They now find themselves with new neighbours and the beautifully-renovated building serves as the centrepiece of the Słony Spichlerz (English: Salty Granary) development. Słony Spichlerz is now a 'restaurant market' and offers a wide choice of cuisines in the first food hall concept to be created in the city. The building has food available throughout the day, beginning with breakfast and serving lunch, dinner and late-night meals until a new day begins! It is just one of many commercial ventures that have revived this still-beloved area of Gdańsk.
Show on map

ul. Stągiewna 26, Gdańsk
/gdansk/puro-gdansk_135826v
The PURO brand have taken Poland by storm in recent years with the development of smart, modern, well priced and well-located new hotels. The experience begins with the relative novelty of self-check-in, though fear not there are also staff on-hand to he
see more