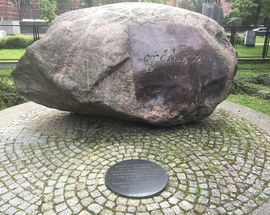 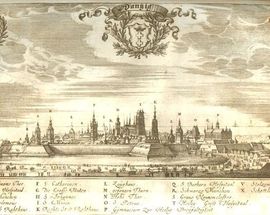 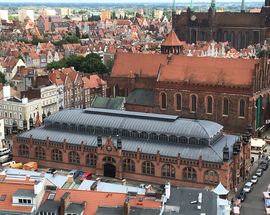 Anybody vaguely acquainted with history, or indeed heavy metal, will be familiar with the name of Danzig. What you may not know is that Danzig and Gdańsk are one and the same. The Polish name, Gdańsk is actually the real McCoy, meaning ‘town located on the Gdania river’ although the earliest recorded inscription of the name is as gdydanzyc from 1000. The name Danzig came into usage during the 1300s after the city fell under the influence of the Germanic Teutonic Knights. Danzig came firmly under German control in 1772 when Poland was partitioned by Prussian for the first time and then in 1871 as part of Germany where it would remain until the end of WWI.

After the war the majority of the towns inhabitants remained German, though the city fell under the jurisdiction of the League of Nations who baptized it ‘The Free City of Danzig’. This quasi state functioned until Hitler decided to seize it in the named of the fatherland, thus triggering WWII. The aftermath of the war saw much of the German population exiled westwards, and the city repopulated with Poles, themselves shifted west following the expansion of the Soviet Union. The city was renamed Gdańsk, and a program of heavy propaganda in the 1950s and 60s all but eradicated what remained of the towns German heritage. Today Gdańsk is a popular holiday spot with Germans keen to trace their roots, and you can still spot signs with German lettering in areas like Biskupia Góra.

As a tourist much of your time will be spent in the centre. Gdańsk old town exposes a fractured history torn between Poland and Germany. Re-built following total devastation during WWII it rates as one of the most stunning old towns of Central Europe. Reminiscent of Amsterdam the main street, ul. Dluga, is lined with Burgher houses, while the cobbled streets which shoot off it are a minefield of amber stores and bars. Framing the old town is the Motława River, historically the source of the city's wealth, and a perfect evening walk.

Two other areas of note for the visitor: Firstly Wrzeszcz, which was home to Gdańsk’s playboy community up until WWII, as well as being author Gunter Grass’s former stamping ground. Communism saw the decadent houses and villas fall into disrepair though the area has now shown signs of full recovery, and has since established itself as the commercial heart of the city. Some of best malls in town are found here, and the growing number of students has seen a bar and club boom. If you’re in Gdańsk for more than a couple of days you owe it to yourself to spend an afternoon exploring the side streets.

Bridging the gap between Sopot and Gdańsk you’ll find the picturesque suburb of Oliwa. Oliwa wasn’t incorporated into Gdansk until the 1920s, as a direct result of the Mayor making numerous unwise investments. The area retains its own distinct ambience, and walking by the dilapidated store fronts on the main high street is to take a step back in time. The detached villas allude to the area's wealthy past, and this is still very much considered one of the best parts of the city. With regards sightseeing don’t pass up the opportunity to visit the cathedral, the nearby park or the zoo, or do as the locals do and hunt for bargains at the market.

Gdansk through the ages

ul. Długi Targ 25/27
EDITOR'S PICK
/gdansk/free-city-of-danzig-historical-zone_54460v
Found tucked away in the shadow of the Green Gate, what looks like little more than a three minute diversion transpires to be a fascinating insight into the …
see more
Editor's pick
Monuments

Park Akademicki, Gdańsk Wrzeszcz
/gdansk/gyddanyzc-monument_151000v
This large boulder set in the park close to the entrance of the impressive Gdansk Polytechnic building, pays tribute to the oldest known mention of the …
see more