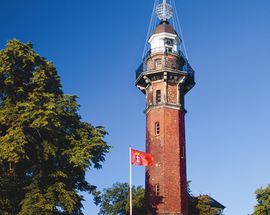 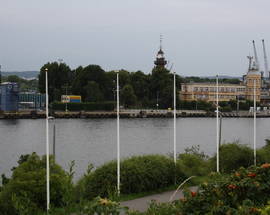 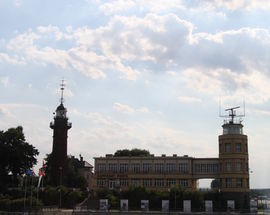 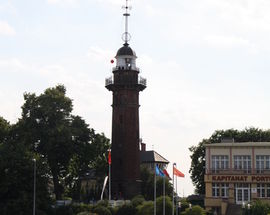 A fascinating delve into Gdańsk‘s maritime history, the city‘s Nowy Port Lighthouse was inspired by a long-lost lighthouse built in 1871 in Cleveland, Ohio, in the USA. This one in front of you was built in 1893, the 28-metre tower functioned as a lighthouse, harbour pilot’s tower and time-ball station until it was finally decommissioned in 1984. Its principal claim to fame is its use by German soldiers in September 1939, and it was from the upper floors that a machine gun emplacement fired the very first shots of WWII. Painstakingly restored by an amiable Polish-Canuck the centrepiece of the lighthouse is a time ball, unveiled on May 21, 2008. During its former life it was synchronised to the Royal Astronomical Observatory in Berlin but today it takes its signal from Physikalisch-Technische Bundesanstalt (PTB) in Braunschweig which is broadcast as a DCF77 long-wave radio signal by the European Time Centre in Mainflingen, Germany. Time-balls were originally designed to allow ships’ captains out at sea to synchronise their on-board clocks exactly before they headed back out, the dropping of the ball being the signal to mark the hour - this would allow them to calculate longitude resulting in more accurate navigation.

To get to Nowy Port Lighthouse, you can take Tram No. 2 from the Gdańsk Główny to Reja (7th stop) and switch to Tram No. 5 in the direction of Latarnia Morska (Lighthouse).