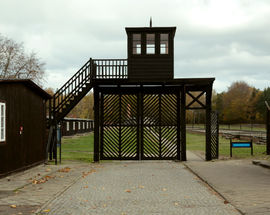 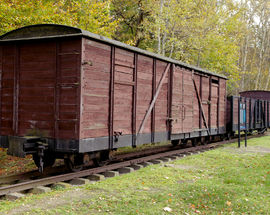 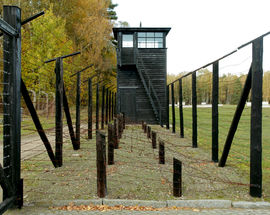 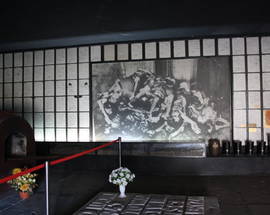 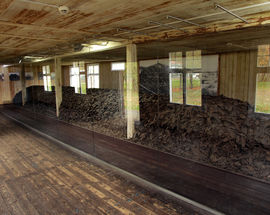 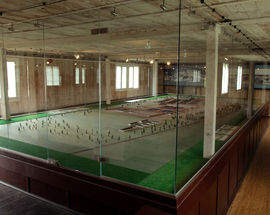 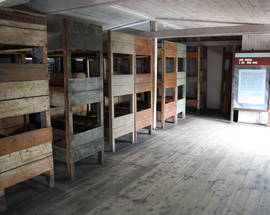 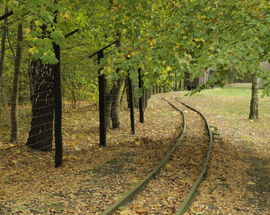 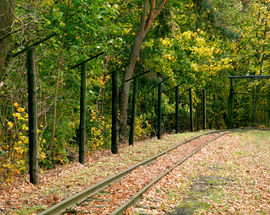 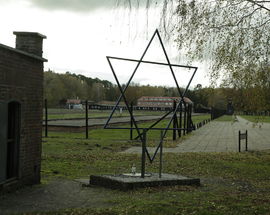 Stutthof Museum is a recommended visit for anyone who wishes to learn more about the 20th-century history of Gdańsk, WWII and the effects this had on the local population. It is an easy day trip from Gdańsk, being less than an hour drive from the city and with buses going regularly to the site. Covering around 20% of the former camp area, Stutthof Museum has undergone a significant program of modernisation.
NOTE: It is advised that children under 13 should not visit.

I've been to Auschwitz. Why should I go to Stutthof?

While the holocaust is certainly not a pleasant topic, the cruelty and somewhat-bizarreness of the Nazi regime is intriguing to many. Some of you may have been to Kraków and have visited Auchwitz, the largest and most notorious Nazi death camp in Europe. For that reason alone, you may say to yourself 'Why should I go to Stutthof?'
The answer is that Stutthof is unique in many ways...

Stutthof was the first death camp established outside of Nazi Germany and the last to be discovered.
Whilst other operations, like Auchwitz, were quite large and locals were certainly aware of their existence, Stutthof was secluded and a well-kept secret from those living in nearby villages. The peaceful, tidily-kept camp of Stutthof set among the trees and just a couple of kilometres from the beach, has a different atmosphere but an equally lasting effect. The advancing Soviets liberated the camp on 9th May 1945, the day after Germany officially surrendered.

Stutthof was one of the most diverse Nazi death camps.
Registered prisoners included citizens of 28 countries. Aside Jews and Poles, there were Germans, Czechs, Dutch, Belgians, French, Norwegians, Finns, Danes, Lithuanians,Latvians, Belarusians, Russians and others. These demographics is the result of it's location on the Baltic. Among 110,000 prisoners were Jews from all over Europe, members of the Polish underground, Polish civilians deported from Warsaw during the Warsaw Uprising, Lithuanian and Latvian intelligentsia, Latvian resistance fighters, psychiatric patients and Soviet prisoners of war.

Some mudered prisoners of Stutthof were turned into soap.
The Nazis were known for some bizarre scientific experiments on camp prisoners, most notably those of Auchwitz's 'Angel Of Death', Dr. Josef Mengele. For years, there was an existing myth that the Nazis had mass-produced soap that produced from human body fat. While there is no evidence to show 'mass-production', there is evidence of a small-scale experimental of this very process, conducted by the Gdańsk-based Nazi Dr. Rudolf Spanner, and he used human corpses obtained from the Stutthof death camp.

For more of a background on this site, read our feature on A Brief History of Stutthof Death Camp!

What to See at Stutthof?

The museum is easy to walk around and while not everything comes with English language descriptions, there are enough boards and explanations dotted around the site to allow you to understand how Stutthof concentration camp came about and what happened here. You will enter the area of the museum by crossing over the narrow gauge railway line that runs around the camp. To your right where you’ll see first the villa where the camp commandant and his family lived and then a smaller building which was home to the camp’s guard dogs. You’ll see one of the many boards outside which describe points of interest in three languages - Polish, German and English. This particular board points out that the purebred German Shepherds housed here weighed more than some of the starving inmates they were trained to guard.


Your first point of call on arrival at the main gate to the camp should be to the information point and shop to the left as you enter the gate. Housed in the former SS Guardhouse, the friendly people here can furnish you with guidebooks in a number of languages as well as hook you up with tour guides. In the years after the war Stutthof was allowed to fall into disrepair, many of its buildings falling prey to both the elements and looters. Following the end of the war, the building existed for over a decade as a tourist hotel, while the former DAW Armaments Factory passed into state hands. The decision to turn Stutthof into a museum was only reached in 1961, and what you see today is the result of years of research and restoration.

While the camp is free to enter, there is a 5zł option to watch a 20-minute documentary film in the Kommandatur building at the front, which you’ll next see on your right, was once the administrative heart of the concentration camp. The video covers the Soviet investigation into the camp, detailing everyday life for prisoners and guards as well as the proceeding trial that is encompassed in a Polish newsreel from 1946. Although the video is a little dated and obviously ripped from a VHS copy, it is a good way to be orientated before entering the camp. Screenings are shown every half hour during the season (from 09:30 - 16:30 until the end of September); although in off-season these take place whenever there is a minimum of four people waiting to see it. The Kommandatur also hosts temporary exhibitions of inmate art as well as the archive and book of remembrance (which is on display variously depending on exhibits).
Having left the admin building, the scale of atrocities hits home on entering the first proper exhibit housed in what was once the Political Department: thousands of shoes confiscated from prisoners lie piled up in dusty stacks. Next door in this single storey hut which was home to the Gestapo are a series of shrines to the Polish priests who were among the first rounded-up and executed following the Nazi takeover of Danzig.

It’s after this visitors pass through what was once referred to as ‘the death gate’ - the main entrance through which tens of thousands entered the camp. Directly to the right a barracks tells the wartime history of both the camp and the regime. The outbreak of the war is covered in specific detail, with accompanying photos and mugshots of the first arrests and Nazi murders, while further on other sections deal with the camps construction and the SS crews employed within; Himmler’s visit is given particular attention.
Just how fast Stutthof increased in size is illustrated next, as well as individual stories of heroism and escape; only Włodzimierz Steyer is recognised as having successfully fled, testament enough to the camp's reputation as being escape-proof. A huge scale model, hidden behind glass, demonstrates the size of the challenge prisoners would have faced while planning such break-outs.

From here visitors cross the grass to reach the barracks that formerly housed the women’s block showing prisoner transports, striped uniforms and photographs of gaunt-looking prisoners. Most poignant of all, a host of personal items are also on display. These include rings crafted illegally by prisoners, dolls and pictures drawn by children - lollipop trees et al. One barrack is stacked solid with original triple-tier bunks, while others are home to a brutal looking operating theatre as well as a slab on which prisoners would lie before being given a fatal injection of phenol. The sight of clunky-looking syringes repulses the body. As the war lengthened the killing process was streamlined, and next on your tour is a brick gas chamber used to execute anything up to a hundred prisoners at a time. A Star of David and Catholic cross outside recognises the beliefs of those who died, while to the right is a gloomy crematorium used to burn corpses. Three original ovens have been preserved, and these are flanked by memorial notices, candles and floral tributes. Walk through further chambers outlining the Nazis’ murderous methods, as well as rooms dedicated to the death marches and the Nazi trials that followed after. An original gallows stands outside, as well as cattle trucks used to transport men and women from across occupied Europe and, as the war progressed, to act as mobile gas chambers.
As you loop around to the area of the ‘new camp’ your route takes you past an epic memorial that dominates the skyline. Known as the Monument to Fight and Freedom, and designed by Wiktor Tolkin, it was unveiled on May 9, 1968, the 23rd anniversary of the camp's liberation.

Forming a part of this landmark obelisk is a horizontally-shaped reliquary containing the human ashes and bone fragments recovered from the soil in the excavations that followed in the years after liberation. Remembrance services are held here on the first Saturday of September to mark the creation of the camp.

Much of Stutthof was razed to the ground as the Nazis sought to hide traces of their crimes, and as such the area known as ‘new camp’ now has 21 concrete blocks placed in the area where the barracks once were, as well as a Star of David marking what was once the Jewish area of the camp. Walking across this wind-blasted field allows plenty of opportunity for reflection, though don’t think your visit has ended. Around 500 metres into the forest to the north of the perimeter is what is referred to as ‘the Holocaust stake’. Prior to the construction of the gas chamber it’s here that thousands of Jews were herded before being executed by firing squads, their bodies then burned on funeral pyres. A ring of symbolic stones marks the edge of the pit.

The town of Sztutowo (Polish name for 'Stutthof') lies 55km east of Gdańsk and is easily accessed by both car and bus. Journey time by bus is about 80 minutes and costs 14.50zł. From Gdańsk bus station, board the number 870 bus marked either 'Sztutowo' or 'Krynica Morska' from Platform 2 (Note that the service varies on its final destination but both go past the museum). They leave every hour in the high season and much less-frequently during Autumn and Winter. Remember to take cash as these are 20th century buses that missed the technological advent of EFTPOS! After 80 minutes, keep an eye out for the perimeter of the camp on your left side. Get off at this stop!!

Remember to take note of the last bus heading back to Gdańsk, which varies from 20:15 or 21:15.  The return bus stop is on the opposite side of the road, and another 100m towards the town.

If you have a car and plan on driving there, take road number 7 before turning left just after crossing the Wisła (in the direction of Mikoszewo). Once in Mikoszewo follow signs to Krynica Morska. You’ll find Sztutowo on the way. Total distance - 55km.
Museums

ul. Muzealna 6, Sztutowo
/gdansk/stutthof-death-camp-museum_32038v
Stutthof Museum is a recommended visit for anyone who wishes to learn more about the 20th-century history of Gdańsk,
see more
Places of Interest

/gdansk/biskupia-gorka_16200v
A walk along ul. Biskupia into the Biskupia Góra district (Stolzenberg in German) is a brief but poignant trip to Danzig's pre-war past. Cobblestones and …
see more
Cemeteries

ul. Bolesława Chrobrego 80, Gdańsk
/gdansk/Zaspa-Cemetery_123192v
This small cemetery is the chief burial place for those murdered by the Nazis during WWII either in police detention or in the early years of the Stutthof …
see more