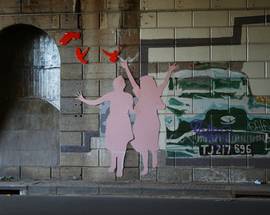 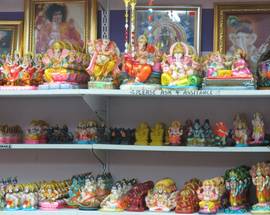 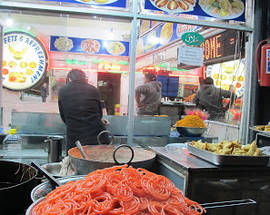 While Indian Joburg is not restricted to Fordsburg, the neighbourhood is its distinct pulse. Rich in history and bearing the scars of its past with pride, Fordsburg today is a collision of bold colour, spicy streets, enticing flavours and bargains galore. It was once part of the farm on which gold was first discovered, and for years attempts were made to regulate the area into a whites-only district. A strong spirit of activism prevented this.

Key historical moments include the shelling of Fordsburg during the 1922 miners‘ strike, when white miners rose in armed opposition to the government’s employment of cheap black labour; the forced removals of communities to Indian-only Lenasia; and the destruction of a vibrant multicultural community in the adjoining Pageview, then known as Fietas. Because of the predominantly Muslim population most restaurants do not serve alcohol and shops are closed on Friday during prayer times.

What began as a tragic incident in the mid-1970s, with the forced removal of Indian traders from 14th Street in Pageview (then nicknamed Joburg’s ‘Petticoat Lane’), has become a thriving shopping centre with 360 stores that is the heart of Fordsburg today. Fabrics, haberdashery, bridal outfits and accessories and thousands of pairs of shoes are just some of the items that draw droves of people to the Oriental Plaza each month from all over South Africa and neighbouring countries. Silk flowers, jewellery, brassware, children’s toys and an extraordinary range of sari fabrics are also on offer, along with fabrics that match any specification. Shops offer tailoring services on-site, and will make up curtains or other household items. The Golden Peacock is a plaza staple and your samoosa stop.
38-60 Bree St, Fordsburg, www.orientalplaza.co.za

‘The Subway: Fordsburg & Fietas, Sisters in History’ is a monumental work along Subway Road. Bronwyn Lace, Reg Pakari and Rookeya Gardee spent more than a year researching this area with people from the dispersed communities of Fietas and Fordsburg. Almost 32 community events were held to gather the information and design elements to make up this mural commemorating community life before the forced removals legislated by the apartheid government’s Group Areas Act in the 1970s.

On August 16, 1908, Mohandas Gandhi led 3 000 supporters – among them Muslims, Hindus and Christians – to Hamidia Mosque, in Fordsburg, where they burned their ‘pass’ documents. These were the identity documents that all people classified ‘non-white’ by the government of the day were forced to carry in order to travel across the city, or face being imprisoned. The bonfire was lit in a cauldron and this event was the first recorded burning of pass documents in South Africa, an action that would later be emulated by the anti-apartheid resistance movement. It was also the beginning of Satyagraha, the passive resistance campaign Gandhi formulated. In 2007 artist Usha Seejarim, commissioned by the Sunday Times Heritage Project, marked the spot with a sculpture of a potjie (a three-legged cast-iron pot) beneath which is placed a wheel, that when spun produces an image of a pass document burning.
Jennings St, next to Hamidia Mosque.

One of the first collective artists’ studios in the city, a visit will take you into their artistic process. Resident artists include internationally acclaimed Alexandra-born artist and cultural activist David Koloane and renowned painter and installation artist Kagiso Pat Mautloa, whose works draw inspiration from the city streets beyond the studio. The studio also holds exhibitions and workshops for established artists.
10 Mahlatini St, Fordsburg, +27 11 834 9181, www.bagfactoryart.org.za. Call for an appointment.
Gandhi's Joburg

Jennings Street, Fordsburg
/johannesburg/hamidia-mosque-mohandas-mahatma-gandhi-sculpture_128417v
On August 16, 1908, Mohandas Gandhi led 3 000 supporters – among them Muslims, Hindus and Christians – to Hamidia Mosque, in Fordsburg, where they burned their …
see more
Malls

28 Mint Rd, Fordsburg
/johannesburg/al-makka_123460v
For spicy curries try this cheap and cheerful alcohol-free spot on a Fordsburg corner. It's also likely to stay open later than most. The menu is a mix of …
see more
Patisseries