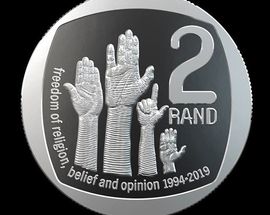 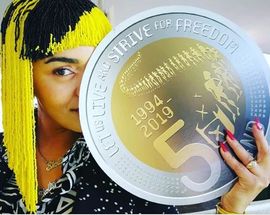 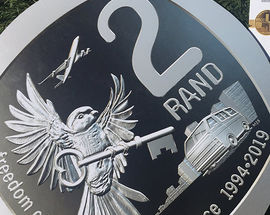 This year South Africa celebrates 25 years of democracy and to mark the occasion the South African Mint has collaborated with five South African artists to design a new collection of coins that celebrate the fundamental human rights enshrined in the constitution. The five new coins are each designed by local artists and have been minted and sent into circulation throughout the South African autumn and winter. Here's a look at the full collectable SA25 coin series. 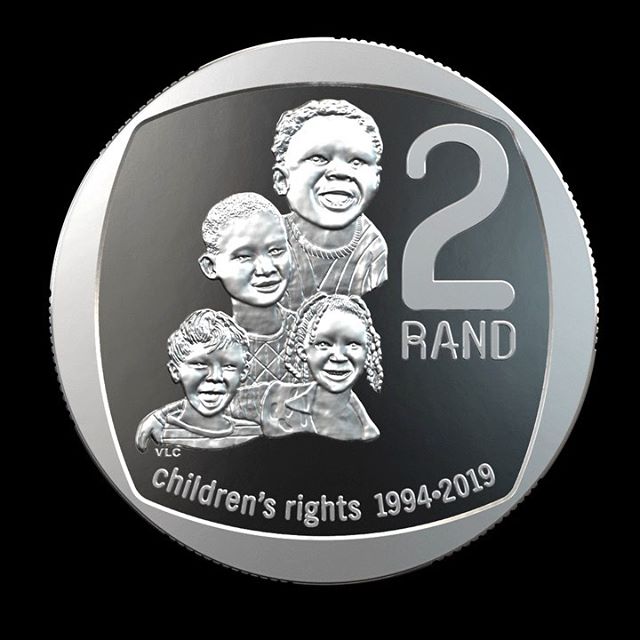 Launched in Youth Month (June), this coin stands for the human rights children are guaranteed under the consitution such as physical protection, food, education, healthcare and equal protection of their civil rights. Mahlangu says with this coin she wanted to display the joy of children and engender a sense of nostalgia in adults.

The Right to Education R2 coin designed by Neo Mahlangu 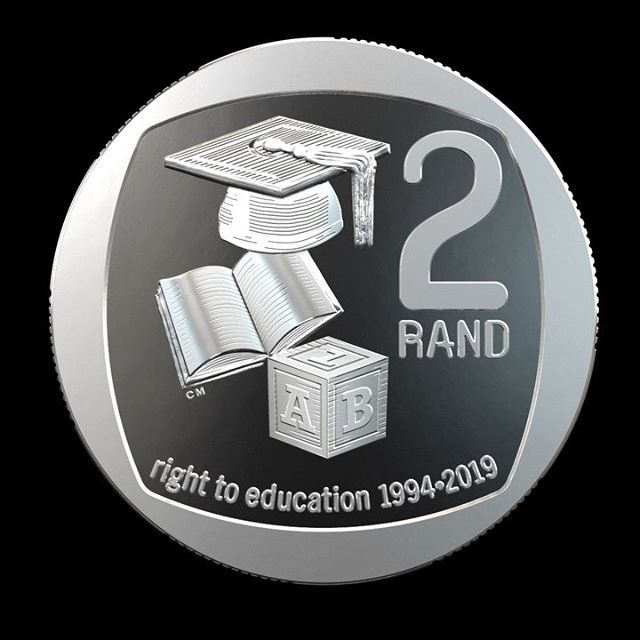 Mahlangu's R2 coin, also launched in June, represents the Constitution's commitment to providing equal access to education for all. The coin design reflects the on-going pursuit of education from pre-school right up through the tertiary level 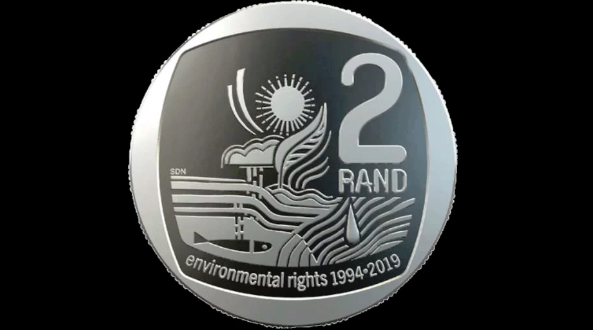 Graphic designer and artist Maaike Bakker simplified and distilled integral elements of the South African landscape for her R2 coin that honours the environmental rights of access to natural resources, including the water, food and clean air that are essential for life. Particularly concerned with the protection and preservation of our environment, Bakker hopes to remind people of the importance of preserving the majestic environment in which we live.

Freedom of movement and residence R2 coin by Rasty Knayles 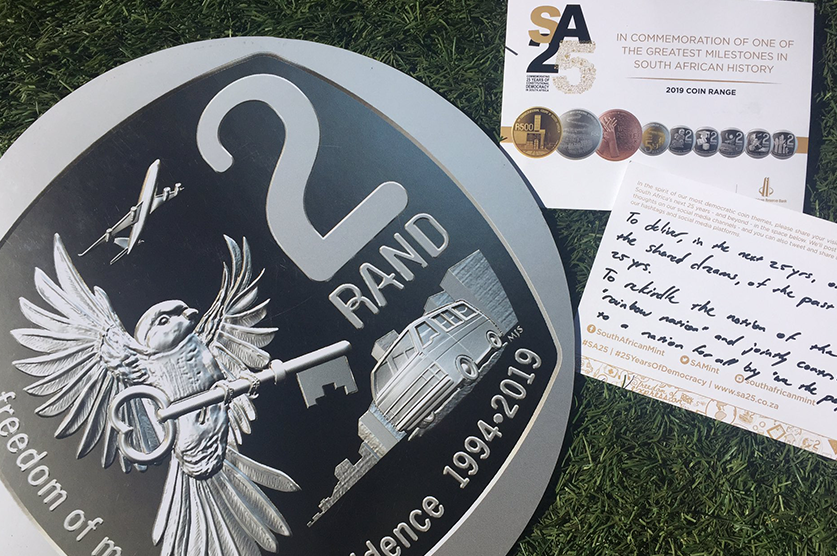 Graffiti artist Rasty Knayles has paid tribute to the right of freedom of movement and residence that South Africans have now enjoyed for 25 years. During the apartheid era, one of the most enduring and arbitrarily cruel restrictions inflicted by the state was enforced segregation of the races and the requirement that black, Indian and so-called coloured South Africans be required to carry a 'passbook' at all times which stated where they could and could not work or live. Knayles says that working on the coin has been his "most significant and challenging work" to date. The coin features one of South Africa's ubiquitous mini-bus taxis and an aeroplane indicating the possibility to move around South Africa and abroad as one pleases and a bird carrying a key representing freedom. 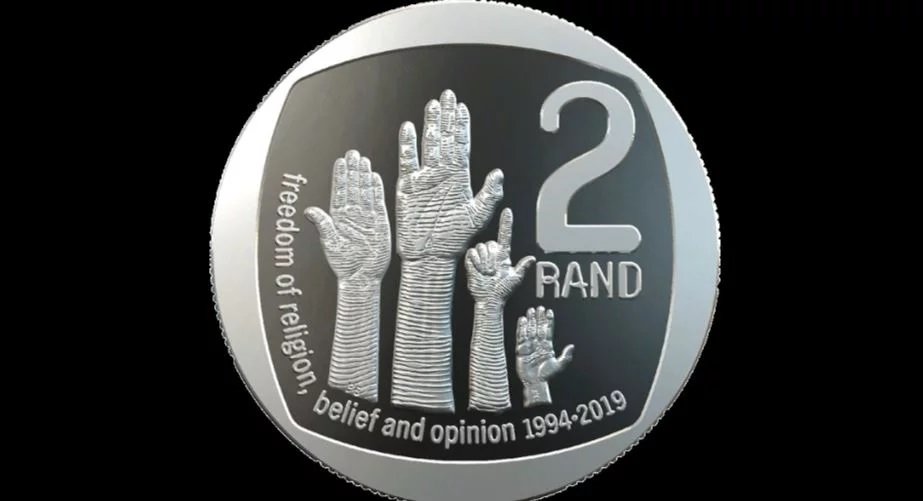 The right to choose, change or practice one’s beliefs and opinions in South Africa, is an extraordinary liberty worth celebrating. In his coin Peter Mammes has taken the sign language symbol for religion (raised hands) as a motif. The hands do not convey any particular gender, colour or age and speak to the sense of unity and freedom enshrined in the constitution and to the constitutional right of each South African to follow their own creed and religion.

Let us live and strive for freedom, R5 coin by Lady Skollie 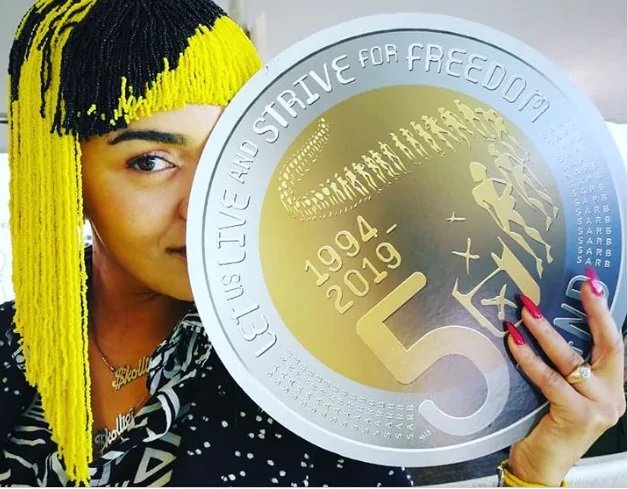 This R5 coin designed by contemporary art rock star Lady Skollie is marked with the line from the South African national anthem ‘ Let us Live and Strive for Freedom’ and the design on the coin's face is inspired by the long snaking queues that were seen at the first democratic election in 1994 with a stylisation that pays homage to ancient San rock art.

Look out for the new coins in your change and pay a visit to Coin World, the SA Mint Museum in Midrand to see how the coins themselves are made. At the SA Mint you can also buy the full range of limited edition collectable SA25 coins which include a commemorative R500 pure gold coin designed by Shaun Gaylard and engraved with the silhouette of the Constitutional Court building in Joburg.