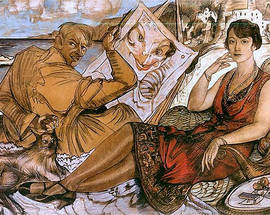 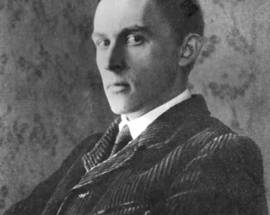 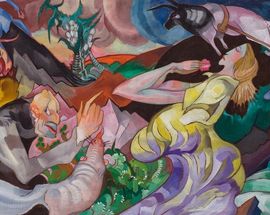 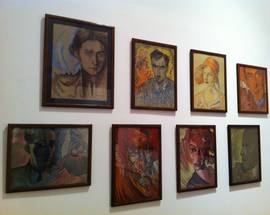 Eccentric, flamboyant and tragic, Stanisław Ignacy Witkiewicz - remembered as ‘Witkacy’ (1885-1939) – was one of Poland’s premier avant-garde icons. A prolific playwright, painter and photographer, the Warsaw-born, Zakopane-reared weirdo was at the forefront of Polish abstract art. The mysterious suicide of his fiance in 1914 (whom he was accused of butchering) compelled him to seek solace in Australasia where he became involved in scientific expeditions. On hearing of the outbreak of WWI he returned to Poland and served with distinction against the Germans before being wounded and continuing his descent into the depression that was to dominate his life.

As he plunged into heavy spells of morphine, cocaine and peyote abuse his paintings became all the more inspired. Twisted portraits of his high-society friends (heads springing from penises, beastly animal shapes flying in the background) became his trademark. He experimented with all forms of modern art, started his own theatre company in Zakopane (an hour south of Kraków) and expanded on his philosophical theories.

A rabid anti-communist, Witkacy was hell-bent on proving that an individual’s aims would always be different from that of society and state. When the Red Army crossed into Poland on September 17, 1939, sensing the end of civilisation, Witkacy took a suicidal dosage of drugs, ending his life the next day. Originally buried in a far-flung corner of the Ukraine, Witkacy’s body was returned to Zakopane in 1988. But in a scene that wouldn’t have been amiss in one of his satires, it eventually emerged that bungling officials had buried the wrong corpse – the subject at the centre of the excellent Polish film ‘Mystyfikacja’ (available with English subtitles). Visitors to Kraków can see a large collection Witkacy’s wacked-out paintings on the top floor of the National Museum.

Al. 3 Maja 1
featured
/krakow/national-museum-main-building_17104v
The National Museum has 11 branches in Kraków, with this monolithic structure - apparently built over the course of half a century from 1935 to 1989 - being …
see more
Featured