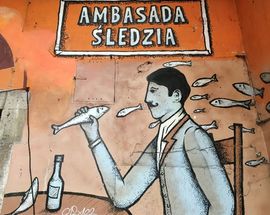 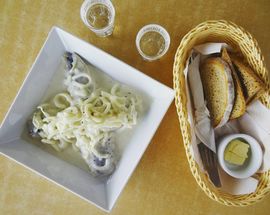 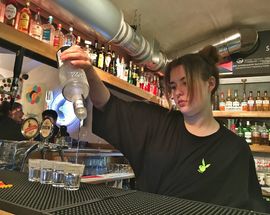 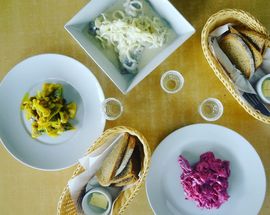 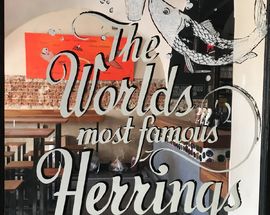 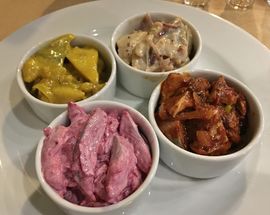 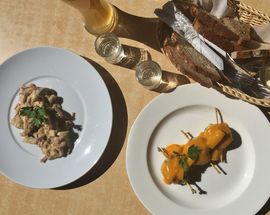 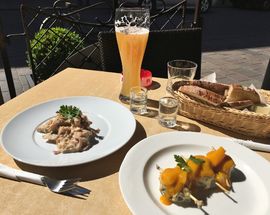 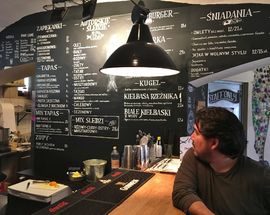 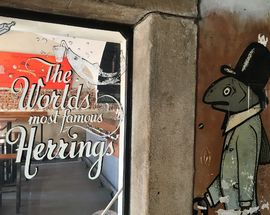 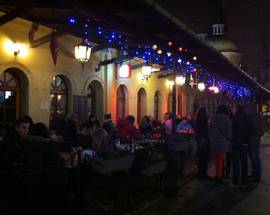 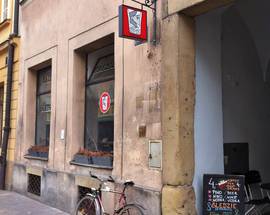 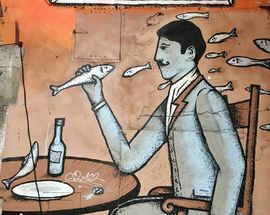 ul. Stolarska 5
/krakow/sledz-u-fryzjera_152745v
There's no shortage of vodka and śledź bars in this town, but this offshoot of Ambasada Śledzia is our fave, particularly when it comes to food. The pickled herring (śledź, 10zł) i
see more

ul. Stolarska
/krakow/ul-stolarska_149986v
Stolarska is one of the oldest streets in the Old Town. It’s old name, platea fratrum Praedicatorum, came from the Dominican church and convent at its south end, befo
see more

06.05.2019
Rambo
Krakow
The food in this place just keeps getting better! We had a veritable feast the other day. All the sledz was delicious and the ribs were simply amazing - was not expecting them to be so good! Give it a go!
21.08.2011
Adam

well that's actually pretty funny as i'm spending quite a lot of time in ambasada and it's most of the time almost full. coppers are there because of american consulate. there is usually two of them.as i'm a bartender myself i spend lots of time in bars (i like to call it occupational disease haha). also cause i spend 4 years in uk and have a lot of great memories and hell lot of friends out there so i enjoy looking after tourist back in my motherland. i been in every new open 24h 4zl place in krakow. ones in city centre and ones in kazimierz. and have to say i would not recommend any of my friends to any other place than ambasada. i would tell them to go and check them out but not stay there too long. why?-great food. they do have a proper good chef there and it's just tasty. (you can get some nice stuff in other places tho it's just like comparing take away to restaurant)-it is open 24 7 no matter what. there been few times just at the beginning where they been shut. but it was months ago. -good service. owners spending lots of time in bar trying to make sure everything is fine. (lots of krakow famous people spending time in ambasada such as mr. swietlicki poet and singer) it's also get great opinions from local newspapers about food and atmosphere. -it's a only 24 7 place with NO PICK POCKETS!!! no fights as seen outside other places. no bullshit. no problems. you can sit and enjoy your drink and don't have to worry!-only one problem at night is a fact you can't get loud cause of neighbors. you can sit outside chat have a laugh but can't sing 'drunk loud and proud'.hope you guys gonna enjoy your visit in krakow. there is lots of great bars in krakow might see each other in one of them.
20.08.2011
Skrzęcior

Quite ridicolus note; this place is full of people. Normally you can meet near US Consulate 2-4 policemans So do not pay attention that the author can't and visit Ambasada &#346;ledzia ))
20.08.2011
Lukasz

As a frequent client I assure you Ambasada IS open 24 hours a day. As I live in Kazimierz it's a perfect spot for me to drop by on my way home from the city centre no matter if it's 11 pm. or 4 am.In fact Ambasada was the first place of this kind in Kraków and unlike Banialuka or Pijalnia Wódki i Piwa they really pay attention to the quality of food they serve. The herring (prepared in three different ways with some additional seasonal variations) is simply delicious the best I've had in Kraków (and only for 8 PLN) and there's no better way to cure hangover than with kwa&#347;nica (a soup of sauerkraut). Definitely one of my favourite places in town.
20.08.2011
Aga

Actually they have the best herrings in Krakow so if you wish to taste real polish food there is no better place.
20.08.2011
Aida

I think youre completly wrong. Herring Embassy is a wonderful place opened 24 7 NO EXEPTIONS and serving really good food &amp; vodka. I advise you to go there first and check propely before writing a harmful review.
20.08.2011
Darek Darkowski

I go there usually with my CouchSurfing guests as this place is very friendly to people from abroad and we can tell each other jokes about the policemans in front of USA embassy. I usually stay at the place until a very late morning since my friends live at Stolarska Street and they often pass by. And as far as I remember it was never closed - fully 24 7. By days it's usually full of people in the late night there are also guests with who you can talk about pretty much everything because everyone seem to be good old friends. Like Dekafencja it's one of the best places to enjoy late night hours and welcome a lovely morning in Krakow. Even if the owners are from Warsaw ;) it's a great addition to our local pub's map.
20.08.2011
Paul

What do You mean it's not 24 7? Almost every weekend I start-or-end party in this "club" and I've never seen it closed. Also police is not a big deal bigger problem is to find there free chair in the evening ))) cheers!
20.08.2011
karol

got impression you never been there. It's the most hip place in Cracow hangout place with the best herrings in Cracow. They have plenty of tapas - little polish dishes - sour cucumbers smoked ribs cabbage pork jelly. It is always open - what does it mean "in Poland that does not guarantee its accuracy"???? I think you have never been in Poland.and btw-more police than tourists?? There are only two guys guarding US consulate opposite and the bar is always full.maybe there is less tourists cause it isn't touristic place its place for us for locals!
Take your guide with you Download a pdf