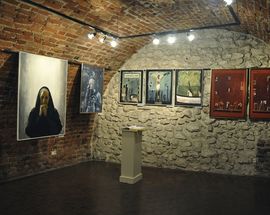 Pope John Paul II lived here, twice. Once as fledgling priest Karol Wojtyła, and later in grander, adjacent rooms as Bishop of Kraków. Today a museum, inside you'll see everyday objects and artefacts from the Pope's time here, as well as gifts he later received as Pope, exhibited in the very rooms he once lived in; plus lots of sacral art, and temporary exhibits. All very nice, and certainly the most accessible museum about the Pope in Kraków, but this one should probably be reserved for true papal enthusiasts. A second branch of the Archdiocesan Museum is located at the John Paul II Centre in Łagiewniki, while a third - the Wojtyła Apartment at ul. Tyniecka 10 - shows the apartment where the future pope lived with his father in the late 1930s (free admission).

ul. Totus Tuus 30, Łagiewniki
/krakow/museum-of-st-john-paul-ii_130025v
The main attraction of the JPII Centre in Łagiewniki, this museum displays a large collection of items primarily donated to the museum by
see more

ul. Kanonicza
/krakow/ul-kanonicza_19949v
Kraków's most picturesque street, and an essential part of any tourist itinerary. The cobbled alley is lined with superb examples of Renaissance and Baroque architecture, and many of the facades feature colourful murals and passageways leading to quie
see more

ul. Tyniecka 10
/krakow/wojtyla-apartment_132474v
Located in the seldom visited district of Dębniki, this is the small, modest apartment where Karol Wojtyła moved with
see more