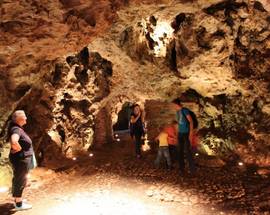 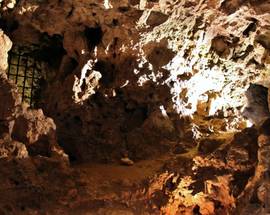 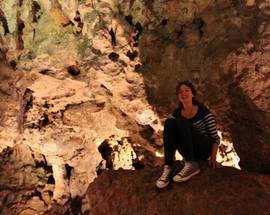 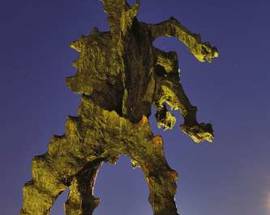 Formed about 25 million years ago, the spectacular limestone formation of Wawel Hill is not the solid piece of rock it appears to be, but rather filled with eerie caves and crawl spaces. As legend would have it, the craggy chambers beneath Wawel were once home to Smok Wawelski, or the Wawel Dragon, a particularly nasty creature who liked nothing more than to gorge himself on sheep and local maidens. Story goes that as the village ran out of virgins, the King promised the hand of his only daughter to the hero who could vanquish the vile beast. Wave upon wave of brave knights fell beneath the dragon's fiery breath before a poor cobbler named Krak tricked Smok into eating a sheep stuffed full of sulphur, which instantly ignited inside his gullet. With an unquenchable thirst the dragon went and drank half the river before his distended belly exploded and the town was freed of his wrath. Krak married the princess, of course, became king, built his castle on the dragon's lair and the people built a city around it named 'Kraków' after their saviour king.

Smok's bones were hung triumphantly outside the entrance of the Cathedral, where they remain today. His cave became a famous tavern and brothel during medieval times and today functions as a seasonal tourist trap luring families into its dripping, less than awe-inspiring confines from April 23rd until the end of October. Save this for last since the route through the caves leads you down a descending staircase (not handicap/baby stroller accessible) inside the castle courtyard to be later deposited outside the complex on the riverbank below, right in front of Smok's sculpted bronze likeness unveiled in 1972 to a design by the local artist Bronisław Chromy. It was once possible to send Smok an SMS which would send him into temporary raptures of fire-breathing bliss, however he now does it without checking his phone first, so just be patient and don't look down his throat.

Admission 9/7zł. Tickets are purchased from a machine outside the entrance (note that it only takes coins and doesn't give change!), or from the Wawel Visitor Centre.