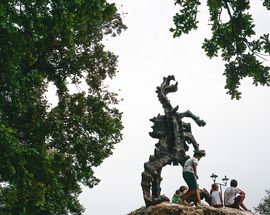 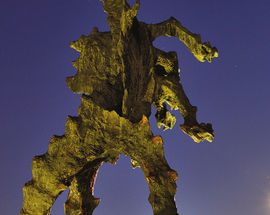 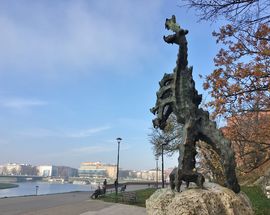 Standing on the Wisła riverbank in the shade of Wawel Castle is a rather ugly likeness of the Wawel Dragon (Smok Wawelski), who - according to local legend - once reposed in the large cave behind him when not out and about in town scarfing up virgins and sheep. As every Polish schoolchild knows, the dragon was finally vanquished when he was tricked into eating a bag of sulphur, and subsequently exploded. This monument in his honour was unveiled in 1972 to a design by local artist Bronisław Chromy, and its most redeeming feature is that it intermittently blows fire out of its maw. Extremely popular with the kids you'll find climbing all over it, it was actually once necessary to send Smok an SMS in order to send him into fits of fire-breathing bliss, however now he does it without checking his phone first, so just be patient and don't look down his throat.

Outside the entrance of Wawel Cathedral, you may also notice an odd collection of massive bones chained up on the left outside the entrance. While legend obviously purports these to be the bones of Wawel’s fearsome dragon, more conventional wisdom has claimed they might be parts belonging to a blue whale, woolly mammoth, rhinoceros, or all three. At any rate, they haven’t been removed and inspected for centuries due to their magical properties, which are credited with protecting the city from destruction during centuries of Polish partition and particularly during WWII when almost every other major city in Poland got pancaked.

Wawel Hill
featured
/krakow/dragons-den_72224v
Formed about 25 million years ago, the spectacular limestone formation of Wawel Hill is not the solid piece of rock it appears to be, but rather filled with eerie caves and
see more
Featured

ul. Krańcowa 4, Park Decjusza
/krakow/bronislaw-chromy-sculpture-gallery_156697v
Located inside and all around the funky communist-era band shell of Park Decjusza, this is the personal atelier of local sculptor and artist Bronisław Chromy, who sa
see more

17.10.2018
Pete
Madison, WI
That's cool that it breathes fire, but as a fan of dragons, I have to say this is not my favorite artistic interpretation of one. Crudely sculpted, it is visually chaotic - six arms with little heads on them? It also seems to have no relation to the actual legend of the Wawel Dragon, which was a more conventional-looking beast, not this artistic acid trip. I hope Kraków gets an awesome dragon sculpture some day like the ones in Ljubljana.
Take your guide with you Download a pdf