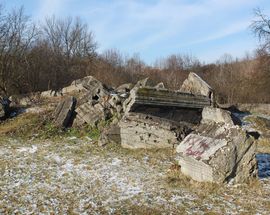 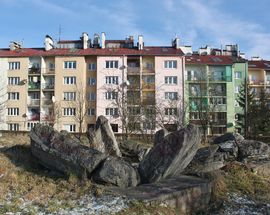 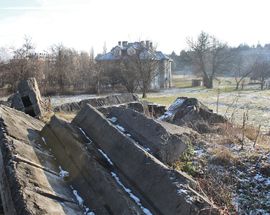 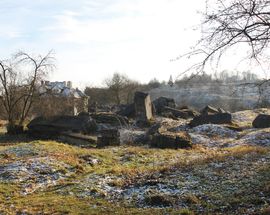 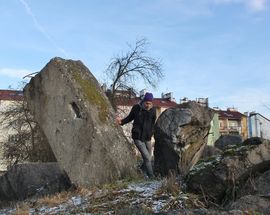 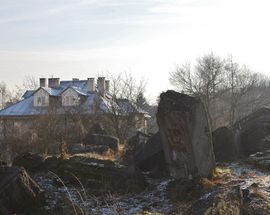 Just past the Guardhouse and SS Officers' Club on the right side of the road is a footpath directly into the camp along what was once the dividing line between two Jewish cemeteries that existed here before the war. Immediately visible is an extensive pile of grey rubble - the remains of the Old Podgórze Jewish Cemetery's magnificent pre-burial hall. Built between 1920 and 1932 in Byzantine style, this monumental building featured a 25-metre main dome with smaller side domes, and was the pride of the local Jewish community. Inside were mortuaries, rooms for cleaning and preparing bodies, prayer rooms and rooms for funeral ceremonies. From the start the Germans used it as stables for horses, cows and pigs, essentially destroying the grandeur of the building. When found to be obstinately standing in the path of the train tracks the Germans wanted to extend into the centre of the camp, the building was demolished with flair in several stages, for the amusement of SS officials, local authorities and other guests of Camp Commandant Amon Goeth, who made a public spectacle of the whole thing.

ul. Jerozolimska 25
/krakow/former-jewish-cemetery-grounds_152789v
One of the main areas of recent restoration work in the camp has been that of the two pre-war Jewish cemeteries located here: The Old Cemetery of the Podgórze Jewish Community with its monumental
see more