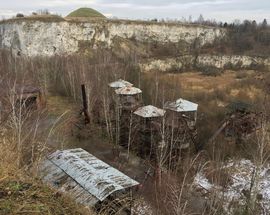 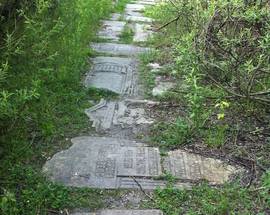 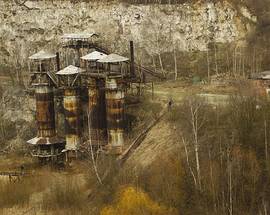 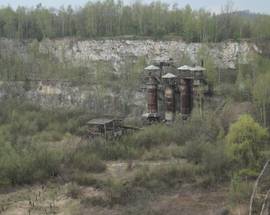 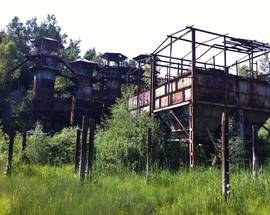 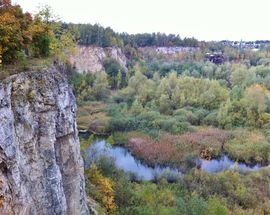 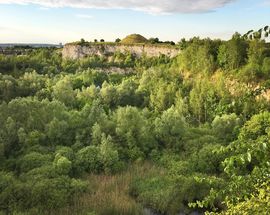 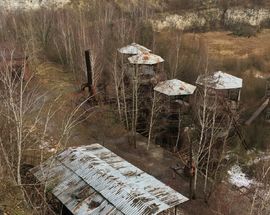 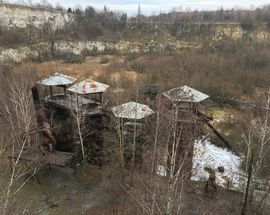 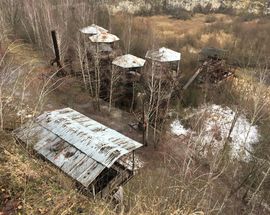 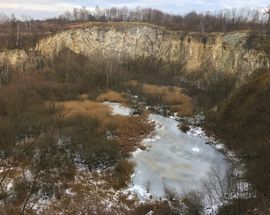 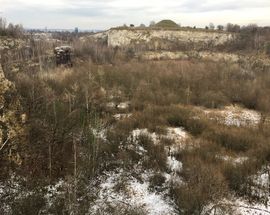 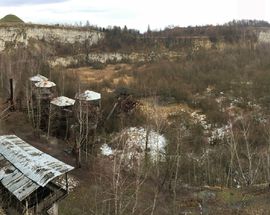 One of the creepiest, most forgotten places in Kraków, the Liban Quarry should first and foremost be a place of remembrance for the victims of the Nazi labour camp that operated here during Kraków's WWII occupation. That said, the site lies in overgrown abandon today, slowly becoming a nature sanctuary for waterfowl, birds of prey, pheasants and other various creatures (we've even seen an unattended horse grazing). Incredible limestone cliffs, ponds and dense vegetation are as breath-taking as the rusting refinery equipment, fence posts, gravestones and tangles of barbed wire (be careful!) that can still be found amongst the brush here.

The limestone company 'Liban and Ehrenpreis,' run by two well-known Jewish industrial families from Podgórze, established a quarry here in 1873. By the end of the 19th century a complex of buildings was established within the quarry and a railway line laid as the families enjoyed an excellent reputation locally and abroad. However, during Nazi occupation, Liban was set-up as a cruel penal camp where 800 young Poles were kept prisoner from 1942 to 1944 performing forced labour. A small, discreet and currently inaccessible memorial for 21 inmates executed during the liquidation of the camp lies beyond the fence towards the ul. Za Torem end of the site.

In 1993 Steven Spielberg used Liban as the set of all the scenes from Schindler's List that take place in the Płaszów concentration camp. Not wanting to use the nearby site of the camp itself out of respect, it must have taken little imagination on his part to settle upon Liban. During filming 34 barracks and watchtowers were set-up around the quarry, and though most of the set was subsequently removed, some traces remain confusingly mixed with the genuine historical leftovers from the war, making it unclear just how uncomfortable you should feel as you walk amongst the rusty machinery and many gallows-like fence posts - some still strung with barbed wire. Certainly, the most disturbing site is the central pathway paved with Jewish headstones, which we can put you at ease by assuring you is not genuine. An incredibly evocative, yet peaceful and beautiful site, Liban allows you to explore Kraków's World War II history on your own terms, interpreting it as you like without the hand-holding of history books or tourist bureaus. Enter the quarry at your own risk by following a trail from behind Krakus Mound toward Podgórze Cemetery, along the rim of and then down into the quarry. Enjoy the wild nature of this site while you can because from the middle of 2020 there are plans to begin developing it into a recreational park to open at the end of 2021.
Show on map

20.04.2019
TS
KR
I really wish they won't tamper with the place. "Proper recreational area" smells a lot like paved paths and outdoor lighting, clearing the woods and ruining the whole place. SUre, there's plenty of garbage and glas and stuff people like to throw into nature in Poland, and I agree it should be removed. But hacking at the place to make it more visitor friendly is a ghastly idea. The animals will leave, the reptiles lose their habitat and the silent, eerie atmosphere wil disappear into a yet another sterile and boring park.
15.09.2016
Lesley
Uk
Having visited the quarry twice now I can say it is very easy to enter. From the small road that leads up to the top of the Plaszow site, you can either park at the top where you see the ww2 buildings and walk to the edge of the quarry continue right and walk down. Or continue to drive along the small road past the ww2 buildings continue round as you reach the bottom you see a small path through the trees if you follow the path it leads to the quarry you are still a way up and need to walk down from the old structures that stand. It is possible and have not been approached by any hostility. I would recommend entering from the bottom rather than climbing down from the top. There are also a couple of large buildings at the far back of the camp from the ww2 building area continue through the trees you will find an d building surrounded by bee hives. If you are lucky the owner arrives to tend the bees and he will show you around. On the entrance there are Jewish roll call numbers inscribed on the walls. Enjoy x
27.02.2013
David Schneider

The last sentence of this text gives a pretty good clue on how to enter the quarry "Enter the quarry at your own risk by following a trail from Krak's Mound toward Podgórze cemetery along the rim of and into the quarry or try your luck from ul. Za Torem; though there is nothing unlawful about being in the quarry city employees of the Housing Office buildings at the quarry's entrance have been known to aggravatedly deny entry or ask people to leave."As stated there are two entrances one official (ul. Za Torem) one unofficial (a hiking trail); we would recommend taking the unofficial route as the public is not welcome to wander around the municipal buildings that occupy the section of the quarry along ul. Za Torem side and the gate operators cannot be expected to speak English or be sympathetic to visitors. Basically if you want to visit Liban the best way to begin is by climbing to the top of Kopiec Krakusa (Krakus Mound). From there you will have excellent views of the quarry and a better idea of how to enter from the opposite side. A foot-worn walking trail leads from the south-side of the mound towards Podgórze Cemetery (away from the city centre). At the corner of the cemetery you may easily pass through Liban's perimeter fence as the trail continues between the cemetery's fence and the edge of the quarry. It should be obvious that you are doing this at your own risk; if you stay on the trail you will be far from danger however the nearby edge of the quarry rim is unstable and should not be climbed on. Not much more than 100 metres from the mound when you have reached the far end of quarry there is another trail to your right which leads down sharply into the quarry. It is very easy to find and safe to descend. Once inside you can explore the ruins of old refinery equipment again at your own risk being mindful that these structures are unsafe and watching out for the barbed wire which is rather prolific around the site. We also ask that you respect the sensitive historic nature of this site. In summer time the grass is very tall and as crazy as it sounds it can be easy to become disoriented or lost inside if you wander too far. The way you entered is also the way you should exit keeping as much distance from the municipal buildings as you can.If you continue to follow the original trail along the rim of the quarry away from the mound you will discover some abandoned barracks buildings from WWII and eventually arrive at the former site of the P&#322;aszów concentration camp (now a large field with several monuments and trails). All told it is not a long walk at all from the mound so enjoy exploring the area and be safe.
02.09.2011
Josh

Hello. Can someone fill me in on where to enter the quarry and the best route to take walking around once inside. Thank You!
28.01.2011
Prue Francis

I have now roamed around Liban quarry in both the summer and winter when I have visited Krakow. After reading this website I had to find this place and it has become my favourite spot. It is truly creepy but incredible to walk about I cant recommend it more to people. Not to many people working in hostels actually know about it so don't bother asking just go yourself its not to hard to find
24.02.2010
Katie Johnson

I found this extremely informative and i thank you very much for answering the question that i had concerning whether that road did in fact exist or if it was a movie prop. I am extremly interested in that subject and try to find all the information about it that i can.
Take your guide with you Download a pdf