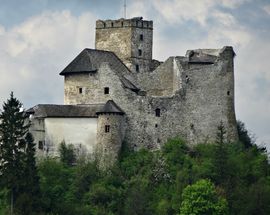 About 2.5 hours drive from Kraków, Niedzica Castle (also known as Dunajec Zamek) was built by the Hungarians between 1320-1326 as part of several fortifications along the Dunajec River. It was vital in Polish-Hungarian relations as a border fortification during the war against the Ottoman Empire in the 15th century and the castle has exchanged hands between Poland and Hungary all the way up until 1943. With the borders as they currently sit, it is less than 2km from the Czech Republic! Beautifully-positioned above Lake Czorsztynskie, this rather photogenic attraction has appeared on many book covers and was one of two Polish locations where Netflix's The Witcher was shot. Indeed, visitors often remark that the courtyard and towers bear a remarkable with Bran Castle in Romania where the legendary Vlad Dracul AKA Dracula once resided.

Niedzica has a rather gothic legend of its own: One of its former owners, Hungarian Sebastián Berzeviczy, travelled to South America in the 18th Century and allegedly fell in love with Incan princess Barbola Atahualpa Inca Ulloa, a union of which produced a daughter, Umina. Umina then met and married Andrés Amaru, the nephew of the influential Incan revolutionary Túpac Amaru II. From this union, their son Anton was born, whose lineage posed a threat to the ruling Spaniards. Before Grandpa Sebastián fled with the family to Italy, they were handed The Sacred Scrolls of the Incas, which (of course) held the location of hidden treasure. Andrés died suspiciously in Italy and Sebastián took Umina and Anton back to Niedzica, where Umina was allegedly assassinated sometime later. Anton had been intrusted with the supposed-whereabouts of Incan treasure but took it to his grave. Needless to say, some still like to believe that the family hid Incan treasure somewhere within the castle or castle grounds!
Show on map