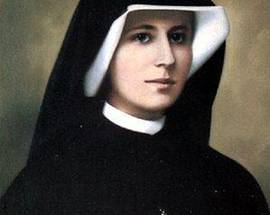 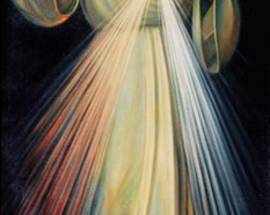 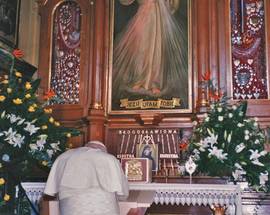 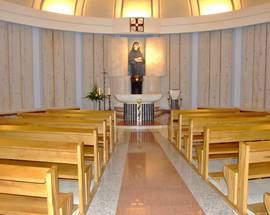 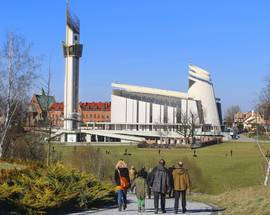 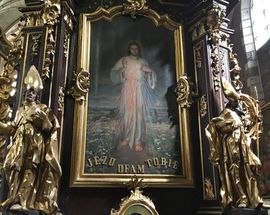 The only saint to be granted the status of “Secretary of Divine Mercy” by Jesus (and by the Church), St. Faustyna Kowalska experienced frequent and elaborate visions of Christ throughout her short 33-year life, writing down their content in a diary, later published as a 700-page tome titled Diary: Divine Mercy in My Soul. The mystic was born in the village of Głogowiec, near Łódź, in 1905, and from the age of seven knew that she wished to become a nun. Her parents disapproved vehemently, however, and compelled her to work as a housekeeper in order to help the family’s financial situation. Young Faustyna was leading a fairly typical life until age nineteen, when - while at a dance party in the park with her sister (insert snark here) - she was stopped mid-twist by a vision of the suffering Jesus. During feverish prayer at the Cathedral the next day, she came to understand how vain and empty her life had been in the past few years and received the divine command to move to Warsaw and join a convent. This proved to be easier said than done: most of the convents she visited turned her away, and when she finally found one that did not - the Congregation of the Sisters of Our Lady of Mercy - she was told that she needed to hand over a dowry to join, leading her to spend an additional year working and saving up money. This successfully accomplished, she spent the next thirteen years of her life dutifully moving from city to city with the sisters (eventually winding up in Kraków), working in the kitchen and garden, and proving to have the closest relationship to the divine among her convent: apart from recurrent visions and conversations with God, she was said to experience hidden stigmata, bilocation (being present in two places at the same time), the ability to read people’s souls and tell prophecies, tormentation by demons, and a mystical marriage to Christ. Sadly, Faustyna also experienced something decidedly more this-worldly: tuberculosis. Initially unrecognised, the disease eventually caused her to be admitted to the Infectious Diseases Hospital in Kraków’s Prądnik district. The state of her health improved substantially following treatment, which was assumed to the result be a miracle. Unfortunately, the improvement didn’t stick, and Faustyna perceived the illness to be a punishment for her sins. She died in October of 1938 at the Łagiewniki convent, in the presence of two fellow sisters. Her remains are kept in the Sanctuary of Divine Mercy in Łagiewniki underneath a painting all Poles have seen reproduced on countless postcards, holy pictures, and various religious memorabilia: the ‘Divine Mercy’ image painted in 1944 by Adolf Hyła in accordance with one of Faustyna’s visions.

ul. Św. Siostry Faustyny 3 (Łagiewniki)
/krakow/sanctuary-of-divine-mercy_68124v
Located in the southern suburbs of Kraków, the Sanctuary of Divine Mercy includes a new basilica, and the 19th-century convent of nun and mystic Faustyna …
see more